Erik Spoelstra has one of the greatest NBA coaching resumes of all time. It’s time to give him some more respect.

With tonight’s win over the Celtics in the Eastern Conference Finals, Spoelstra has won the 8th most playoff games in NBA history en route to his fifth NBA Finals appearance.

Erik Spoelstra is the cranberry sauce of the proverbial NBA coaches Thanksgiving dinner.

He’s always there, you forget he’s there, then you have some and remember, “This stuff is actually pretty good.”

Spoelstra does have a caveat about his career thus far. For every championship he’s won, he had one of the first real superteams in NBA history.

So how does this guy keep his job for so long with such little success?

Easy- Spoelstra is a genius.

I don’t think this is a stretch when I say this, but I think Erik Spoelstra could be the next Gregg Popovich.

I always thought once Pat Riley calls it quits as team President, the Miami Heat should hand the keys over to Erik Spoelstra. He’s really earned his stripes in this league, and has kept himself relevant in a situation where most other coaches would falter.

Spoelstra took the job after Riley’s last season as coach, a 15-67 stinker. Not only that, but many believe Riley forced out prior coach Stan Van Gundy. All Van Gundy did was lead the Heat to three straight playoff appearances and an NBA title in three seasons.

Spoelstra was also seen as a teacher’s pet/lame duck coach like Jason Garrett and Jerry Jones with the Dallas Cowboys.

He’s also forgotten because of the LeBron James years.

He’s overshadowed by the greatness that surrounded him, but great coaches know how to get the best out of great players.

Spoelstra’s story is also so incredible.

Coming out of the University of Portland, Spoelstra wanted to be a coach in the NBA. Nothing was going to stop him from attaining that dream.

He got a gig in the film room with the Miami Heat. Read that again – Erik Spoelstra started one of the greatest coaching careers in NBA history via editing video.

That is one of the hardest jobs to have in sports. A lot of times, these guys aren’t even full time employees because they make such little money.

Spoelstra took it as a full time position, and was a part-time janitor on the side. All just to live his dream.

After a long stint watching tape for the Heat, he finally got the call to be the full time assistant coach under Pat Reilly.

Once Riley moved into the front office, it was Spoelstra’s time to shine.

He was already an NBA champion as he started year one, and did not look back.

He filled his shelves with awards and accolades, and has compiled a career record of 523-363. He’s won 59% of his regular season games and is the second-longest tenured coach (behind Popp) in the league. 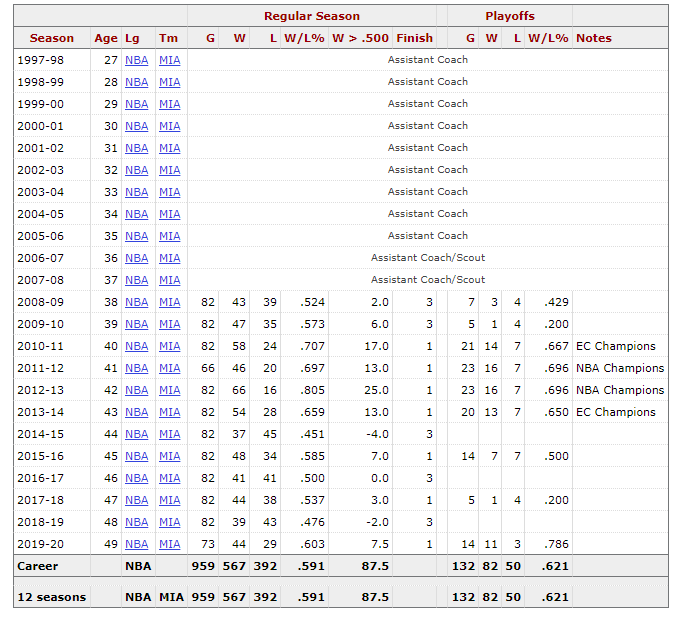 His teams have made the playoffs in nine of his 12 seasons. His career record in the playoffs is 82-50, winning 62% of his games.

This guy isn’t one of the greatest NBA coaches ever, but he is one of the forgotten greats. Think about what could’ve gone wrong for Spoelstra.

He could’ve been like Isiah Thomas in New York. Absolutely awful with an incredibly talented offense.

Instead, he’s got rings, awards, records and wins.

THAT is what makes Erik Spoelstra the best coach you forgot about.