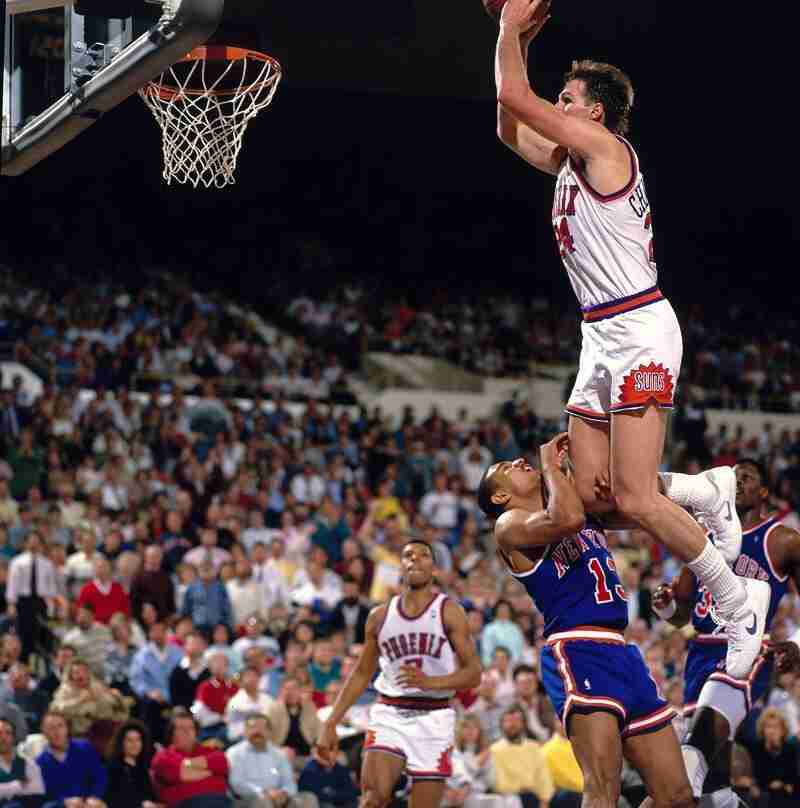 On January 27th, 1989, Tom Chambers executed the best dunk ever and easily the best in NBA history. Before he was stuffing your earholes with useless drivel via ESPN and ABC, Mark Jackson was getting the ball stuffed down his throat by Tom Chambers on national TV.

In the fourth quarter of an eventual 132-130 victory, Chambers made a hapless victim of Knicks guard and former flunky Golden State Warriors coach Mark Jackson. Chambers was so high he could’ve easily flushed it on 12 foot rim.

“It was one of those things where I didn’t have time to stop and go around. So I just tried to get myself to the rim and I was able to do that- and literally jumped over Mark Jackson,“ said Chambers in an interview years later.

Chambers was having a great game and ended up with 36 points, but the only two that anyone remembers are from this dunk. Check out the commentary from NBA All-Star Mitch Richmond:

“He tried to protect himself and maybe gave me more of a push because I had to duck my head when I was coming down from the dunk.“

A couple years ago when DeAndre Jordan dunked on the Pistons Brandon Knight, Jackson was asked how it felt to get dunked on in such a ridiculous fashion.

“It’s funny because I’ve seen people say he made the right play and they’re right, but nobody ever said I was trying to take a charge and what a great play by me,” Jackson said. “They just say I got dunked on, accept it.”

“The funny thing is that the people talking about the lists of the dunks and the younger announcers forget about it until you can tell the one with a little bit of gray hair says ‘What about the Mark Jackson one?’” he said. “Then all of a sudden it lights up and it was comical because a lot of my players didn’t know it was me.

“They were talked about the Tom Chambers dunk and a couple of the older guys said it was me in the picture. Then all of a sudden it’s ‘That was you Coach.’ It’s a bad memory. A bad, bad memory.”

Almost as bad a memory as that one time he was the coach of an underachieving Warriors squad that immediately turned into an NBA champion after he was fired. The Warriors made the Finals in the three straight seasons (two titles) after Jackson was canned.

Continue to wet your beak with these: