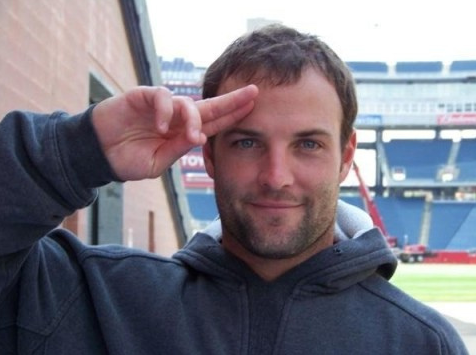 Wes Welker is a player that any fan can relate to, which is what makes him such a great pitch-man for Old Spice and the new “Unnecessary Freshness” campaign. But when you look at Welker’s career and laundry list of  accomplishments, it becomes apparent that you are looking at the body of work befitting a future NFL Hall of Famer.

Welker even holds the Dolphins‘ all-time records for total kickoff returns, kickoff return yardage and total punt returns. Only one player in NFL history, Gale Sayers, had more all-purpose yards in his first three NFL seasons than Welker did with the Dolphins. Legendary NFL head coach Marty Schottenheimer has called cutting Welker from the Chargers in 2004 “the biggest mistake (he) ever made.”

Right off the bat, I’m not going to ask you any questions about comparing Tom Brady and Peyton Manning, okay?

Okay, sounds great man. I’ve had so many of those lately it’s almost normal.

Tell me about Old Spice. What’s up with the “Unnecessary Freshness” campaign?

It’s been a really cool deal. I think you’ve seen a lot of their commercials in the past and the way they are, so I was really excited to get to do all the commercials and all that stuff. We’re basically celebrating the new season and the brand’s Fresh Collection lineup and reminding fans to of the importance of “unnecessary freshness.” They can check everything out on YouTube and see all the videos and the crazy stuff like me being in a snow globe, my legs being eaten by lizards. Or some of the print stuff, where there’s a shark eating my legs. Its kinda funny when I’m shooting this because the director is like, “OK, so imagine there is a shark eating your legs right there.” I’m like, “Really — there’s gonna be a shark eating my legs?” They do a great job with it, it’s been really cool.

You’ve played under some of the most noteworthy coaches in football history: Marty Schottenheimer, Nick Saban, Bill Belichick and now John Fox is in that pantheon too. Who did you learn the most from and whose style did you appreciate the most?

Oh man, I tell ya, I’ve learned so much from all of them. Marty, just how he was with the players and really getting g guys going, that being my first training camp, just how hard training camp was. And how tough it was, especially with an old school guy like him. It was really cool. But getting cut by hi was a low point in my professional career. I had a really solid preseason and thought I’d make the Chargers’ squad. It was very emotional when I got cut. It seemed like the end of it all.

There’s been a lot of great coaches along the line, but I think I’ve pulled something from all the coaches. From Belichick, I learned about preparation and the way he prepares his teams and the way he gets them ready is high up there. Coach Saban was along those same lines as well, definitely had some tough training camps down in Miami. And Coach Fox does a great job of keeping everyone in line and staying on top of everybody and gets the most out of everyone. It’s been cool to see all the different angles from all those coaches.

How does your weight fluctuate during the season. Is it hard to maintain weight during the long NFL season?

Not really. During the season, I watch what I eat, but just try to stay on top of my diet and just make sure I’m getting enough protein, carbs and stuff so I can go out there and do my job. I wouldn’t say it fluctuates too much. I stay at about 185 , maybe down to 182 during the season and then maybe 187 during the off season, because I’m having a few brownie sundaes or something.

As a wide receiver who takes  a lot of hits, what does a “stinger” actually feel like?

You just feel like a numbness run through your body.

Exactly (laughing). I guess so. I’ve been lucky enough to not experience that, hopefully I’m not on that end. I’d say that’s a good way to describe it (laughing). But no, I’d say it’s a numbness a lot of times in your shoulder or neck running through there, and you feel almost like a vibrating sensation through your arm.

When you look back at your career, are you amazed at how far you’ve come? You’ve set records at every stop, with the Dolphins and the Patriots. Only Gale Sayers has more all-purpose yards in three years than you did in Miami. How do you feel when you think about that?

I pinch myself all the time. Just knowing where I came from and how hard it was to get here, and it’s been pretty remarkable. I feel there’s a lot more to accomplish, a lot more to do and I think back to those times whenever I’m feeling sorry for myself or anything else. Just to push it further and be on top of everything.

What accomplishment are you most proud of?

I really don’t think about it too much. I’d say just making it to the NFL. That was the first stepping stone to get where I’m at. I could’ve very easily been cut and on the streets and that would be the end of my career. I got cut by Marty Schottenheimer. So, just getting the opportunity is good enough for me.

Which defender do you enjoy beating the most, current or past? Is there one guy that stands out?

Oh man, I enjoy beating any of them, in this league. It’s a good feeling. So I won’t say there’s one over another, I enjoy any time that happens on the field.

How do you develop the chemistry you have in Denver already compared to other wide receivers and quarterbacks in the league who spend years together and never develop that?

You listen to the quarterback and run routes the way they want them ran. And if you do that, no matter what you think, they’re the one making the decision on throwing the ball and everything else. So doing what you’re told and being in the right spot, if you do that offensively, it works out well.

I almost slipped into a Peyton Manning question there. Dammit, I said his name.

It’s all good man, don’t worry about it.