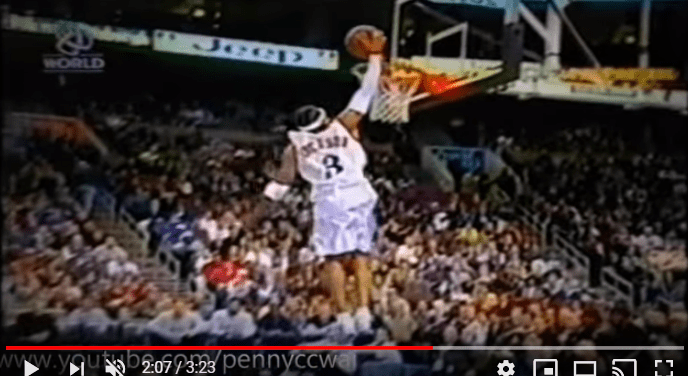 Great dunks come in all shapes and sizes, but something about a six-footer stuffing on a big man really does it for me. I made the list and I still can’t decide who the best shortest NBA dunker is.

Is there any other player as sneaky good as Rondo? His freakishly long arms allow him to be good at everything, not the least of which is is ability to cram it down your pie hole. Known “just” as a great assist man, Rondo’s dunk highlight real is pretty insane.

Iverson was such an amazing all around scorer, the ability to score via dunk, and his leaping ability, is somewhat overlooked. Especially younger AI, who took the league by storm with dunks like this one:

His ability to dunk with two hands from a complete standstill is ridiculous. When he came into the league, shook Jordan, went off in Madison Square Garden, there was no better player in the league, no jersey that more people wanted to own.

His ability to dunk with two hands from a complete standstill is ridiculous. When he came into the league, shook Jordan, went off in Madison Square Garden, there was no better player in the league, no jersey that more people wanted to own.

Couldn’t omit the three-time dunk champion from this list of best shortest NBA dunker. At 5-9, he has the full repertoire of dunks usually reserved for someone over 6-4.

Has there ever been a better dunk by a little guy on a big man, in NBA History than his dunk over Hakeem Olajuwon? Well, maybe the second video posted below over Mark Eaton, fresh off of his appearance as Jeremy Evans‘ prop in the dunk contest a few weeks ago.

Spud is known for winning the 1986 dunk contest in Dallas when no one expected it. But what is really amazing, is how this 5-7 guard used the dunk as a weapon during NBA games. He could do some amazing trick dunks in contests, but he was a threat to dunk anytime he had the ball and used that skill, and his quickness, to open up his jump shot, which was better than he gets credit for.

Pack was a guy who had too much energy for his body. The minute he got the ball and attacked the basket, he went into “Turbo” mode like in NBA Jam. Maybe the most explosive “short” dunker ever? He dunked over big men constantly, like a hapless Shelton Jones at the 0:41 mark.We can only hope that heaven consists of an endless loop of Robert Pack dunks. It would all be worth it.

You probably forgot about “Zeke” and his crazy hops, and even what a great pro he was in light of the myriad bad decisions he’s made as a coach and front office man. Or the time Isiah Thomas killed the Continental Basketball Association.

But Thomas could leap for a smaller guard. Check out the two-handed stuff on a break against the Knicks at the end of this highlight reel:

LOB City QB can throw it down just when you decide to sleep on him.

Who did I miss? Who do YOU think is the greatest, shortest NBA dunker?