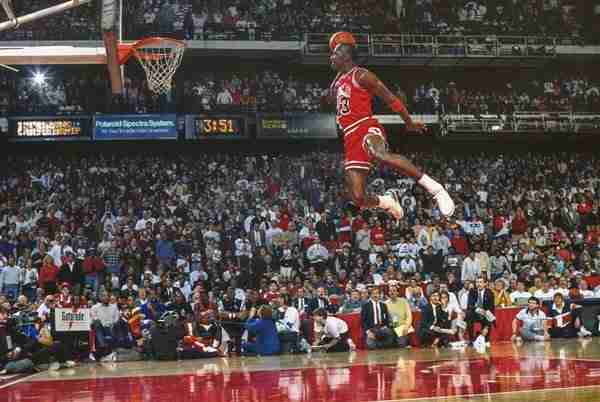 What images leap to your mind when you hear the phrase, “Best NBA dunk contest ever?” There have certainly been some epic match-ups that made this even the centerpiece of the NBA’s All-Star Weekend.

To this day, from start to finish, this was the best dunk contest I have ever seen. Each competitor brought their A game from minute one and it was obvious how fiercely contested the title was going to be from the first dunk. The field of dunkers was absolutely stacked- Jerry Stackhouse, Vince Carter, Tracy McGrady, Stevie “Franchise” Francis, Ricky Davis and Larry Hughes. The finals of Carter, McGrady and Francis was like a heavyweight fight, with each guy giving and receiving the best of what they had to offer.  Ultimately Vince Carter’s performance would overpower everyone else with an incredible array of leaping ability and creativity.

To this day watching these highlights it just seems impossible that this ever happened. A 5-7 guy goes head to head with Dominique Wilkins in his prime in a dunk contest- and wins? No way. It just looks comical to see Webb’s little body, jumping to incredible heights doing incredible things. Webb is easily one of the most underrated dunkers of all-time, still. Terence Stansbury, Roy Hinson, Paul Pressey, Jerome Kersey, Gerald Wilkins and Terry Tyler rounded out a solid field, with “Nique and Webb meeting in the finals. Webb would prevail and become the ultimate “People’s Champ” in terms of dunk contest victors.

Jordan vs. Wilkins in this classic match-up set the prototype for what everyone wanted to see in a dunk contest. Held at the old Chicago Stadium, Jordan wowed the hometown crowd took home the hardware, thanks in part to a final round 50, which gave him the victory by 2 points of Wilkins. To this day a lot of people think Nique deserved higher than a 45 on his final dunk, but the fact that he didn’t score higher, set the perfect dramatic stage for a Jordan victory. The field of competitors in this contest was solid as well- Clyde Drexler, Spud Webb, Otis Smith, Greg Anderson and Jerome Kersey.

This contest is best remembered for Miner versus JR Rider, the previous two winners of the contest going head to head to determine the undisputed champ. The overall field wasn’t great and served more as a prelude of dunks to the head to head match-up everyone wanted to see. Antonio Harvey, Jamie Watson, Tim Perry and Tony Dumas served essentially as warm-up dunkers to get the crowd hyped, never really offering much competition for the big dogs. In the finals, Miner overpowered Rider and was definitely the better dunker of the two, on that day.

This could easily be the most overlooked dunk contest ever. Richardson and Desmond Mason, both defending dunk champions, looked horns in a great final round battle that a lot of people seem to have forgotten about. The other two competitors, Amare Stoudemire and Richard Jefferson, also added some entertaining dunks. J Rich evolved into a solid outside shooter as he aged, but in his younger days he was an incredible leaper, as was Mason. One of the last great head to head battles.

Which dunk contest do you think is the best of all-time?