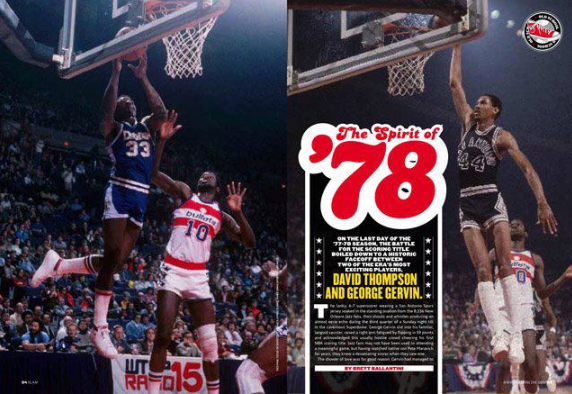 Today in 1978 the NBA scoring title was on the line with one game remaining.

Thompson’s Denver squad played the Pistons in Detroit and David Thompson the “Skywalker” got off to a ridiculous start, setting an NBA record by making 13 field goals in the first quarter. Thompson sums up his feelings in his book, Skywalker:

“Not realizing what had just occurred — it all happened so fast — I was amazed to learn later that I had set an NBA record for most points in a quarter with 32. That beat Wilt Chamberlain’s 1962 mark by one, set in that historic game where Wilt scored 100 points. Equally stunning was my accuracy in that first quarter. I went 13-14 from the field (Poquette’s block being the only shot I missed) and 6-6 from the foul line.

“My 13 field goals were also a new NBA record, and it still stands to this day.”

He continued his torrid pace for the remainder of the game, finishing with a total of 73 points, the most ever for a guard in NBA history, until Kobe broke it with his 81 point game.

Remember though, neither Thompson nor George Gervin had the advantage of the three-point shot.

“I had been locked in a scoring duel with Gervin of the Spurs for much of the year. Only 14 points separated us at the top of the league scoring chart heading into our last games that Sunday.”

Speaking of Gervin, later that evening “The Iceman” poured in a cool 63 points (probably without sweating) and just barely edged out Thompson by the slimmest of margins, the closest in NBA history, to win the 1978 scoring title: 27.22 to 27.15.

After scoring 73 points, the first thing Thompson did when he got home was check in on Gervin’s progress.

“When I finally made it home, I scanned the dial on the radio and attempted to pick up the San Antonio versus New Orleans broadcast. If it had been any player other than “The Iceman,” I wouldn’t have even bothered. I caught the game early into the second quarter, and by halftime Gervin had fired in 53 points. I knew then that my 73 had been in vain.”

Even though Thompson lost the scoring title, his value as an NBA player was at its apex.

He was rewarded during the off-season with a record breaking contract; $4 million dollars for five years. That was the most any basketball player had been paid in NBA history. What do you think Kobe or LeBron James would say if that got offered that deal today? The game has come a long way.

The closest match-up in recent memory to the slugfest between Thompson and Gervin was in 1995 when David Robinson and Shaquille O’Neal went at it for the scoring title, which also came down to the final regular season game. Robinson scored 71 points and edged Shaq 29.8 to 29.3.