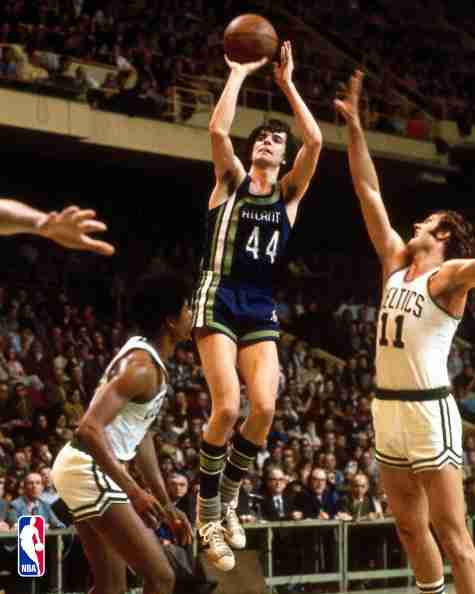 36 years ago today, “Pistol” Pete Maravich had the most productive scoring performance of his NBA career. Maravich’s mark on the game is still felt today.

Against the New York Knicks, Maravich made 26 field goals and 16 of 19 free throws to total 68 points in a 124-107 victory. Only five players have ever scored more than 68 points in a game.

Maravich’s career game came in the middle of a season where he would lead the league in scoring, averaging 31.1 ppg. In addition to the scoring, he averaged 5.4 assists, 5.1 rebounds and 1.4 steals per game while shooting 83% from the free throw line. In that same year he lead the league in minutes, and had one of the most productive individual seasons in NBA history, even to this day.

Known as a scorer, Maravich was equally adept at passing, averaging 5.4 assists per game in his career. But perhaps his greatest contribution came in the realm of imagination, making passes and scoring baskets in ways people had never seen, never even conceived to that point. Maravich saw the game in a completely different way than anyone else ever had and because of it, the overall game, and league, evolved.

During Maravich’s 10 year career, the three pointer was only instituted in three of them, his final three years in the league. In those three years, he shot an astounding 66% from deep, connecting on 10 of 15 career attempts. His career 24.2 ppg average would’ve been at least a couple points higher had he played a little later, but either way his scoring prowess was only one part of an overall game that was skilled in all facets.

But numbers alone don’t do him justice. His contributions to the game in terms of ball handling and court awareness rival what legendary Bob Cousy did for his era.

Maravich died way too young, at the age of 40 playing pick-up basketball in a gym at a church. He literally dedicated his life to basketball.

Who Was The Purest NBA Three Point Shooter of The 90s?...