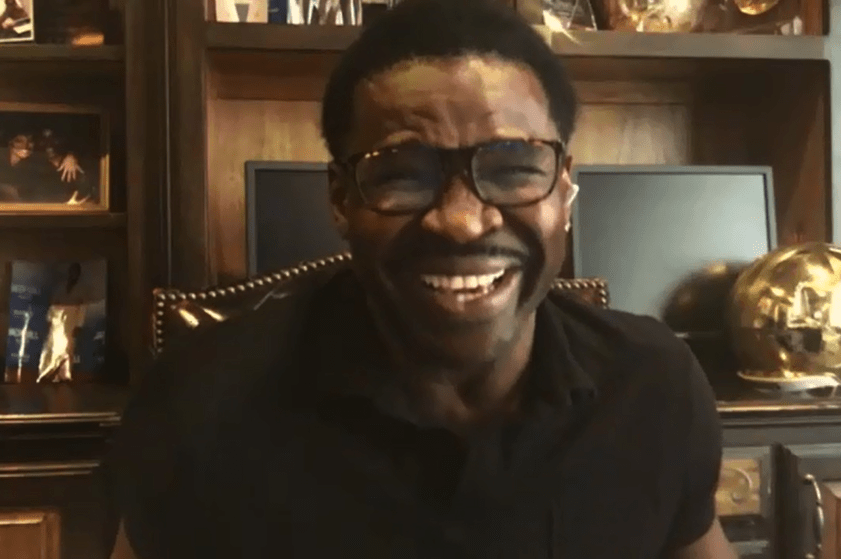 Michael Irvin was a player defined by his will power and toughness on the field as much as his physical skills.

“The Playmaker” was the 15th of 17 children and had to work for everything he could get his hands on as a kid. And that approach and upbringing led to him becoming one of the greatest wide receivers in the history of the NFL.

The native of Ft. Lauderdale, Florida started at the University of Miami under future Dallas Cowboys head coach, Jimmy Johnson.

He was a first team All-American that set Miami career records for receptions, receiving yards, and receiving TDs. It culminated with the Hurricanes winning the 1987 National Championship.

From there he was drafted 11th overall in the 1988 NFL Draft. Ironically, it was the last first round selection made by iconic Cowboys’ coach Tom Landry. Ironic because jimmy Johnson would replace Landry just one year later as head coach.

At 6’2″ and 207 pounds, Irvin was a big, physical receiver who manhandled cornerbacks. In part because of Irvin’s ability to push off the defender with such ease, the NFL eventually changed its rules to adjust to wide receivers who emulated Irvin’s physical style.

Here’s what Michael said about his approach to taking on DBs:

“It’s something you should always think about. I tell young guys, how often are you going to play this dude? Say your opponent is in the NFC East and he’s a big trying to play physical. I could probably go around him. But since I’m going to see him twice a year, I’m gonna run through him.

“When I attack his weakness, he can be like, “oh, ok he beat my weakness. I’m just going to get physical now.”

“But if I come out and attack that strength – BAM, BAM, BAM (punches fist 3 times) – and I’m physical with you. The guy is like, “Oh my God, I don’t want to see this dude coach.”

And not even just that one time we play you. But if we play in the same division, you’re going to be thinking about that twice a year.”

Who was the best cornerback you ever played against?

Everson Walls was the best cornerback in the world. Early on when I got into the league, I remember the first time I went against Everson Walls. He came up, acted like he was going to jam me, then walked back, then came back and jammed me. And I fell to the ground.

And that’s when someone said to me, “why are you trying to run around him? Just go through him.” And that started that mindset I mentioned.

I’m not Tyreek Hill, I’m not Julio Jones. I don’t have that kind of speed. I don’t have time to waste. I’ve got to go through you to get to that football.

How does imposing your will and outsmarting your opponents like you mentioned about Everson Walls impact your approach to your life off of the field, day to day?

Well, it’s still the same. This is what’s hard about retirement from football. You have to understand you are not a football player anymore. I went to see my doctor because my knees were bad. And the doctor said, “You’ve got to stop running. Your knees are gone, no more running.”

Me and my wife left the doctors office and went home and I started getting dressed. And my wife said, “Where are you going?” And I said, “I am going running.” She said, “Didn’t you hear the doctor?” I said, “Babe, those are recommendations. He gives those to regular people – I’m not regular.”

I always think I can work though it, I can keep going. Like when I hit 40 years of age, my eyes went bad. And I’m thinking, “I can fix this.” But, you can’t – it’s not a football thing.

I went to the doctor and he said, “Oh yeah, this is presbyopia.” That’s what happens at the age of 40 and you look down at a piece of paper and see spots instead of letters.  So I started wearing the #1 progressive lens and it changed my life. I needed to know that. I was going to try and fix it myself which was impossible. So if you’re going though that, you need to see a doctor. And ask him about the #1 progressively lens in the world, varilux. essilorusa.com.

Is it weird for you to watch Cowboys’ games now and see another wide receiver wearing #88?

Actually it is not weird – I love it. Let me break this down for you, because Drew Pearson broke it down for me. I said, “Drew, I don’t want to do this.” He said, “No – wear it. But don’t just wear it, make my ceiling your floor.”

And then he said, “Michael if they retire it, it goes in the rafters. And the only time we see the number is when I leave the earth and go to eternity, then they pan up during the game and talk about me, then go right back to the game. But if you wear it, every time you make a play, I get my flowers.”

So now, every time Cede Lamp or Dez Bryant makes a play, they talk about me. If one of those guys drops a ball, they say “Michael Irvin would not have dropped that.” So I get my flower.

Every Sunday, I get my flowers – I don’t have to wait until I go to eternity.

Faster in your “prime” – you or Deion Sanders?

Man, Deion. one of the greatest athletes in the world.

Who wins in a fight between Erik Williams and Mark Tuinei?

Ahh, that’s a good one! Ahh that’s a great question! Tuinei is a BAD Samoan from Hawaii, you know what I mean? But Big E is a NASTY MUG. Man, I don’t know who would win – all I know is I would not fight either one of them!

Who was the toughest dudes on those 90s Cowboys teams?

We had a lot of tough guys. And I’m gonna mention someone you might not think of, but Charles Haley. Not the biggest dude in the world, but he’s a monster man. Erik Williams got that knee operation. And Charles Haley said to him, “Ill tell you when you are ready to play.”

A year later, Big E came back on the practice field. And Charles Haley said, “He’s not ready.” They called the entire team over and they lined Erik Williams and Charles Haley up.

And Troy Aikman said, “Blue 18, Blue 18, HUT” and snapped the ball. And these two men came off the line…and I have never seen anything like that in my life. It was so loud, you could hear it EVERYWHERE.

They collided and they both got up and looked at each other. Erik Williams said, “He’s READY” and the whole team went “CRAZY.”

Charles Haley was the toughest dude on those Cowboys teams.

Were you on the practice field the day Jimmy Johnson uttered the famous like to your kicker, “The asthma field is over there.”?

I was on the practice field. And you did NOT laugh – you were always serious with Jimmy. What tripped me out was to learn years later that Jimmy had asthma! YES! Coach, how are you kicking that man out for having asthma and YOU had asthma?”

Tell me a great under the radar Jimmy Johnson story.

I came in one day, me and another player went out on a Thursday night. We’d go out to eat and then we went out. We came in the next day and we were late to meetings. We walked in at the same time.

And he said to me, “Michael you are my leader. I’m so disappointed in you. Get your butt in that meeting and you sit in that chair and you be a leader.”

Then he pointed at the other guy and said, “And you – you get your pads, get your stuff, and get the HELL OUT!” He fired him on the spot – on the spot.

What’s the biggest similarity between Jimmy Johnson and Barry Switzer?

Both are great men. They just went about things differently.

Jimmy believed that I have to press, and keep you pressed, to bring out the best out of you. Barry, who is a great man, approached it from the standpoint I’m paying these guys $5 and $6 million dollars a year – I don’t need to hover over them.

But the reality is, yes you do. Because everybody isn’t as hungry as your top guys. You have to hover over these guys.

Emmitt Troy and I went to Coach Johnson once and said, “Coach we don’t need all these pre-practice speeches” – he literally gave a speech before EVERY practice. And he said, “I know you guys don’t need it – I ain’t saying it for y’all. I’m saying it for the 53rd man on the roster and I’m not gonna stop doing it.”

Favorite play of your career? When Michael Irvin lays his head on the pillow at night and thinks about his life, what is your absolute favorite play or the one thing you go back to thinking about?

When I was a kid I used to throw rocks in the neighborhood and they’d come to my mom’s house and say, “Your son broke my windows – he’s never going to be anything.”

So then when I got into the NFL, and I scored that first TD on an ‘A route’ in Super Bowl 27, and the first thing I thought about was all those people. And how I just scored a TD in the Super Bowl in front of all of them.

And then, 18 seconds later, I caught the second TD. When I threw my leg up, spun around and jumped into the endzone – it was the greatest moment in my life.

Wanna find out more about the #1 progressive lens in the world, go to essilorusa.com. And YOU TOO can see perfectly like The Playmaker.