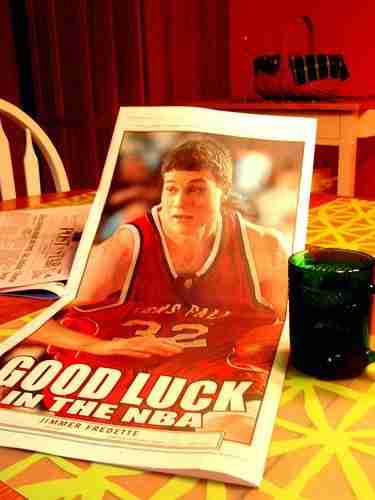 Back in June I wrote an article about everyone’s favorite collegiate gunner and three point threat Jimmer Fredette. At the time, everyone with internet access was filling up message boards talking about how “great” Jimmer would be, about his “can’t miss” skills and how they would immediately transfer to the hardwood of the NBA.”But I didn’t believe it. So I wrote an article detailing why I thought he would be a bust at the NBA level and further, that if he was lucky, he would have the type of pro career Orlando’s JJ Redick has carved out for himself.

And the hate streamed in almost immediately. I was called an “idiot”, and a “racist” as well as being told I “must’ve never seen Jimmer play”, because to compare him to Redick was the ultimate travesty.

But now, after almost a quarter of the season, it’s fair to say that not only was I right, but that Jimmer won’t even be as productive as Redick was in his rookie season.

After 15 games on a bad Kings team, Jimmer has started three games. But I thought he was “a starter in the NBA” because “no one could stay in front of him at the pre-draft workouts, not even Kemba Walker”?

Based on the comments, at the time, I apparently underestimated Jimmer’s overall game as a scorer, not just a shooter.

“The guy lives in the key and at the rim. Jimmer’s game is nothing like JJ Redick’s. Jimmer gets to the rim and draws contact whenever he wants. Ridiculous take.”

He can’t get to the basket anymore because why? Everyone in the NBA is quicker and stronger than he is. So all he can do is sit outside and force shots, as his 33% field goal percentage would indicate.

Oh wait but he isn’t just a “three point shooter like Redick.” Uh yeah, he sure isn’t; shooting 27% from deep shows he’s not even in Redick’s league as far as accuracy.

Since everyone loved my statistical comparisons in my first article, here are some stats of interest from Redick’s rookie year compared to Jimmer’s:

My personal favorite comment from the first article though: “If Steve Nash can make it in the league while being a defensive liability, then so can Jimmer!”

LOL!!! Oh yeah, that reminds me: Fredette is a complete defensive liability.

Another favorite:  “Mark my words, Jimmer will leave a legacy when it’s all said and done.”

I’d have no problem writing the exact opposite article and “eating crow” if things were the opposite and Jimmer was as good as he was hyped to be. But he’s not. And he won’t be.