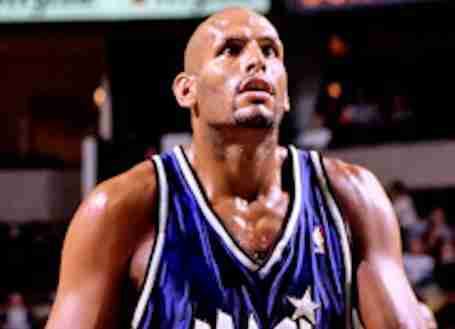 Before Jason Collins, there was John Amaechi.

In all the publicity over Jason Collins, John Amaechi hasn’t gotten enough credit for coming out.

In all the public discussions about Jason Collins, I don’t think we’ve heard enough about John Amaechi, the first NBA player I remember coming out who was still a well-known professional athlete.

In 2002, Amaechi gave an interview that accurately summed up the public climate in that regard, at that time.

“If you look at our league, minorities aren’t very well represented. There’s hardly any Hispanic players, no Asian-Americans, so that there’s no openly gay players is no real surprise. It would be like an alien dropping down from space. There’d be fear, then panic: they just wouldn’t know how to handle it.”

Amaechi made the announcement about his sexuality in February of 2007, roughly three years after his last NBA regular season game. But at the time it was a huge deal. And in some way, Amaechi doubtlessly smoothed out the terrain for more athletes to come out and be open about their sexuality.

Whether it was absorbing the initial public backlash, which he definitely felt, to putting a face on something that a lot of people weren’t comfortable talking about, Amaechi had an impact on Collins’ ability to be 100% authentic.

Amaechi had so much of an impact, I would venture to say that because of what he did combined with the evolution of public acceptance, when Collins made his announcement, it wasn’t even shocking. There was never an “Oh, WOW I can’t believe it.” moment.

Not only will it not affect his brand as an NBA player, it will probably make him more valuable from a marketing standpoint- who would’ve predicted that 20 years ago?

Sure, society has progressed and become more accepting, but Amaechi’s impact was and still is a significant benchmark.

Just imagine where we will be 10 years from now.

Who Was The Purest NBA Three Point Shooter of The 90s?