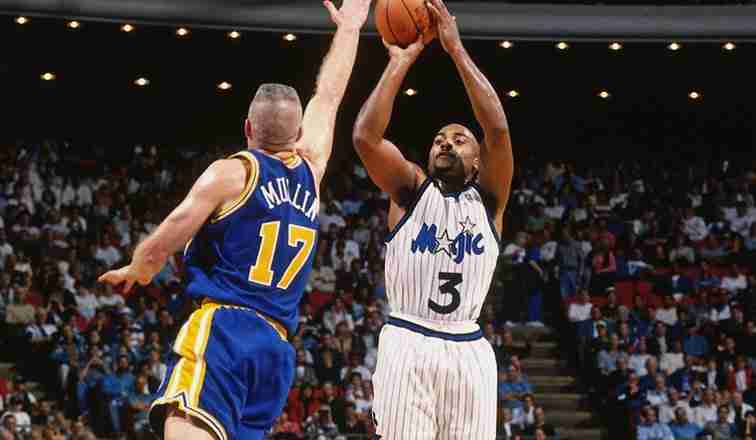 This article was borne out of the idea that Jason Kidd at one time had made the third most three-point baskets in NBA history, currently ranking ninth.

I love J Kidd, but to me, he is the antithesis of a “pure shooter”, a guy that came out of the womb knocking shots down. Kidd refined his skill to the point where he somehow gets it done but early in his career he struggled with hitting the three.

So, in the context of the three pointer, who do you immediately think of when you hear the term “pure shooter”? Here are five guys from the 90’s that came to mind immediately, with five more to come, in no particular order:

Dell Curry– Curry was maybe the most consistent three point shooter, year in and year out, of anyone on this list. From 91-92 to 98-99 he never shot less than .401% on three pointers. When you saw him set up from beyond the arc, you just knew he was going to make it. Even if he didn’t you believed his next one was because he was so smooth. Also, Curry was the proprietor of maybe the quickest release from deep as well.

Dan Majerle- “Thunder Dan” was a slasher in the early part of his career but evolved into a great three point shooter. In his fifth and sixth years he led the NBA in three’s attempted and made. In the 92-93 playoffs Majerle went off, making eight of ten three pointers in game five and set an NBA record, while hitting most of them from about 30+ feet. For his career, he made .358% of his three’s.

Chuck Person– “The Rifleman” had the coolest nickname for a three point shooter ever, no doubt. And, it perfectly summarized the way he would hoist three’s in a seemingly endless fashion from all over the floor, with unlimited range. Person and Larry Bird had a classic battle in the 1991 playoffs that is worth Googling, exchanging deep threes and big shots as if no one else was on the floor. A career .362% three point shooter his best season from beyond the arc came when he shot the most, in 95-96 with 5.8 attempts per game, making 2.4 and hitting at a 41% clip.

Jeff Hornacek- Hornacek was one of the best pure shooters in the NBA during the duration of his 14-year career. He made .403% of his three pointers during his career and tied an NBA record of 11 consecutive three pointers made in 1994-95. At another time earlier int eh same season he hit eight consecutive three’s in the same game, also an NBA record.

1 thought on “Who Was The Purest NBA Three Point Shooter of The 90s?”