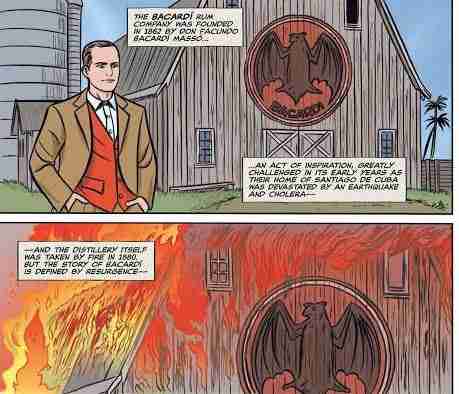 The Spirit of BACARDÍ is a graphic novel that tells the story you (probably) had no idea even existed about the iconic brand and its origins in Cuba.

Warren Ellis’  accomplishments cover writing in all its forms. His work has been featured in comic book brands Marvel, DC Comics, & Image.

He’s written novels that were turned into movies like Red and Red 2.

He’s creating a TV series with Gale Anne Hurd, executive producer of The Walking Dead and he’s working with BACARDI.

I spoke with Warren Ellis and asked him the following five questions.

PE – How do you come up with the concepts for your stories? Are they based off of personal experience, things you’re thinking about at the moment, or what?

Warren Ellis – Okay, I usually arrange accidents for people who ask me “where my ideas come from.” If I told you, then you’d go and get them too, and then I’d be out of work and living on the street with my family. Is that what you want? Do you want to make me homeless?

PE – No. But if you were, we could be roommates. When is your favorite time to write; when are you most creative? And where do you write? Do you have a favorite desk, spot, etc?

Warren Ellis – I’ve always written anywhere I can sit down. Bars, late-night diners, airplanes, hotel rooms, trains, garden tables. Anywhere I can put a notebook or a keyboard down.

PE – How much creative license do you have, with huge brands/titles like Iron Man & Ultimate Fantastic Four? Are their parameters you have to stay within? How difficult (or strict) is it to stay within previously defined story lines?

Warren Ellis – There are always parameters with the company-owned work. But you just don’t be stupid about it. Common sense dictates that there are things that will damage, taint or make useless a thing that doesn’t belong to you, so you don’t do it. If someone hires me to repaint their home to make it beautiful, and I do nothing but cover it with penis drawings, I haven’t fulfilled the terms of the hire and they have a right to be unhappy. I’m hired to reactivate or reinvent their properties in order to make them useful to the company again, and they pay me well to do it.

PE – In your earlier career and now presently, what inspires you? What makes you want to write and continue writing?

Warren Ellis – Everything inspires me. Look outside. This is a huge, busy and chaotic world that is creating new things every single day. Every single hour. Look at the world and try not to be inspired to pick something up and make a story about it. It’s impossible.

PE – In your view, what happens to us after we die/leave the physical?

Warren Ellis – We go in the dirt. End of story.