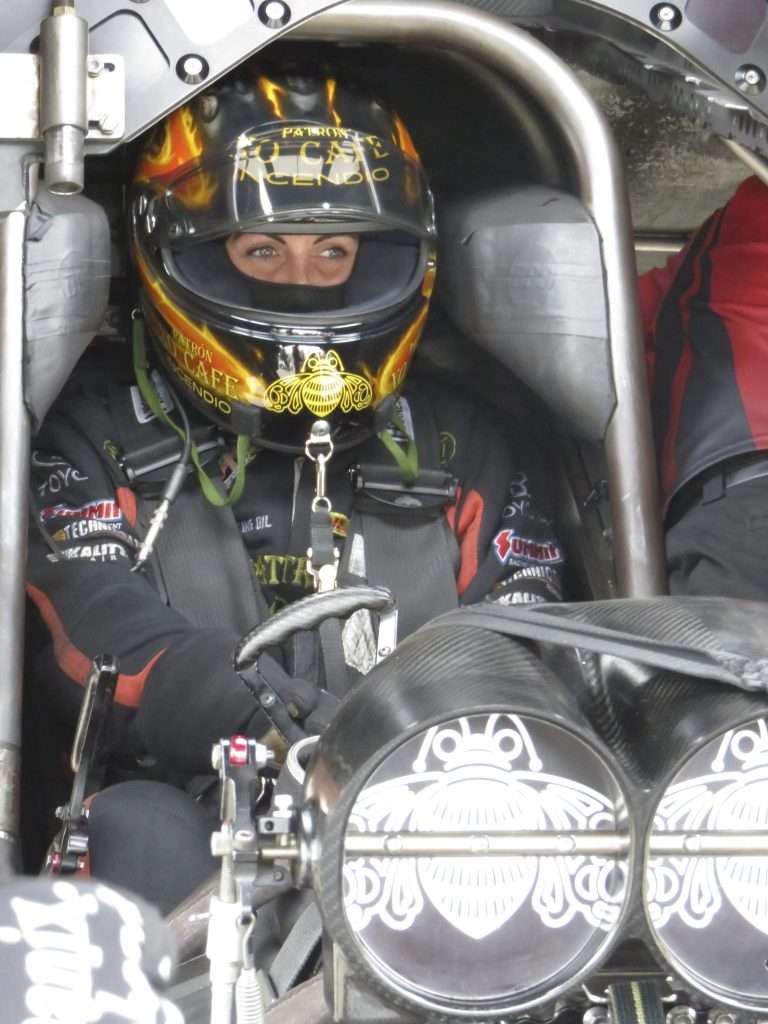 To some people, Alexis DeJoria is the wife of “Moster Garage” star Jesse James. To others, she is the daughter of Jean-Paul DeJoria (read my interview with him here, best life story evah), billionaire businessman and co-founder of Paul Mitchell hair products and the Patron Spirits Company. But on the NHRA Mello Yello circuit, Alexis DeJoria is one of the best Funny Car drivers on the tour.

I spent two days with Alexis and her team from Kalitta Motorsports at the Kansas Nationals at Heartland Park in Topeka, and inadvertently found ourselves in the middle of the most exciting weekend in the history of the sport.

The day before we arrived, during the second day of qualifying, DeJoria ran the best run of her career, an Elapsed Time (ET) of 3.994.

In this video, Alexis talks about how her car accelerates faster than anything on earth (yes, even a fighter jet), how she got into racing, and her career-defining victory in the 2014 NHRA U.S. Nationals, it’s 60th anniversary, a feat akin to winning the Super Bowl.

While ET (the time it takes the car to get from the starting line to finish line) determines qualifying order, it is not as important on race day.

On race days, the car that crosses the finish line first wins, regardless of ET. So the quicker car might not be the winning car, because that driver may have left the starting line slower. 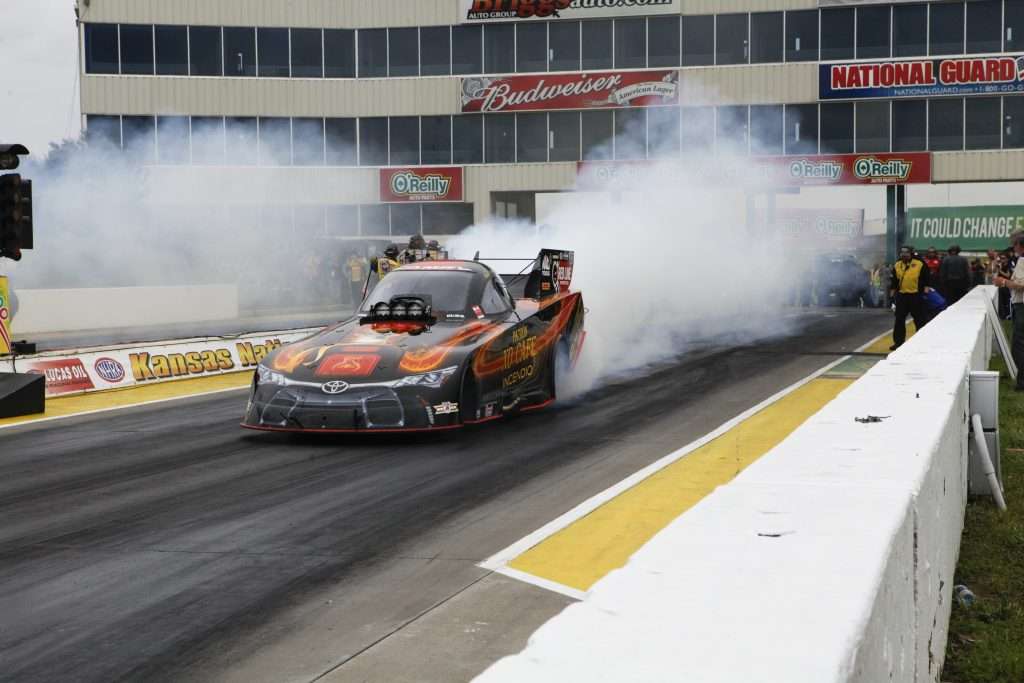 For any driver, a time in the low fours is considered a successful run. But in Kansas on this weekend, the perfect storm of weather conditions and high performance vehicles combined for the most sub-four runs in one weekend, ever.

So what does that even mean? Each run, or “pass” is 1,000 feet. Going a thousand feet in under four seconds means the cars are travelling at speeds in the 300-315 MPH range. Alexis’ car goes from a complete standstill to 100 MPH in less than one second.

The gravitational force, or g force, on the body of the driver is 5.4; that’s five g’s, sucka.

Conversely, at the end of a run when the parachute is deployed to stop forward motion, the driver and vehicle endure a g-force of 5.4 from the opposite direction, to ultimately stop. 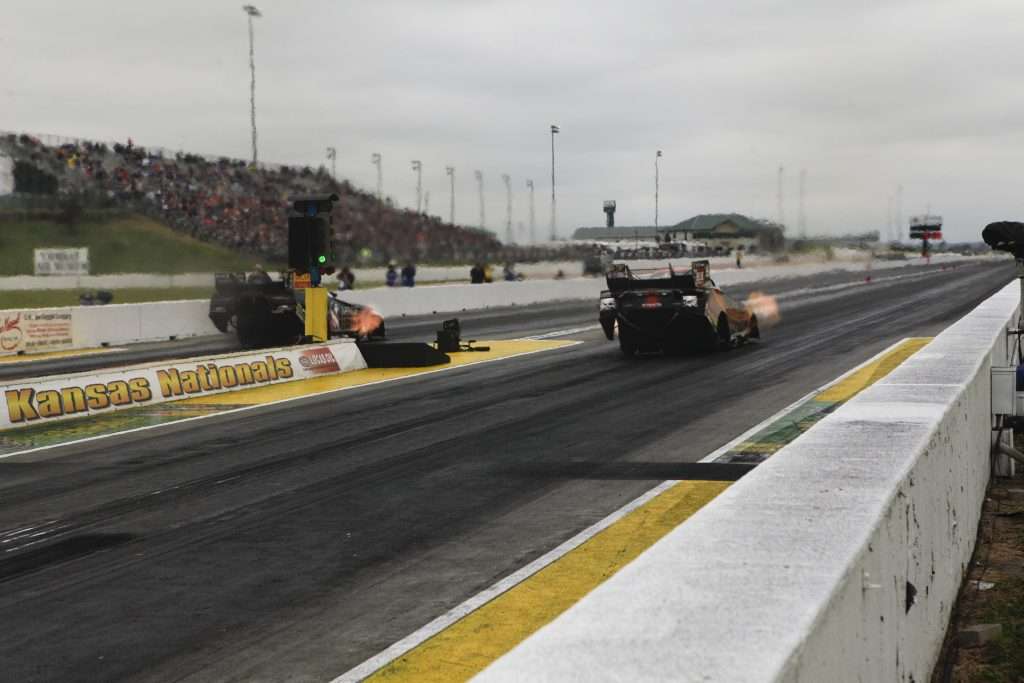 The term “break-neck speed” is tossed around liberally in describing an event of intense, higher than average speed. But the speeds that NHRA drivers drive could literally snap a person’s neck. Security and stability are so important inside the race car that the seat the driver occupies is literally called a “cockpit.”

Regardless of the fame surrounding her name, noone’s name wins a race – DeJoria has done that for herself.

Her three wins in 2014 were the most for a female driver in one season, while capturing two poles, and two track records, and an overall Top Ten finish in the standings.  Last year, she made history when she became the first woman to make a sub-four second run.

Having no context for her sub-four run in qualifying, Team Patron Assistant Crew Chief Andy Cetwinski summed it up for me. “This is the craziest racing you will ever see in your life. I’ve been doing this for 20 years and I’ve never seen anything like this. The worst I’ve ever seen someone qualify with a sub-four time was second. We ran our best run ever and we’re in seventh. It’s insane.”

Drag racing is a deliberate sport. Environmental factors like temperature, wind speed, moisture and sea level must all be accounted for at all times. Things the layman would consider inconsequential determine a successful run. The cooler temperatures and lack of sun in Topeka made for an ideal performance on the track for teams and fans. 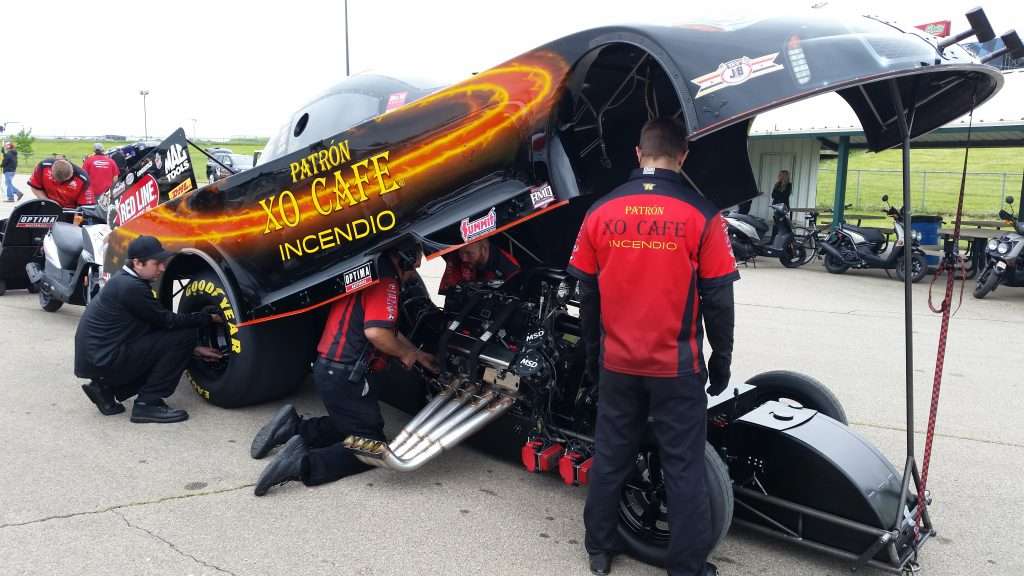 The majority of drag racing is preparation. During the 24 events that comprise a full nine-month season, drivers spend a cumulative total of roughly 20 minutes behind the wheel, also known as “Seat Time.”

The sights and sounds of pit row at an NHRA event are fully immersive and unrelenting. Unlike NASCAR where a “Hot Pass” is required to access the pits, any NHRA fan with a ticket can hang out and intermingle with their favorite drivers. 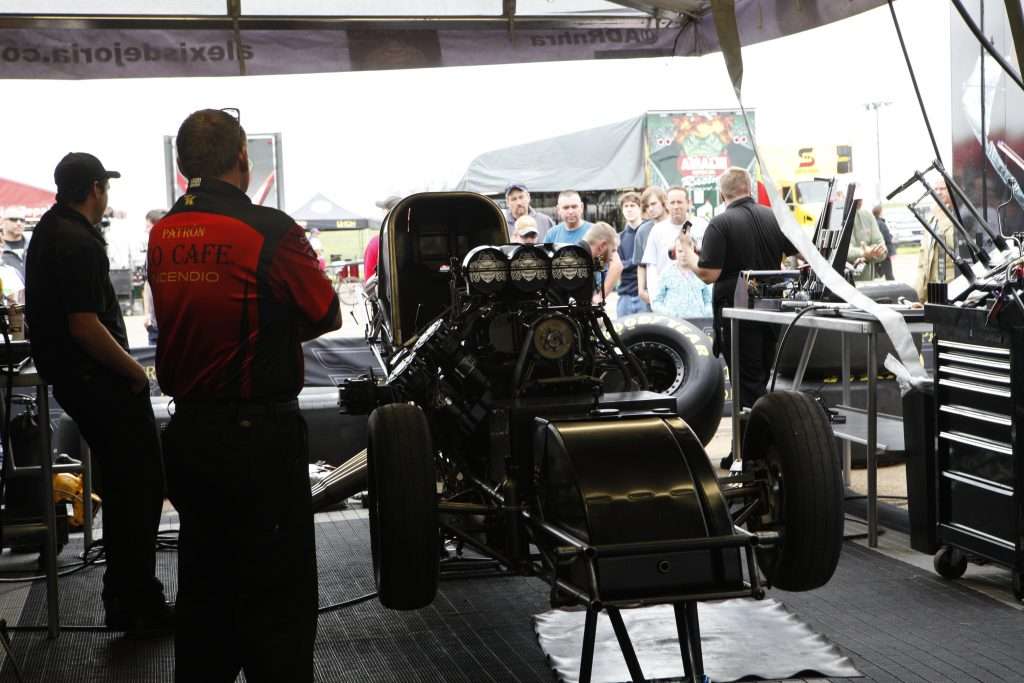 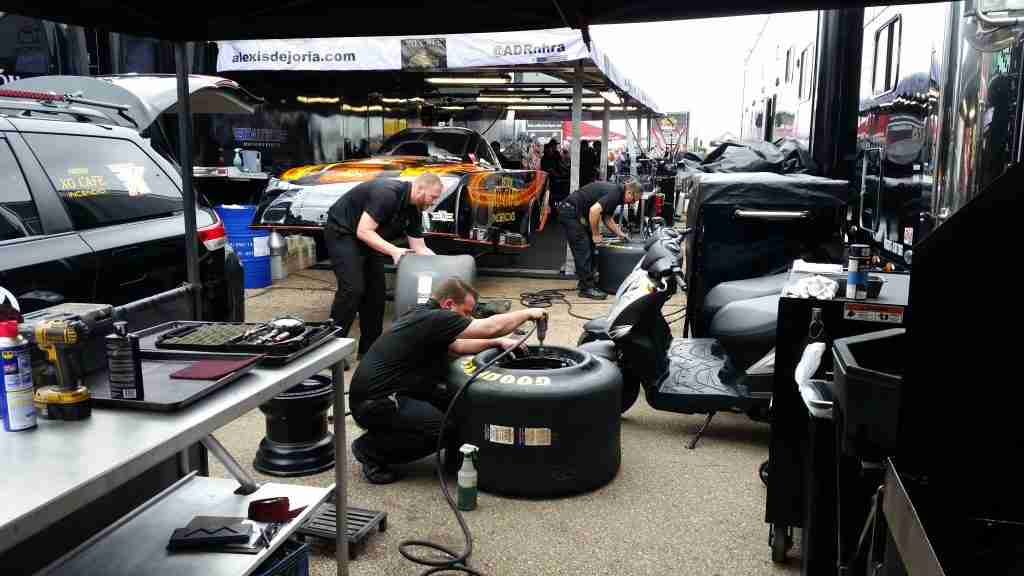 But the most captivating of all is the smell of nitromethane used for fuel, and its affect on your body. In this video, we captured the Kalitta Motorsports DHL team, anchored by driver Del Worsham, prepping the engine.

We also captured yours truly, and the affect the fumes have on your eyes and mouth. I didn’t mean to get emotional, but the tears came out on their own and the “Dido” playing in the background certainly didn’t help. As my cameraman quipped, “Everyone else on the team was wearing gas masks, now we know why.”

Nitro is incredibly volatile – it can combust without any air at all.

The race itself is a short burst, an explosion of sound and intense speeds. Seeing a car modeled after a jet, travelling over 300 MPH, is entirely captivating – you literally blink and the car is a quarter of the way through its run, 250 feet away from you.

Even though DeJoria’s qualifying time of 3.994 was her personal best, it was just seventh best after two rounds of qualifying.

The fastest time in qualifying was 3.967 by Chad Head who earned the number one seed for the elimination round. Though his time only bested Alexis’ by .027 seconds, five other drivers were stacked and slotted within that minuscule amount of time.

In this video taken during the second day of qualifying, DeJoria and Beckman squared off:

After qualifying and drawing the seventh seed, DeJoria found out her draw for the elimination round the following day was her Kalitta Motorsports teammate Del Worsham, driver of the DHL Funny Car, who secured the 10th seed with an ET of 4.013.

Hanging out with members of both Patron Racing and DHL teams that evening, every person we spoke with lamented the fact that one of the drivers would be going home early the following morning. But they were all equally quick to follow up that thought with a gruff, “But, we’re going to have to kick their ass. And they will do the same to us.”

With everything on the line the following morning, there was nothing left to do but square off and put the pedal to the medal.

Four seconds later, the race was decided. Del Worsham ran the fastest time of his life and Alexis’ day was over.

In this GIF, you can see Alexis take the lead off of the starting line:

Even after the loss, Alexis is aware of who she is and her place in the sport.

“It’s pretty remarkable for our class right now,” DeJoria said. “We’re so competitive and most of the top cars are running in the 3s. To do it all at the same race in Topeka, where it had never happened, it’s incredible. It’s the best conditions we’ve seen out here ever in what very well might be the last race we have here. It’s kind of cool to be a part of it.”