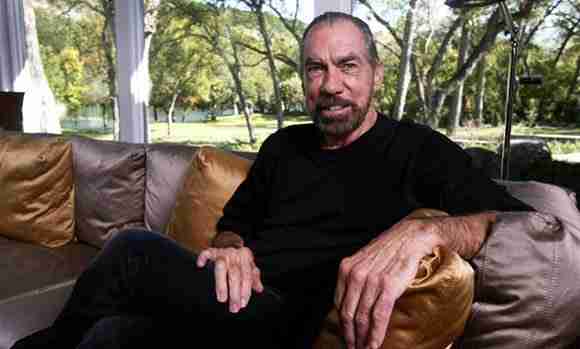 “Self-made man.” A seductive moniker that’s generally used to assert some level of mastery of the physical, of one’s destiny.

And whenever seduction is present, temptation is inherent. The temptation to apply the term liberally, when it isn’t appropriate. Because, who’s to know?

Using that term frivolously is something a man who made the trek would never do. There’s a vibration, a weight, to an accomplishment that significant.

By all measures, John Paul DeJoria, the man behind mega-brands John Paul Mitchell Systems and Patron Tequila, is a self-made man. And though he would never say it, and would probably refrain from ever using the term to describe himself, he is perhaps the ultimate self-made man.

“Growing up in Echo Park, California, downtown L.A., at the age of two years old my dad left us – he was a deadbeat dad,” DeJoria told me. “So it’s just my mother, my brother, and I growing up. It was hard times. My mother ran into some medical issues where she couldn’t work. So, we ended up in a foster home in East L.A. from Monday through Friday. And we did that until I was about nine-years-old. We were with my mom on the weekends and there during the week.”

DeJoria’s time in the foster home served as the catalyst for his earliest entrepreneurial experience. An experience that would shape the rest of his life.

“On weekends we’d go to the Boy’s Club on Cincinnati Street in East L.A. For 25 cents, we could get all the wood we needed to build these really nice flower boxes and the club would give us a credit. This is the early 1950’s. My brother and I would make one, then go and walk down the street and talk to people and try sell our flower box.

“Our first sale was for 50 cents to a lady that was a waitress in a coffee shop. And it was on Wabash Avenue in East L.A., I’ll never forget it. So, we went back and paid our 25 cents credit. In those days, 5 cents would buy a soda pop. So 25 cents would buy you five soda pops; that was a lot of money in the early 50s. So what we did was, took the 25 cents profit we had made and paid for another flower box to be built. So when we sold the second flower box, that 50 cents was all ours. That was my first entrepreneurial adventure.

“Then after high school, I went into the Navy. And from the Navy, I went to work in a variety of jobs. One of the better jobs I had in my early 20s was selling encyclopedias door to door for Collier’s, no salary, commission only. If you didn’t sell, you made nothing. The average encyclopedia salesman lasted three days. Britannica had it made; they had appointments! We had no appointments! You would knock on doors and people would close them in your face. I lasted three years and it was a great experience for me.”

At 26, he got his first job in the beauty industry working for Redken Laboratories. Despite – and essentially because of — increasing sales revenue, he was fired two years later. Over the next four and a half years, the story repeated itself two more times; DeJoria was fired from companies that he made more profitable.

He was told he “wasn’t corporate enough,” the he wasn’t “one of us.” From people he respected and had ultimately built his life around. DeJoria had enough and decided to roll the dice by striking out on his own.

“In 1979 or 1980, a friend of mine who I’d known for 9 years named Paul Mitchell was a hairdresser in the beauty industry. He tried to come out with a product line and it just failed. A total, miserable failure, unfortunately. He knew nothing about business or putting a product line together. So I said, “Paul, let me try to help you out here as a friend.” Because I’m consulting so I’ve got some money coming in.

“As it turned out, Paul had no money, no business sense, and nobody was following through. The only reason it was going to work is I knew marketing, sales and how to get products made. So I said, “How about you and I start a company? You own 30%, I own 30% and we have to raise half a million dollars so we’ll give the person putting in the money 40% of the company.” Paul was getting to his last bucks. He said, “JP great – let’s do it.” So I organized everything and put it together. Took some of his old products and revamped them and came up with another new one.

“We’re ready to launch our new product line. And a friend of mine, found me an investor for half a million dollars. I quit everything I was doing.

“The relationship I was in wasn’t working out so I gave her all the money, the new car, the house because we had a child – everything. I took the used car – it was a nice used car though, OK? – and a few hundred bucks in my pocket and left, going down the hill to pick up the money that was supposed to be transferred into this bank account. No big deal. And when the money came in, I was going to check into, right there on Ventura Boulevard in North Hollywood, this little hotel because I’d be working all the time. And the money never came in!

“With nowhere else to go, I went to my mom’s house.  And I was too embarrassed, too much pride to say, “Mom, here’s what happened, I left my present situation, I don’t have any money, can I live in my old room?” Because I knew my room was open in the house. I was too proud.

But at this point in his life, now what? Armed only with a total of 12 purchase orders and checks, he convinced a distributor to become the “exclusive” distributor of Paul Mitchell for all of Southern California. How did he do that?

“From the day I pulled the trigger on the bottles, to the day I actually had product was two weeks. I now had two weeks left of living in my car until it was due. So I went up to Ventura Boulevard in Los Angeles, knocking door to door like I did with selling encyclopedias, salon to salon to salon, selling my products.

“I bought an answering machine for $49 and this girl I knew – a really wonderful English girl – was the voice on the machine. (In British accent) ‘Hello, this is John Paul Mitchell Systems. We’re really busy and we will call you back at the end of the day please leave us a message.’ To look like we were bigger, like it wasn’t just me and Paul.

“I sold 12 salons the product during this time, using that approach. I took the checks and the orders for those and I went to a big distributor. This is when I was still living in my car, mind you! And I said, ‘Would you like to be my distributor?’ I gave them a great presentation on why my little three products were going to change the world. Why one of our shampoos saves you money from buying two in terms of shampoo and conditioner – just a whole great story.

“And he said, ‘You’re a nice guy. But I’m a big distributor, I’ve got a lot of big lines. Why would I want to take on your line? No thank you.’ I said, ‘Well sir. Here’s why you should take it on.’ Remember, we were hard up! ‘For only $2,000 you can be the exclusive distributor for all of Southern California; L.A. County, Orange County, it’s all yours.’ He says, ‘No, no, no, no. You may never get anywhere with your line.’ I said, ‘I’ve got a second reason for you.’ I pulled out all the purchase orders and checks and put it in front of him.” I said, ‘These are your first twelve orders – I went out and sold them, here’s the checks. And I’ll stay here every day until your majority is sold.’ He laughed and said, “I’ve never seen anything like this before in my life – DONE. But you better be here to sell it every day.’ So I went out each day with a different salesman and I showed them how to sell the products. And the rest is history, as they say!”

From the humblest possible beginning, DeJoria made himself and created his future. Aside from becoming a successful businessman, that future also included two separate stints training the CIA in successful leadership practices, guest appearances on ABC’s Shark Tank, a private meeting with the Dalai Lama to exchange ideas on world peace, and charitable involvement in causes as varied as eco-friendly sustainability, and education and employment opportunities for the homeless.

His latest business venture, Aubio, a cold sore treatment gel based on the Awapuhi plant, boasts a success rate of over 90%. Why he would want to build another brand?

“Why do I want to build another billion-dollar thing? Because it helps out two thirds of the population of the United States – it’s affordable and it works. I’m high-profile; I can’t say stuff that’s not true or I get hung on it, alright? Every single person I’ve given it to, it has worked on. So I invested millions – plural, millions – to get this thing going. You can get it via Amazon or at any Target store. And it works. “

Speaking of things working out, when was the absolute moment he knew he was successful?