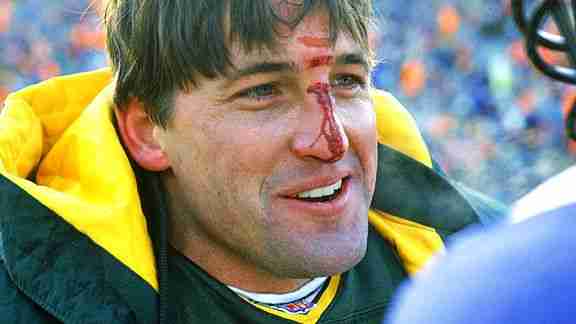 I’ve loved football and the NFL as long as I can remember.

My mom bought my younger brother and I jackets from the goodwill when I was about 5 and he was 3. Since that day, I’ve been a Cowboys fan, and my brother an Eagles fan.

I played football in high school, I went to numerous Nebraska Cornhusker games before I hit puberty. My favorite teams in college and NFL won 3 titles in the 90s when I was at my sports adoring prime. Huskers 3 National Championships, Cowboys 3 Super Bowls.

I love the game. I love watching football. Not just my team, but all the games. I still dedicate my Sundays to my favorite sport.

But something, somewhere, somehow changed…

It stopped being about the team.

Not sure when, but somewhere between the “No Name Defense” and people rooting for other players to score touchdowns on their favorite teams so they could collect their fantasy points, it stopped being about the team. Somewhere between “I’ll do whatever I can to help the team win.” and players calling each other out in front of the media before they bring it up to each other’s faces, it stopped being about the team.

Not everything should be breaking news.

Why should I give a shit about anyone’s ongoing custody battle or sore little finger? Especially someone I don’t know…and why should I care about it again in an hour when the same story comes around again? Every hour. On the hour. ESPN may be the biggest reason why I’m starting to hate football.

The analysts act like they’re celebrities now. They analyze a game that’s played by other people. They have no accountability for what they say. It’s a here today, gone tomorrow attitude of say whatever I want now, because no one will remember if I’m wrong. If I’m right, I’ll be sure to remind you though. Every hour. On the hour.

The personalities are out of control. Cases in point: Stephen A. Smith and Skip Bayless. Why do these douchebags still have jobs?

There is a great clip about Daniel Tosh’s feelings on ESPN and I couldn’t say it better myself. So I won’t.

It’s all about the Benjamins. No, not Kelvin Benjamin or Big Ben Roethlisberger…

The NFL has become increasingly more and more about business. Maybe I didn’t pay attention to it when I was younger. I think I might remember an interview or two when you’d hear a player say, “I understand, it’s a business too….”, but it seems like that is almost daily now. Like a publicly traded company, the NFL has to increase its profits every quarter or its investors get restless. So you gotta squeeze every last dollar you can.

Billion dollar stadiums have become the norm after JerryWorld. The Raiders and the Rams/Chargers just to name 2 are in the works right now.

Prior to that, the Vikings mega-stadium. Ziggy Wilf was convicted of fraud and settled for 84 million dollars. He then got the city of Minneapolis to pitch in $498 million of the total $1.024 billion price tag for the construction. Doesn’t matter if you even watch football or not…pay up. Then, when it’s done, inevitably you will pay quite a bit more for your tickets to see the game.

The NFL will has hired the highest power attorneys to avoid, or make, a deal on concussions. From all accounts, it’s a big Fuck You to the players. The players who make the game what it is and ended up with dementia and trauma and brain damage. The players that have pleaded to have concussions analyzed and studied. The players who shot themselves in the chest when they committed suicide so that the doctors could analyze their rotten brains. They will get some money.

But the players are afraid of the NFL’s high powered lawyers and are settling for way less than they deserve. The players that come after the settlement will get nothing to my understanding. Yet, with research out there that there is better equipment available to deal with concussions, possibly cutting them by half, the NFL doesn’t invest in these products. Why? They don’t want any lawsuits if the equipment doesn’t work. They already have a standard helmet and the settlement will protect that.

They’ve been PUSSIFYING the game for years.

Remember when every football player was tough and treated as such? I barely do. It’s almost to the point of two hand touch on quarterbacks. No hitting the head, neck, knees, calves, or ankles. Don’t “drive” the opponent to the ground. Don’t get pushed into someone on accident. Don’t lead with your head.

There have been multiple players with the mindset that “We know what we signed up for.” NFL players today make a MINIMUM of $420,000 to be on a 53 man roster as a rookie. Many of these players would not be able to do many other jobs in society. They get paid an exorbitant amount of money to catch a ball, tackle another man, out-muscle another guy, out-run another guy, knock someone down. Is it really that big of a surprise when injuries happen?

Take the biggest, strongest person you’ve ever seen. Now put him on a field with 105 other guys just as big and strong and fast. Make them fight each other and run at full speed and try and knock each other down. They know what they signed up for. That’s what the money is for. Stop making everything a penalty, taking the aggressiveness out of a game that is meant to be aggressive.

Kickoffs? Too many injuries. Let’s move the kickoff up so that the chance of a return is very slim. Not enough offense? Let’s make any contact by a defensive player a penalty. Play didn’t go your way? Excitedly ask the ref to throw a flag or try flopping. Maybe the NFL and NBA should merge…

Stop screwing with the game. Do you really need to make or change 5 new rules every year?

Even the in-game analysis has gotten ridiculous. If I wanted to know where the opposing nose guard went on his first date I would actually meet him and have a human interaction. There’s already a scroll on the bottom of the screen…do I really need Bob Costas to stoop as low as telling me how many fantasy points Peyton had this week?

How about a childish graphic showing two hamburgers and which has more toppings because both quarterbacks in the game have last names that end with -berger. How about a glimpse into the  in-booth tomfoolery between people who are supposed to be telling me what is happening during the game.

It’s got a lot to do with the media, but it seems to be getting chipped away from all sides. Interviews are about the most boring thing ever due to media training. No matter what the question is, the answer is most likely, “It was a team effort, gotta give credit to (opposing team), they played a great game and we came out on top. We’ll just take it one game at a time, and worry about that when it comes.”

I want football to be dumb. That’s what it is. It’s what I do when I want to do nothing and feel like staring at the ceiling might seem too crazy if a neighbor saw me through the window. It’s what’s on when I want to get drunk on a Sunday. It’s something I can put on as background noise.

Not everything has to be life and death. I want it dumb.

Omaha Nighthawks Retrospective – The Time Omaha Had A Pro Football...