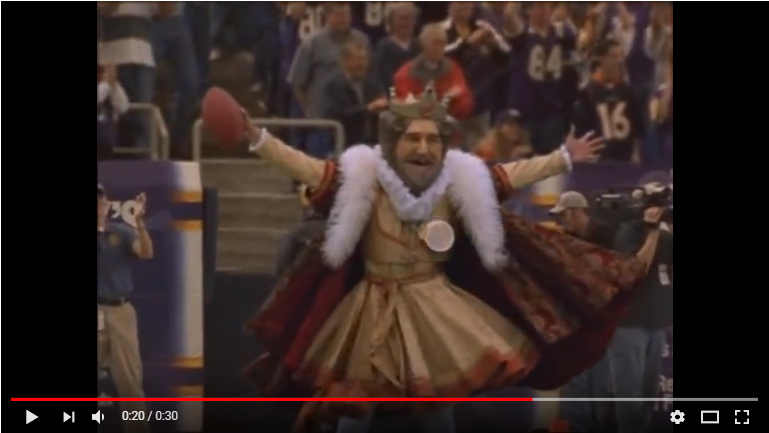 The Burger King in the NFL commercial campaign that ran in the early 2000s was pre-social media, so it had to be good for you to remember it after a Sunday jammed with eleventeen Coors Lights, the official beer of the NFL at the time (remember the Coors Light Twins commercial?).

It was incredible. It mixed classic NFL music with great plays in NFL history, with The King dubbed in as the playmaker. I can’t remember how many there were because its been 18+ years and I’ve been real busy, but here are the ones I could find:

Daunte Culpepper to The King with an assist from Randy Moss

I remember watching this game in my studio apartment in Chicago in real time, which was about the size of the phone/monitor you are viewing this on.

The Burger King As Steve Young Vs. The Vikings

You didn’t ask, but I think this is the most underrated run by a QB in NFL hiss. A 49-yard game winner by Steve Young on 3rd and inches with 1:58 left in the fourth quarter. Here is a link to that run, sans King.

There’s clearly a potential Elisabeth Hasselbeck “sack” joke in here which I’ll leave to you guys, but The King dominates the edge as a speed rusher, then produces a burger from his cape.

Deion Sanders Gets The King Treatment

I want to close out this article and say something like “Commercials just aren’t that good anymore,” but they probably are. This campaign was something I always remembered due to the classic music, old school NFL footage, and great editing – can you imagine how much time it took to edit these videos in 2003? Good Lord Almighty.

The NFL has certainly changed a lot since the Burger King in the NFL commercials first aired, but The Whopper, and The King, both remain firm.

Like old school NFL? Stick around for a while and read these: