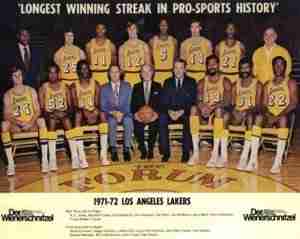 Today in 1972, the Lakers set an untouchable record. This is potentially the most overlooked record in all of sports.

To put the record into perspective, the Clippers 17 game winning streak that ended less than a week ago was little more than half as long.

On 1/7/72, the Lakers beat the Atlanta Hawks 134-90 for their 33rd win in a row. Two days later the streak was broken during a 120-104 loss to a Milwaukee Bucks team led by Kareem Abdul-Jabar and Oscar Robertson. If you’re going to have an epic streak broken, it may as well come against two of the best players in NBA histroy.

On their way to the best record in NBA history (until the 1995-96 Bulls eclipsed it), the team culminated the streak by winning the NBA title, the first for the franchise since the move to LA from Minnesota. The Lakers didn’t lose a game for over two months, going a combined 30-0 in November and December.

So is it the most impressive winning streak in American (because who knows what the hell is going on in Pakistan or Uganda; it doesn’t matter) professional sports history? Let’s compare it to the other major sports.

The MLB record for consecutive wins is 26 by the then baseball NY Giants. In the NFL, the New England Patriots won 21 in a row between 2003 and 2004. In the NHL, the Pittsburgh Penguins set the mark with 17 straight in 1993.

NBA wise, you may be surprised to know that the second longest winning streak is 22 held by the Houston Rockets in 2007-08. Nobody expected anything out of the Rockets that year and they somehow went off before showing “they are who we thought they were” and losing in the first round of the playoffs.

Do you think the Lakers record of 33 consecutive wins will ever be broken?