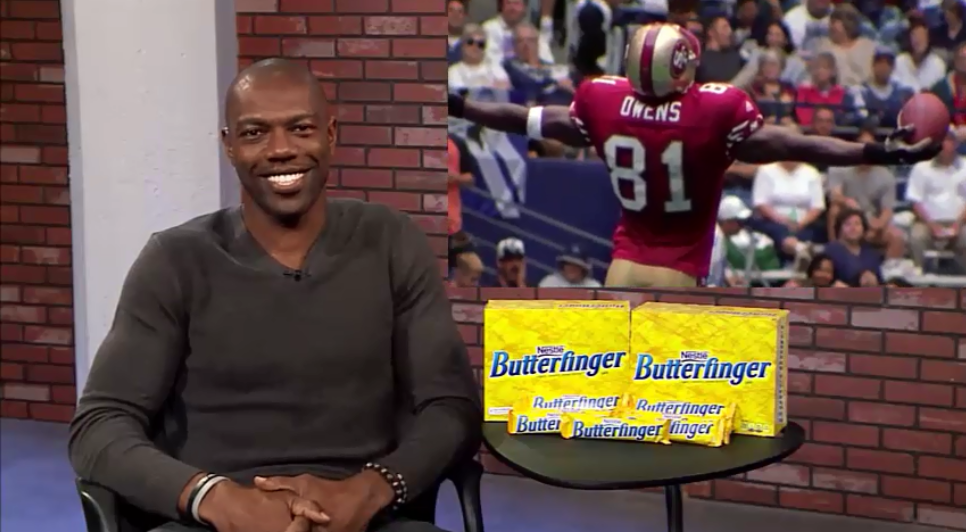 “Get your popcorn ready!” In this interview with the latest member of the Pro Football Hall of Fame Terrell Owens, I covered all of the topics that defined his football career. And had a ton of fun!

The one question I wish I would’ve asked in hindsight is, did all the hijinks take away or at least obscure the fact that he is maybe the best, most physically dominant wide receiver ever? In assembling all the highlights for the video below, I realized that there were so many moments of greatness that I had forgotten about. It’s kind of a shame.

What was your favorite touchdown celebration; the mouthful of popcorn in Dallas, the Sharpie he pulled out of his sock, the Dallas star celebration vs. George Teague and Emmitt Smith as a member of the 49ers, the pompom shake in San Francisco, or the mocking of Ray Lewis during your time with the Philadelphia Eagles?

Terrell Owens: Man I forgot about all of those! My favorite was either the popcorn or the pom poms. I think those were two that were really kind of spur of the moment and impromptu. Sometimes, when you get in the moment, you have the best celebrations. And there are those I kind of had in mind to do, like the Sharpie and going to the Dallas star. It’s why I’m here.

Was the Dallas star celebration the most powerful feeling you have ever felt in your life?

Terrell Owens: I think so. I wasn’t doing it to taunt anybody. But obviously when you are on the losing end of that a lot of people are going to misinterpret it. As I look back on it, that was a significant moment in my career. I wasn’t a moment that defined me I don’t feel.

Did you ever use HGH or performance enhancing drugs?

Terrell Owens: No man. What you see is a product of pure hardwork and dedication in the weight room.

Who is a better player you or Hall of Fame contemporary Randy Moss?

Terrell Owens: I’m definitely going to go with myself. I did it across the board, I did a little bit of everything. I did the little things, I did the intangibles. I blocked downfield, I played hard for four quarters, and with some people’s assessment of his play, he didn’t play 100% of the time.

Your broken leg in the Super Bowl. You had the greatest performance a WR has ever had 7 weeks after breaking your leg. How is that even possible?

Terrell Owens: Well number one, I am a very spiritual, religious type of person. I put my faith in God. First and foremost demonstrate to people if you put your mind to anything, there really is nothing impossible when you have the big guy up above in your corner. The way I was raised is that with fault all things are possible. Considering the injuries I had, they had doctors across the country saying I wouldn’t even be walking let alone running around in a professional football game. For me it was one of those moments I enjoyed. On the biggest stage in the biggest game in my career, I wasn’t going to let a few broken bones and ligaments stop me.

Would you trade in your 15-year NFL career and all the personal accolades for a 10-year career and a Super Bowl win?

Terrell Owens: No, absolutely not. With the way that my career started, how it started, where it started, considering that I never thought I would play beyond the collegiate level…for me I’m a testament, I’m an inspiration, and I’m going to use this platform that I have with my 15-year career to motivate and inspire kids. Kids that were like me that didn’t have a lot of confidence in themselves. I had the “three d’s” – desire, dedication, and discipline which I used to get where I am and that’s who I am; the man you know as “T.O.”