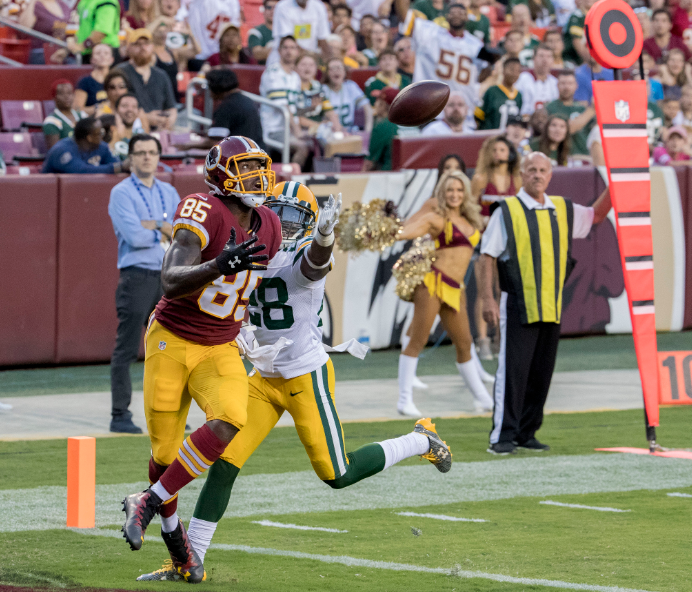 When you’re good at multiple things like Vernon Davis, it’s hard for people to define you.

And when people can’t define you, or worse, fear that you’re more skilled than they are, aspersions are cast.

Every NFL fan has an opinion on Vernon Davis.

Just the mention of his name will elicit either an eye roll and terse statement about unrealized potential, or, acknowledgment of his success on the field as one of the NFL’s best tight ends for almost a decade.

And his unique interests, including starting a full-service fine arts and interior design company, off of it.

A Studio Art major at the University of Maryland, Davis’ performance at the 2006 NFL Combine — including setting positional records in the 40-yard dash and broad jump — set the expectations extremely high.

Davis was drafted in 2006 by the San Francisco 49ers with the #6 pick, the fourth highest a tight end has ever been drafted.

But he didn’t set the world on fire right away and it took one of the most famous coaching meltdowns in history, Mike Singletary’s “I want winners!” rant, to get the most out of him.

After accumulating only nine touchdowns in his first three seasons, Davis scored an NFL-leading 13 in 2009, and secured his first Pro Bowl selection.

After a Super Bowl appearance with the 49ers in 2012, another Pro Bowl selection in 2013, and signing the then-most lucrative contract for a tight end in NFL history, Davis established himself as one of the best tight ends in the league and finally lived up to the potentially that had seemingly dogged him.

We asked Vernon about his willingness to share his emotions and artistic side, the Singletary incident as an agent for change in his life, and how to successfully realize your potential in any endeavor.

Talk about your video as part of the Old Spice Football Ball Sports Club.

Vernon Davis – When Old Spice came to me with the Bearglove scent campaign, it started off with a video shoot at my house. I’m sure you saw the video, with the “bear gloves,” right? Get it, Paul??

Oh, I got it alright VD! I saw your house, then the snow outside and thought, “The place is so empty, I bet this is his new place in Denver after getting traded to the Broncos!”

Vernon Davis – I know, right? There’s a lot of room because I just moved in! I’m working with Old Spice for the Football Ball Sports Club. As the official deodorant and body wash of the NFL, Old Spice is cleaning up with some of the players to teach kids to have self-confidence, and  it starts with smelling your very best.

One thing that I’ve always found interesting about you is that you’ve never shied away from expressing your creative side, while physically being the absolute definition of the alpha male. How have you been able to balance both?

You have to do what your heart tells you to do and don’t look back. Just do it, because there is always room to grow, in everything. There’s no limit to what the human mind can do, or that the human body can do; there really is no limit. I’s all on YOU.

It’s all predicated on how much time you put in, what you’re going to do to get there, and that’s what it’s about.

Was the incident with 49ers head coach Mike Singletary, where he sent you back to the locker room in the middle of a game for being selfish, a legitimate transformational event in your life? Or, was it just in the football sense? You started producing on the field at your highest level immediately after and for the next several seasons.

Vernon Davis – It was very transformational for my whole life. I say that because Coach Singletary gave me insight on some of the things that I needed to do to get better as a football player and as a person. And those things stuck with me and it resonated with me in so many different ways.

And to this day, I’ll never forget the moments we shared when we were in San Francisco. I still think about them and I really appreciate the things he did, even though it was tough, it was tough love, but it helped me grow and molded me into the man that I am today.

Do you feel like people have ever gotten to know the real Vernon Davis? Do they have a better idea now compared to a couple of years ago?

Vernon Davis – Kinda sorta. It takes time for individuals to really reach their potential and reach the goals that they set for themselves and I understand that.

It just takes time; everything in life is predicated on time. You’ve got to be in the right place at the right time and that’s how I look at it.

Describe your game-winning touchdown catch against the Saints in the 2011 playoffs to send the 49ers to the NFC Championship game. Where did the emotion and openness you showed after the touchdown come from?

And I saw the opportunity and made it, and when I cried, those were tears of joy. It was tears from all the hard work that I put in, all the time that I put in at the facility, nights of hard work, even back to high school and college, all that time that I put in, and I always wanted to make that shot and I finally got the chance to do it, on the big stage.

All that was, was the timing, being in the right place at the right time, and I just had to shed tears because it was just so overwhelming to me, that I just had to let it all out.

Beyond offering guys manly scents like Timber, Swagger and Bearglove, Old Spice, “The Greatest Smell in the NFL,” is providing NFL fans exclusive access to the Old Spice Football Ball Sports Club featuring a collection of never-before-seen, football-themed inventions being supplied to some of the league’s top players. NFL fans can follow the action all season long at Old Spice’s Tumblr page.