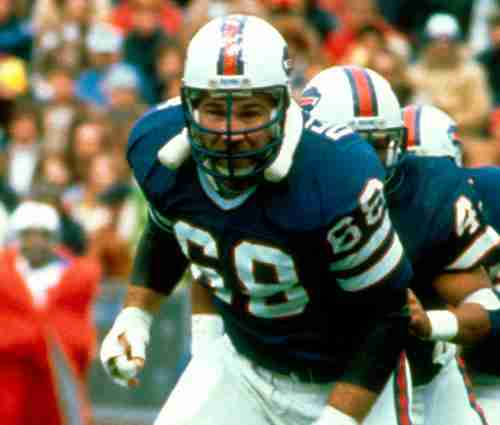 History has not been kind to upstart American football leagues. No matter how well laid the plans, it seems as though any acronym that doesn’t contain the letters “NFL” is doomed to failure.

On Saturday afternoon while most of us are watching the Senior Bowl, a new league, the All American Football League, will hold its inaugural league Draft. If you’re like me after considering that for a moment, images of Vince McMahon’s horrendously planned, preposterously hyped XFL probably come to mind.

But this league is different, says NFL Hall of Fame guard Joe DeLamielleure one of the leagues spokesmen. If it wasn’t, the nine time All Pro performer and 2003 Hall of Fame inductee wouldn’t have associated himself with it.

“This isn’t the XFL or the USFL,” said DeLamielleure. “First off, were not competing with the NFL in any way, shape or form. The other thing is we’re paying the players between $50,000 and $100,000 to play for ten weeks in this league. None of those other leagues paid that amount of money which shows how serious we are.”

So how will they do it? Initially, six cities were selected in pre-existing college football “hotbed” type areas to attract a built in fan base. Available big name players were then divvied up by the region where they played collegiately or are the most well known.

Those players were then tagged as “Protected Players” and cannot be drafted in the league’s Draft.  “Protected Players” are those who played college football in that particular franchise’s region, and have been pre-selected by each team as a sort of core group to build the rest of the team around.

These “Protected Players” are essentially the heart of the league. After the Draft, it’s a 10 week season with a championship game the week before the 4th of July pitting the top two teams against each other.

“A major strength is the name recognition and the talent,” said DeLamielleure.

“There is a lot of talent out there that we have access to that there just isn’t room for in the NFL. Eric Crouch, Chris Leak, Tee Martin, Woody Danzler, Shane Mathews is a coach. I could tell you the names of backup QBs in the NFL and you wouldn’t know them. But every guy I just named off, you know that guy immediately. That’s another thing this league offers that those other leagues didn’t.”

Another cool feature about the AAFL that adds even more credibility and tugs at fans college alliances is that the games will be played in recognizable college stadiums.

This fact adds to the appeal of a “college based” pro league which pits former collegiate rivals against each other and rekindles the flame of a long dead SEC or Big Ten rivalry that seemingly died when their college eligibility expired.

As one newspaper put it, “Think Florida vs. Alabama or Tennessee vs. Georgia in May.”

“Originally, the concept came from Marcus Katz (the CEO of the league) when he was at the University of Georgia,” said DeLamielleure.

“There were a couple of particular Bulldog players who he really enjoyed watching but realized they weren’t quite good enough to make it to the NFL. And he thought it was too bad he’d never be able to see them play again. Then he thought it would be cool to play football in the spring and carry over some of that enthusiasm that college football is known for.”

Another thing the AAFL has over the XFL, for example, is a noticeable lack of gimmicks.

There are no one on one sprints between two players prior to kick off to see who possesses the ball first.

“All the rules are exactly the same as college. For example, one foot down constitutes a legit catch where it’s two in the NFL”, said DeLamielleure. “We also have a partnership with the NFL and NFL officials. The NFL wants their officials to get more game time so they’ll get more practice with us. The NFL will provide officiating crews for all thirty AAFL regular season games, two playoff games and one championship game.”

Speaking of lack of gimmicks the AAFL requires a college degree for anyone who plays in the league, further polishing the leagues feel good, “Go Team” image.

“The main reason we instituted the rule requiring a degree to play in the league is because we thought it would create a higher quality league. Anywhere you look in society the more educated you are, the better your opportunities and current situation. For example, the Patriots have the highest graduation rate of any team in the NFL so there is a connection between education and performance, just like with anything else.”

And what kind of game can we expect?

“This league is going to be wide open and most teams will run the spread offense. Nobody wants to see a 6-3 game. I know the Florida team under Shane Mathews is going to run the ‘Fun-n-Gun’ that Spurrier ran. John Jenkins, the former Houston Cougars head coach who had guys like David Klingler and Andre Ware, he’s going to implement the same type of offense with the Houston team.”

So back to my original point; why should YOU care?

Why give this league a second thought and follow this link (http://www.allamericanfootballleague.com/AAFLDraftInformation.php) to watch the Draft live? Because we’re talking about football in April here people!

What else do you have going on besides Easter? Not only is it football in April, but an apparently high level of football based on the names of players involved.

And who can seriously tolerate the Arena League? It just isn’t natural.

“This ship has never sailed,” concluded DeLamielleure. A league that’s not competing against NFL, guys are getting paid well and they have a built in following because people are going to know the players. Tell me another league that ever started out like that?”

Check out the league’s homepage at:  www.allamericanfootballleague.com