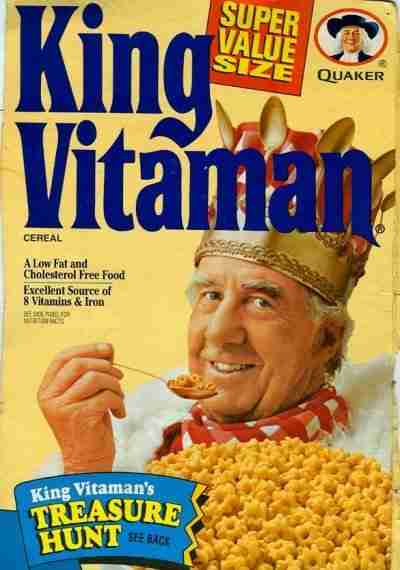 In the days of yore, a gracious King ruled the land with no greater concern than the  nutrition of his people. His rule afforded the people a nutritious, multi-vitamin laden cereal and they, in turn, overlooked his penchant for scarves.

The sweet monarchy of taste appeased the citizens and they cried, “Alas, the King is bold, the King is brash! We love his sweet flavored corn chunks slithering from our ass!  Long live the King!”

But, a nefarious plan was a foot as the King’s once noble Jester, Riboflavin, held  contempt for the King of Nutrition.

(In heavy British accent) “I hate that damn King! I, Riboflavin, am tired of occupying the second tier of nutritional value! You can’t have a healthy diet without Riboflavin!!”

While the King had always presided over his kingdom with a steady hand, some began to speculate that the lack of a “Queen Vitamin” alluded to his love for a Vitamin that isn’t included in the food pyramid; Man Sauce.

Riboflavin seized and spread this malicious rumor to the citizens of New Vitamin and soon the citizens were talking.

“The King is good, the King is great, but man on man ass sex is something we all hate! This isn’t Rome, this isn’t Spain, a dick in the ass causes tremendous pain! Down with the King!” Quietly adding, “If the guy would’ve just blown him that would’ve been cool.”

King Vitamin went to tremendous lengths to save face and regain the love of the people.

In an attempt to relate to the people and their concerns the King infiltrated his own kingdom by forming a rock band called “King Diamond”, cleverly using a pseudonym to mask his true identity, and went on a 30 fiefdom tour. Surf and servants agreed; this King rocked!

“This King rocks hard and fast much unlike our King of Ass! Old man’s sphincter’s young mans balls, our King courts men, one and all!”

Even though he toured the world from 1983 to present, and sold 15 million records in the process, King Vitamin was unable to shake the false stigma of gayness that had unceasingly assailed him.

And Riboflavin was pleased.

“Ha ha! The nutritional pyramid is mine!”

But nothing could compensate for the King’s skill at playing the skin flute. “Drat,” he thought. “I should’ve learned to play the bass.”