This the Best Frank Thomas interview EVER.

No production, no graphics. Me in my mac miller shirt in my home office with a pull up bar and a life-size picture of myself in the background. Just like this interview with White Sox manager Tony LaRussa.

Two dudes talking baseball and Tom Selleck’s mustache – one of them just happens to be MLB hall of famer Frank Thomas.

Frank and I kept it light and talked Mr. Baseball, the best ball he ever CRUSHED, his favorite pitcher to RAKE DINGERS off of, and what he calls the baseball stadium in Chicago – Comisky, The Cell, or Guaranteed Rate Field.

Paul Eide: I’m stoked to talk to you today Frank. I just want to talk about your career a little bit and then talk about nearsightedness versus farsightedness – where should we start?

Frank Thomas: I think we should start with Varilux.

Paul Eide: Let’s do it

Frank Thomas: They changed my life; it is the world progressive lens in the world. So as for most of us around 40, we develop presophobia which is a condition. And to be honest you know i had 20/10 vision my whole baseball career. And then around 45 to 47, you know, you started stretching out those menus, those text messages and all the apps, it all became hard to read. I thought something was wrong with me so I’d reach out to my eye doctor and he was laughing at me he’s like “welcome to being old.”

That condition is real and uh you know you need to do something about it. so for me i didn’t want to wear glasses for so long trying to be cool or whatever. but now I’ve realized having these lenses and these glasses have changed me for the best because I’m on TV now looking at custom screens and cameras and the glare and everything else and it affects your eyes as you get older. So I’m happy to be with Varilux and we’re moving forward.

Make sure you check us out at essilorusa.com.  You need to see your eye care provider though so you can get these lenses fantastic

Paul Eide: So what’s it called when I’m holding the pill bottle or the menu as far as my arm can stretch – is that nearsighted or farsighted?

Frank Thomas: Whoa Paul, I’m not i care provider now. I can’t diagnose eye problems, you gotta check with your doctor with that one.

Paul Eide: Big Frank it’s been 30 years and after all this time do you feel bad about how it went down between you and jack Elliot during your time with the Yankees in 1992 as Ricky Davis…?

Frank Thomas: yeah Ricky Davis was a heck of a young ball player!

Paul Eide: Man he could do it all. five tools! 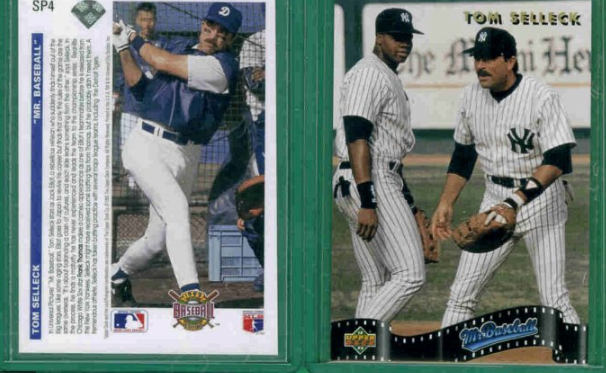 Frank Thomas: That was a heck of a movie, it was a heck of an experience. I got to spend a week and a half in LA filming a major motion picture with Tom Selleck. And he nailed it he worked his butt off.

He was in a cage non-stop because he told me he did not want to disrespect you the major league ball players acting out that part in that role. So he did a hell of a job, he put in the work man. And that’s why he’s been one of the world’s greatest actors for a very long time.

Paul Eide: Is he taller than you?

Frank Thomas: He’s a big boy. He’s six four we’re right close eyed eye. But yeah he’s a tall guy; he fit the part. He had the swagger, he had everything down. He did a lot of homework becoming a major league baseball player.

Paul Eide: Was the mustache more impressive or less impressive in person?

Frank Thomas: You know, what it was more impressive.

Paul Eide: Well I I’m sure you didn’t get on this call to talk about Tom Selleck’s mustache but we sure can.

Frank Thomas: He is a class act man i enjoyed my time with him.

Paul Eide: Awesome. Do you remember the best ball you’ve hit in your whole life? Like you know that feeling of just stroking one – do you remember it?

Frank Thomas: Yes I would say uh it was against Johan Santana when he was with Minnesota Twins. He came inside, a fastball, one night and i hit it pretty much really close to the top in our ballpark in Chicago and left center field but it almost reached the concourse. It was a big home run; it was a game-winning home run actually.

Paul Eide: When you’re just sitting in your living room watching the news they’re just kind of over there like you know like “oh there’s those two AL MVP trophies.”

Frank Thomas: Yeah I remember this all the time. You know i look at i look at all of my trophy case and all the accolades and awards and I’m proud of it because i put in a lot of work. Nobody gave me nothing they always thought I was a football player playing baseball. And to achieve the way I did it was something special mentally and physically and I’m really proud of my career

Paul Eide: Talk about that for a second – do you ever think about how your life would be different if you hadn’t gotten hurt playing football early in your career at auburn?

Frank Thomas: No. I really wanted to achieve in baseball. We won back-to-back state championship in high school and i knew i could play baseball. But down South everybody looked at me as a football player. So i had to prove my worth. you know i went to Auburn to play college football and uh coach Pat Dye gave me a chance to walk onto the baseball team. But he said I had to earn my way in football first. And I did so he gave me the chance to walk on and rest his history.

Paul Eide: What is the best pre-social media 80s to 90s real world interaction story that you Bo Jackson, and Charles Barkley had?

Frank Thomas: Well you know it’s one of those things that uh we didn’t have the cell phones like we do now. you don’t have the social media but uh just to talk amano amano and uh the to fill that testosterone in the room with three of us you know great players a few different sports. and uh very proud of the university because uh you know we put out a hell of a players. and you look at cam newton in the mix now we got one hell of a mountain Rushmore at auburn university.

Paul Eide: You three guys one room all the testosterone, all the joking around i just love it. are you guys everybody’s been told you’re one of the best they’ve ever seen you know what i mean. as well yes oh it just goes all night.

Frank Thomas: Yes, every now and then. But Charles will tell you he’s the most famous auburn tiger ever you know there’s only one chuck he’s saying he’s one pose two and um three and he’s at cam’s four he said Cam didn’t go to Auburn long enough so he’s number four.

Paul Eide: That’s fair. What was your favorite stadium to crush dingers in?

Frank Thomas: I would say Fenway. Really, all you had to do was get the ball up. once you got it up it went a long way out of that on that short ballpark in left field.

Paul Eide: In your days with the White Sox what was the big piece of metal that you’d swing in the on deck circle

Frank Thomas: My rebar! I’m in Sarasota, Florida and right across the street, there was a house been built right next to our spring training site. I just ventured over there one day because I was I was either earlier or later than everyone else. So i walked over and saw these these bars over there and I said, “what the hell is that?” I picked it up it was heavy and it looked like a long bat. So i just picked it up, and they had like quite a few over there, and I just I really helped myself to one and next thing you know i’m swinging the old deck circle.

Frank Thomas: Yeah but it made the bat feel like a toothpick. All I did was put tape around it took it home back and had it in the on deck circle because I never liked the way, the ends like, uh you know the weights in the top; the round weights they put on the top of the bat it doesn’t make me feel good going to the plate it’s like top heavy you know what I’m saying.

Frank Thomas: well it was right across from the clubhouse okay it was basically part of the clubhouse. so i went over and saw it that was awesome. yeah that’s the bigger pieces but i got one i could handle take it up put it in the bag and old deck circle. the next day a lot of guys tried to swing it too

Paul Eide: all right rapid fire on you frank. Favorite pitcher to rake off of?

Frank Thomas: ugh i mean i never had a favorite one to rake off of i had a lot of success against Mike Mussina and Randy Johnson so two two hall of fame guys that uh i did well against.

Frank Thomas: i would say i had a few but the one who made me laugh the most was tim Raines.

Paul Eide: In casual conversation do you refer to Comisky, as Comisky, the Cell or Guaranteed Rate Field?

Paul Eide: perfect. who’s the biggest name you have a text thread going with on your phone right now

Frank Thomas: not really just it it it i wanted to be better because the statue is more early 90s and my look kind of evolved down the road there so i wish that i kind of took the 2000 frank thomas look with the longer pants than that old school look.

Frank Thomas: left-handed never did much of that but i could hit left-handed. it was kind of weird i could turn around and still hit the baseball but it was
just awkward i could hit it 350.

Paul Eide: final question has anyone ever had the stones to call you the big skirt to your face?

Frank Thomas: all kind of fans you know that’s just they got to get in your psyche somehow.

Paul Eide: did anybody ever get in your psyche?

Frank Thomas: no but they tried

Paul Eide: Frank Thomas the man the myth the legend. Loved speaking to you sir thanks for everything!