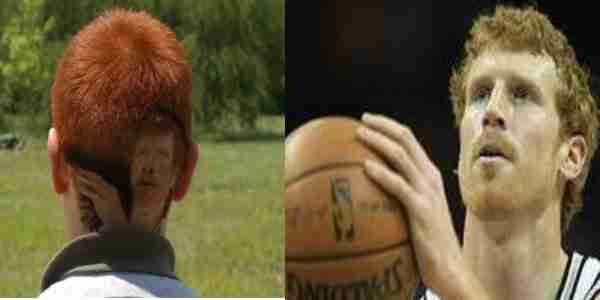 Why would you get an image of the Spurs 6-10 three point shooting role player cut into the side of your dome? This kid must’ve been abused.

But, if you were going to, at least it was executed perfectly by the barber, for a cool $75 bones.

But think how weird it would be to be behind that kid in line somewhere, especially outside of Texas- it would just be creepy.

The cut itself though looks so good that the 12-year old could walk up backwards to the register at any store and easily, casually, purchase a pack of cigarettes as Matt Bonner.

Actually, if you squint your eyes and look at the image of Matt Bonner, it actually begins to look a lot more like artist Vincent Van Gogh. Or Chuck Norris.

But what cemented the haircut into legend was the fact that the 12-year old recipient of the haircut was actually suspended from school for being a “distraction.”

That is when Matt Bonner had enough and decided to intercede.

Bonner offered the boy (and fellow redhead) playoff tickets for him and his family, as well as several pieces of autographed Spurs memorabilia.

Via Twitter, Bonner also offered a showing of solidarity for his young fan: “Keep working on your game and maybe I’ll shave you into the back of my head.”

Shaving notable celebrities into a person’s head has really evolved in recent years, beginning with this barber who cut a startling likeness of the rapper Biggie Smalls into a patrons head.

From there, the trend continued, culminating recently with Bonner and even his Spurs teammate Tony Parker.

Kudos to Matt Bonner for having the kids back. At least one adult involved handled the situation rationally.
Related NBA:

Why NBA Super Teams are a Three Point Play for the...