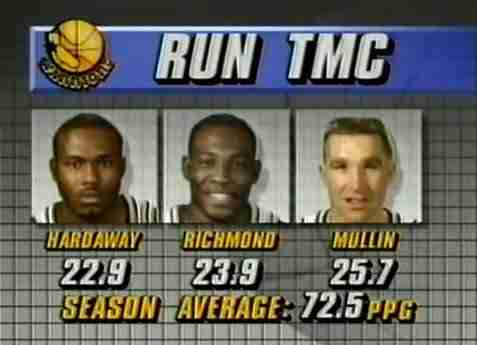 Of those four games, NONE of them have taken place in the last 25 years! Take that, youngsters!

My favorite of all-time featured RUN TMC vs. the Nuggets.

On November 2nd, 1990 when the Golden State Warriors registered a 162-158 win over the Denver Nuggets at McNichols Arena. The Warriors and Nuggets combined to make 120 baskets, of which only six were three pointers. 320 points set an NBA record for the most points scored by two teams in a non-overtime game.

Orlando Woolridge (RIP) poured in 37 for the Nuggets, while teammate and silky smooth Walter Davis notched a cool 33.

22 players played in the game and 21 of them scored. The only player who played, yet didn’t score in the highest scoring game in NBA history, was Anthony Cook.

It was the first home game of the 1990-1991 season for the Denver Nuggets, and it was an introduction to first year head coach Paul Westhead. Nuggets fans, and the entire NBA had never seen anything like Westhead’s offensive approach. And outside retro basketball video games, you probably won’t ever see anything like it again.

Denver averaged a league-best 119.9 points per game in 1990-91, it also surrendered an NBA record 130.8 points per game, including 107 points in a single half to the Phoenix Suns, which remains an NBA record. It was a run and gun style that used up to 10 players as part of a regular rotation.

Golden State, led by Don Nelson, was no offensive slouch either. Lauded as a team that didn’t play defense, the Warriors finished second (to the Nuggets) that season in points per game (116.6).

What ensued was potentially the most entertaining game in NBA history. The pace of the game is ridiculous, even in the highlights. Check it out:

The highest-scoring regular season game is the triple-overtime game between the Detroit Pistons and the Denver Nuggets on December 13, 1983. The two teams combined to score 370 points, with the Pistons defeating the Nuggets 186-184.

The highest-scoring playoff game is the double-overtime game between the Portland Trail Blazers and the Phoenix Suns on May 11, 1992. The two teams combined to score 304 points, with the Trail Blazers defeating the Suns 153-151. The Suns’ Kevin Johnson scored a game-high 35 points, with 12 other players also scoring in double figures.

The highest-scoring playoff game in regulation occurred when the San Antonio Spurs defeated the Denver Nuggets with a score of 152-133 for a combined score of 285 points on April 26, 1983. In that game, the Spurs’ George Gervin scored a game-high 42 points.