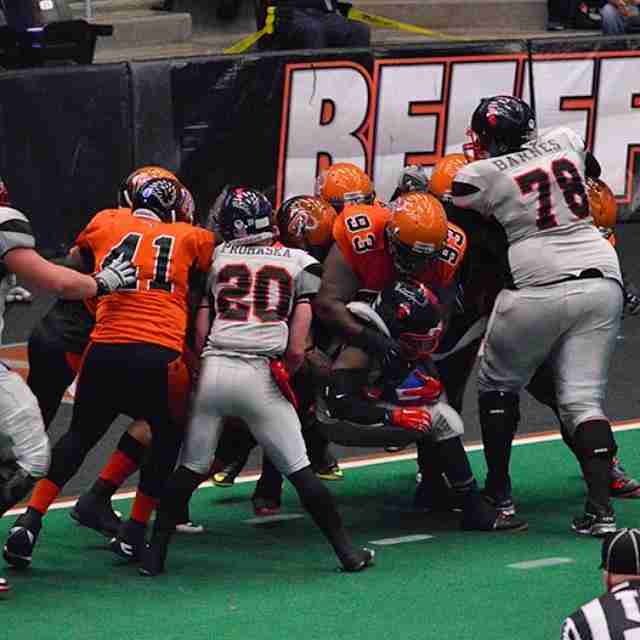 But what really separates him is his agility and quickness. Check out this highlight of him corralling Dodge City Law quarterback Joshua Floyd.

Describe what it’s like to be a 6-3, 325 pound human being – what’s the best part of it, what’s the worst part? Everyone assumes it’s awesome all the time.

Where are you from originally and how did you end up with the Beef?

I’m originally from Montgomery, Alabama, born and raised. I graduated high school in 2012, I’m 22 years old. I attended Dodge City Community College where I met my beautiful wife, Sofia McWilliams and my wonderful step kids. We started dating, got serious, then we moved to Larned, Kansas. I got in touch with Cory Ross and he asked could I come down to showcase my talents and I told Coach Ross I’d love to! I really appreciate the opportunity to play for the Beef and be in Omaha – it is truly a blessing.

What has the biggest surprise for you playing indoor football compared to outdoor? Is it the speed? The smaller field? What’s the biggest challenge?

I treat playing indoor football as if I’m playing outside. The speed of the game is faster, it’s a shorter field, but I think it gives you a great opportunity to play at the next level. We’ve got the opportunity of to be seen by scouts in the NFL, CFL, or AFL, you name it. It’s just an all-around good experience.

What’s the best feeling for you on the football field? Is it stuffing a run, a sack, dominating an offensive lineman?

The best feeling for me is all of the above – I’m in love with the game. I give thanks to the good Lord above before every game. I am absolutely blessed to be in this league and part of the Beef organization.

Chicago Bears Receivers Prior To Brandon Marshall Were Sad AF

Sammy Watkins Interview: Growing Up A Bills fan To Playing For...