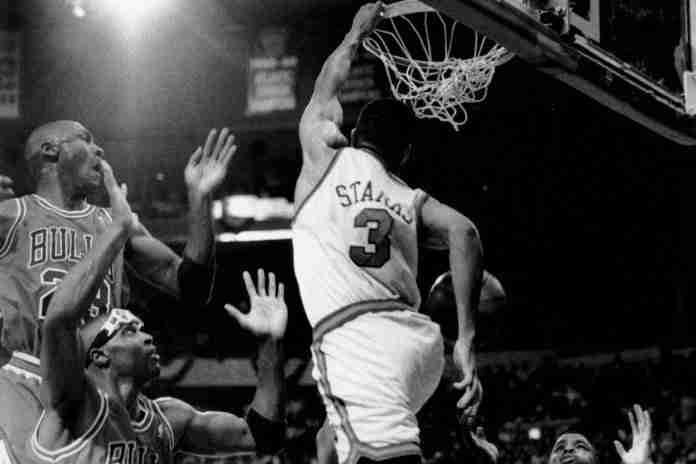 I checked the date, I double checked, I triple checked but as of today, John Starks is 53 years old. Which is amazing to me because he still looks like he could play. But on a much more selfish note, as a guy who grew up watching Starks work his Svengali like magic, if John Starks is 53, then I am no spring chicken either!

John Starks was the epitome of the old saying “The instigator never gets caught.” Everything about him was annoying to opposing teams. His face. The way he ran up and down the court. His voice. The way his mouth never looked like it was completely closed. He really was the ultimate instigator on a team of large, physical, angry men. When Pat Riley got hired as the head coach of the Knicks prior to the 1991-92 season he changed their entire style of play.

Seeing how well it had worked for the Detroit Pistons, Riley’s Knicks decided to play like the “Bad Boy” teams of the late 80’s and early 90’s, Starks filled the role of Dennis Rodman for his team. And it worked.

The physical, defensive style of play was more like hockey but it made a Knicks team that was limited talent wise, one of the best teams in the Eastern Conference thanks to their disruptive antics. A season after finishing four games under .500 the Knicks won 12 more games the following year. Then an additional nine the next year. Then the following year lost in the NBA Finals to the Houston Rockets. The merger of John Starks and Riley keyed it all.

In key moments throughout his entire career, whenever the Knicks needed a spark, Starks was the man. And as soon as shit got thick Starks would generally recede from view and let Charles Oakley handle it, because if Starks was Tie Domi, Oakley was Bob Probert, the “enforcer” who could finish the job, the goon nobody wanted to mess with.

Occasionally Pat Ewing would get involved but largely the team did a great job of protecting him, the “star” and franchise player. Anthony Mason, and even Charles Smith, had Starks’ back and you could see the Knicks as a team genuinely get a rise out of Starks and the energy of the team would change. And Starks would just slither away once the ruckus was created and never be assigned any blame.

Though his role was that of an instigator, Starks was a very good guard and his career as a journeyman prior to his NYK days is truly inspirational. He averaged double figures for nine straight seasons, topping out at 19.0 ppg in 1993-94. He was the first player to make 200+ three pointers in a season. He was the Sixth Man of the Year.

But for as much as being remembered as the ultimate instigator, Starks dunk in the 1993 playoffs is one of the NBA’s all-time indelible images. “The Dunk” was vintage Starks, playing above his head, doing something no one thought he could do. “The Dunk” was unbelievable. Almost as unbelievable as thinking Johns Starks is 48 years old.