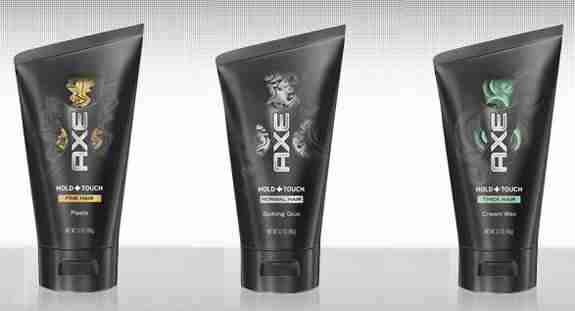 When I received the new AXE Hold + Touch hair styling products, I was skeptical. Too many times in the past I had fallen prey to styling products that you could squeeze out of a tube that simply didn’t work.

More often than not, these products had the consistency and holding power of Dep or LA Looks (for all you children of the 80s and 90s), and no matter how many layers you glopped on, the product wouldn’t hold — it would merely coat your hair, mat it down and make it look sweaty, like Colin Farrell’s portrayal of Don Johnson in Miami Vice. Or, Don Cheadle in any movie he has ever been in. And guess what guys? Chicks hate the sweaty, Vaseline hair look.

Anyway, it was impossible to style or spike your hair, or give it the appearance of body or texture with those aforementioned products. And generally, those products came in squeezable tubes — just like the AXE samples that were staring up at me from a recently opened UPS delivery parcel. “Yawn,” I thought.

After a Sunday morning workout in preparation of doing nothing but watching NFL football and drinking all day, I took a shower and decided to try the AXE Hold + Touch Paste for Fine Hair first of the three samples.

My hair is somewhere between thick and fine so I chose the Paste for Fine Hair first because, generally, pastes are pretty strong. But based on the texture of the Fine Hair product, I squeezed an excessive amount into my hands, rubbed them together and began to style my hair. As I applied it, I looked in the mirror and thought, “Yawn, how predictable; another inferior hair gel.”

But on the car ride from my house to a sports bar to meet my friends, something happened — not only was my hair frozen in the exact same position it was when I left my bathroom, but it had more body and texture and looked fuller than ever. It was actually the first thing my friends commented on when I seated myself at the table: “Did Paulie get some new hair products or something? Nice hair.”

Around three hours later, just prior to the beginning of the afternoon games, I used the restroom. While in the john, I casually glanced at my hair in the mirror and quickly realized it looked impeccable — just like my hair role model, Scott Disick, always does. I confidently strode back to the bar and ordered a two-dollar Miller Lite and felt pleased with myself.

At the conclusion of the afternoon games, I headed out of the bar and over to my special lady’s place. This would be the real test of how good my hair looked and felt. The first thing she said when she saw me was, “Did you get a new hairstyle or something?” No, my dear, I just got better taste. And a better product.

After lying in a reclined position with her on the couch, my hair hit the only snag of the day. My special lady was running her fingers through my hair when she hit a rough patch and exclaimed, “I don’t know about your new hair gel, Paul. It makes your hair a little stiff.” Her point was valid — my hair was a little heavier than usual, but hey, the point of the hair gel is to get you into a position where a woman has her fingers in your hair in the first place, so whatevs, my hair looked great. Was it a little stiff? Sure, but it’s probably because I used an excessive amount when I applied it since it appeared to be like all those other hair gels in squeezable bottles.

The next day, I decided to tone it down a bit by sampling the Spiking Glue for Normal Hair. I also toned down the dosage, but the Spiking Glue, as a man who spikes his hair on the regular, proved to be just that. It was definitely a step down from the paste for Fine Hair in terms of the density of the product itself, and the amount I needed to achieve desired spike level was noticeably less. But it also was a lot more flexible.

So flexible, in fact, that I’d like to think it added a little to my own physical dexterity in my D League recreational basketball game that evening as I contributed 15 points on five threes, in addition to countless good looks. Even when I was drenched in sweat, my bangs remained at full attention and never wavered until the post-game shower.

Knowing the power of both the Paste for Fine Hair and the Spiking Gel for Normal Hair, I approached the Cream Wax for Thick Hair cautiously. And I’m glad that I did, because it was like using a sledge hammer to butter your toast. But it held up under the rigors of playing with my three-year-old daughter in a bouncy house at a birthday party with toddlers flying everywhere. At one point, I feared my spikes might have lanced the bouncy house for their sheer staying power. But they didn’t. And even after that, I stroked my hair and it popped back into position.

While it sounds like a marketing pitch, each of the hair gels really complements the particular hair needs of the men who use them (Puke, I know, but I wouldn’t lie to you, baby — you’re special). Whether you have fine hair or thick hair, AXE has you covered. Choose accordingly and your hair will look great with minimal effort.