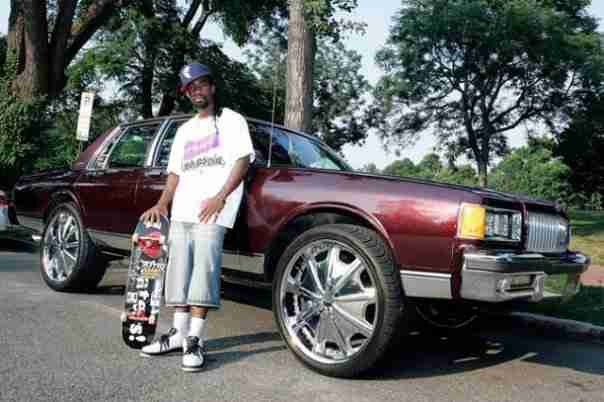 Pro skater Darren Harper aka “DStreets” may be flashy, but it ain’t bragging if you can back it up. And D Harper delivers.

“Nobody can touch me as far as the upbringing I’ve had and I’m flashy, but I’m humble.”

Raised in the streets of Washington, D.C., Harper is helping to bridge the gap between the urban community and street skateboarding for all ages by doing speaking engagements and skating demos for kids.  “When I go to speak to these kids I use the flashy things to show them that hey, you can get this in positive ways. I got a diamond skateboard piece I wear and the kids get mesmerized by that. And I just tell ‘em you can get this in positive ways. And that’s it.”

Your  lovable Douche Bag Paul Eide spoke to the homey and this is what he had to say. So gape you earhole, lube up and lets get it poppin’.

You were instrumental in getting some skate parks setup in DC- what’s going on with that?

“Well, we got our first major park setup by the Maloof Brothers. They actually sent me a message on Twitter one day and I was like, “Is this real?” And it was. We had done an event in the past in DC and that’s when I had gotten the word that they were thinking about putting a skate park in DC. So eventually, down the line, I thought it wasn’t going to be true, but it was true. In DC the city tried to but they never really got w the skaters. They just called people and those people didn’t know what the kids wanted to skate. In every city they should at least get feedback from people involved in the scene.”

Yeah it looked like they just had a bunch of random objects strewn around?

“Yeah that’s it no game plan at all.”

Can you explain what it was like starting in DC when there was almost no skate scene to where it is now?

“Well, first I was living in one of southeast DC’s more notorious neighborhoods and found my first skate board in like ‘89, I found it in a bunch of furniture in front of a house where a family had been evicted. So we was walking and I grabbed it and we just kept it moving. From that day on we’d mess around with it, ride down hills, whatever, just whatever for the thrill. But in like ‘89 or ‘90 there were two shows that came on TV- Skate TV on Nickelodeon and the movie Gleaming The Cube. So when those two came out, it was on. I wanted to do everything, all the moves, that we saw on TV. And that just got me into skating and especially Tony Hawk after that movie came out.

And I was that guy, in ’89, like nine years old when I was skating with my friends, who called out, “I’m Tony Hawk!” you know? And I’d try to do all is moves. He was the most influential person coming up in my life at that time; I didn’t have any role models so we looked up to the neighborhood hustlas who had money and when you’re surround by that stuff in the hood that’s all you saw. So you’d see like Michael Jordan on TV somewhat but there guys in the neighborhood you could touch- it was real. They was making money, driving nice cars and looking successful.”

Southeast DC was run by two crack dealers at the time, right?

“Yeah, I came up in that era. Yeah, Rayful Edmond. And another gentleman I don’t know. The cocaine and drugs affected my household- we’ll just put it like that. It was a cocaine epidemic at that time that I came up. So you can imagine kids skating in that neighborhood, jumping over heroine bags, bums that were passed out, just pretty much everything, seeing people get killed stuff like that. I’ve seen so much coming up that I was right in the middle of that a situation.”

I was near Capitol Hill one night with a buddy and I saw a chick get the crap beat out of her in the middle of the street and we were like “Hey, hey, hey!” and this dude pointed a gun at us and were like “Never mind.”

“Yeah, that’s it. That’s how it is every day. And to be honest, that part is not as crazy as across the bridge where I’m from. It’s pretty chill by Capitol Hill.”

What was it like to be a nine year old kid skating in a neighborhood like that- where no one was skating?

“I got a lot of flak from peers because it wasn’t common for us to skate past a certain age, like past 8 or 9 because here comes the girls, here comes other things, more basketball, just everything. People start looking at me like “Yo- this is the only black kid riding a skateboard.” You know like catching the bus or whatever. So sometimes I had to fight because it would cause a lot of fights.”

What’s it like to be a professional skater on a day to day basis? Everybody probably thinks you’re just chilling out all day, skating, but what’s it really like?

“I mean, for the most part some of that’s right. But I have to train so I skate and go to the gym. I would say it isn’t that different from an NBA or NFL player, really. When I’m riding in my car I look at it like I’m going to my gym, or field, so I’m listening to certain music to get me pumped up. It’s really the same situation because I have to stay in shape. But, it’s beautiful to do something you love to do and get paid. I’ve been able to travel around the world, all because of skateboarding. “

What’s the most random experience you’ve had thanks to skating?

“Well, you may know I’m signed to Travis Barker’s clothing company. One time we were in Vegas- there’s many stories out there, you know- but all of the sudden Paris Hilton popped up and we went to a strip club with her. And I just remember seeing her, just right there.”

Was she cool at all?

“Uh, she was more quiet. She was kickin it with Trav, so it was more like a family type thing where you could ask her a question, whatever. I wasn’t star struck, but I was just chillin, thinking about “Wow she’s worth x amount of dollars”. I was more thinking about, “Wow all this money is right here.” You could just feel it.”

Did she spend any money?

“Nahh, she was just kickin it, coolin out. The things is that a lot of people don’t know is when you get rich like that and everybody knows, you don’t have to spend money anymore- You get stuff for free. They pay you to go to these clubs.”

How’d you get hooked up with Travis Barker’s clothing company, Famous Stars and Straps?

“A friend had an idea who knew I needed to get out of my neighborhood somehow. So he decided to film me skating so we made a video and there was a trade show coming up, the ASR Tradeshow in San Diego.  So we went, passed out some of the DVDs and we saw Travis in his both and gave him one. So I go back home in about two to three weeks later they gave me a call and were like, “Yo we want to work with you.” And that was it.”

Have you met your idol Tony Hawk yet?

“No I haven’t, but when I do I want it to be special because I don’t think he even knows what type of influence he has. Like for instance, right now I do a lot of speaking to kids in the hood and wherever and I try to cater to them as much as possible about showing the right direction. So when I go to speak at schools, his name is the first name to come up- and these are a bunch of afro American kids, which you wouldn’t think. But, that’s the first name that comes up. So I really just want to meet him and say ‘thank you’ for the influence he had on me because really, I wanted to be him. When I was that age I didn’t know him from a can of paint, but I wanted to be Hawk at that age.”