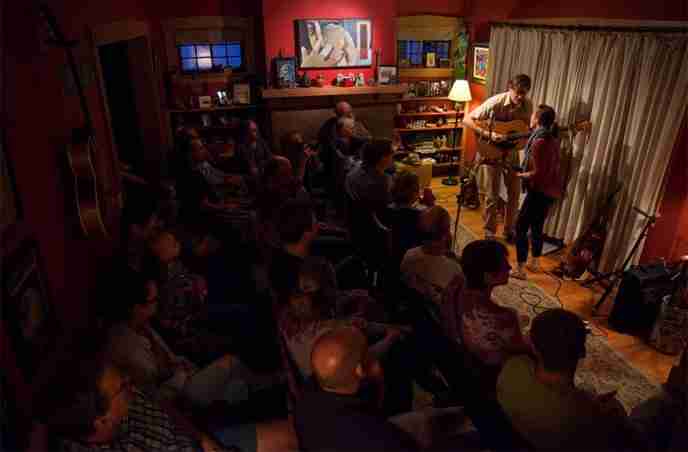 When I think of folk music, I immediately imagine a room filled with a wide variety of people listening intently to a singer emptying a bucket filled with life experience upon the audience.  If this sounds like an enjoyable experience that can be hard to find in the Omaha Metro area, then the FolkHouse is the place for you.

Located at 2440 Fontenelle Boulevard, the FolkHouse is a home owned by Jerome and Diane Brich.  Jerome is an extremely laid back guy who has a great sense of humor.  He is in charge of public affairs at Cox Cable and is also a musician.  He taught himself to play the guitar and the piano and has played in many folk bands throughout his life.  His wife Diane also loves folk music and the idea of musicians coming to her home.  “People can come here, listen to great music, have a good time, and I don’t even have to leave the house”.  Good deal, Diane.

The FolkHouse Concert Series began in May of last year as a way for the Brich’s to “hear the music they wanted to hear and to expose others to folk music”.  Citing disdain for the concert and bar scene in Omaha, they decided to open their home to musicians who were influx between concert venues across the Midwest.  Since Omaha is viewed as a pit stop between Chicago and Denver in the eyes of many musicians, the Brich’s decided to capitalize on their opportunity.  By offering the performer free room and board as well as receiving money donated by the concert-goers, the ground for the FolkHouse Series was established.  There are usually around 10 shows a year depending upon artist availability.  The suggested donation is $10.00;  an extremely cheap tariff when you consider what a treat you’re in for.  Their spacious home is the perfect size for a group of thirty to forty people to jam to some acoustic grooves.  There are no amps or electronic instruments of any kind, just a singer and a guitar.

The Brich’s rely mainly on word-of-mouth for publicity.  Their mailing list includes around 200 people and their email contains around 200 more.  One thing that surprised me was the diversity among audience members.  Jerome told me the typical audience consists of people from ages 15 to 70.  That was exactly what I experienced.  Everyone was very laid back and genuinely happy to see you.  The energy was extremely positive and
non-judgmental, which can be hard to find in this desolate region of our country known as the Midwest.

The average show lasts between 1 1/2 to 2 hours.  Just enough time to have an enjoyable evening and get the kiddies home to bed (children of all ages are welcome).  Guests are also encouraged to delve into a tasty spread of peanuts, cheese, crackers and various other hand to mouth delicacies.  Pop and water are also provided. As far as adult beverages it’s BYOB. So load up the cooler with Busch Lite and throw taste and caution to the wind.

Upon entrance to the FolkHouse you’ll notice an assortment of fold out chairs that unlike a fine wine, DON’T improve with time.  (Being seated is optional.)   Parking can be a little tricky since the FolkHouse is located directly on Fontenelle Boulevard.  My advice is to park in the Holy Name Church parking lot, 1 block away.

On this night I had the pleasure of listening to Cosy Sheridan.  Cosy is originally from New Hampshire but resides in Utah.  Other than being an extremely cool lady, Cosy had the coolest earrings I have ever seen.  Can you beat two pink taster spoons from Baskin and Robbins on a loop?  I didn’t think so.  As you can guess, she had a great sense of humor and it really came across in her music.  Which included songs about women’s restrooms,
not worrying and everything in between.  I implore you to pick up her CD.  You won’t be disappointed.

The next show at the FolkHouse is on May 4th.  The featured performer is Erica Wheeler.  Wheeler who is based in Massachuetts is a singer songwriter who has 4 records to her credit.  She has performed at countless coffee house dates as well as festivals throughout the US and Canada.  Her most recent release “Three Wishes”, is a very personal and expressive album that shows you why the Boston Herald hailed her as a “major talent”.
Wheeler has also opened for such well known acts as Indigo Girls, Shawn Colvin, Iris Dement and Greg Brown.  Acoustic Guitar magazine wrote “this is new folk at it’s best”.  The Kerville Kronical said “Wheeler is in a league that counts such hitters as Cash, Colvin and Chapin-Carpenter”.  Strong claims backed by a strong talent.  Her 1996 Release the “The Harvest” sky-rocketed her to new heights as she spent three months in the top ten of the Gavin Americana chart.  The album sold over 8,000 copies which as a result, allowed her a feature story on NPR’s (National Public Radio) “All Things Considered”.  Her mailing list contains over 5,000 people to date and is constantly expanding to the heights of her talent.

For folk fans who are Jonesin! for the folk, the whole folk and nuthin’ but the folk, check out the Common Grounds Coffee House Concert Series in Benson.  They operate in connection with the FolkHouse Concert Series and donate all proceeds to Habitat For Humanity.  On April 27th, Jim Sailstrom will be performing at the Benson Presbyterian Church Fellowship Hall.  For information contact Kevin Killion at 551-0200.

In my experience I have found folk music to be very unique when compared to other genres.  I haven’t been exposed to much of it, but what I have seen is very intimate because the performer is exposing a part of themselves at a very deep level.  That aspect alone makes it worth while to give yourself a chance to check out the FolkHouse.  So stick your foot into the pool and see just how cold the water is.  In other words, go to the FolkHouse!!!