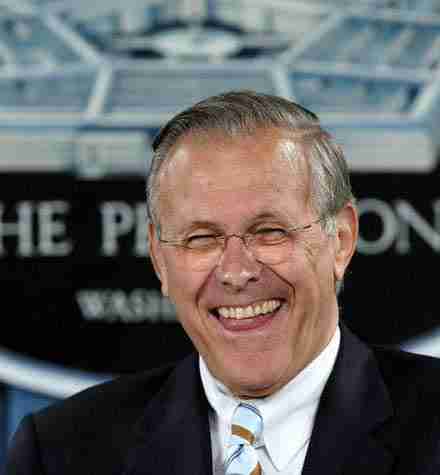 “First we’ll take out Detroit as a sort of practice round while we get a feel for our weapons. Anyone who has ever been to Detroit will tell you that this attack is completely warranted, as the city is a cesspool populated by vagrants and lower rung members of society. Plus, the citizens will be as well armed as our troops, so we’ve got a real fight on our hands.”

“From there, the “War on Peace” will continue with the eradication of several of our natural enemies within the United Nations that have been most noted for their peaceful accords and even more peaceable solutions; Fuckin’ Hippies!”

“Some of these countries will include France, France and uh, this one other one, oh, man, what’s it called? Oh yeah! France!Switzerland is also in the on-deck circle in terms of a full scale military assault, because as far as I’m concerned, all that neutrality during war equals one thing and one thing only: Peace.”

At the conclusion of Donald Rumsfeld’s speech, Capitol Hill’s Cleanup Hitter, President George W. Bush, grabbed the mic and launched into what could only be described as subliminal date rape, but not before giving a few shout-outs to his Homies.

“But seriously folks, this enemy has tried all sorts of angles and sneaky tactics to impose its ruthless agenda upon civilization as we know it. Did you know that they have Peace Training Grounds all over the world? Such commonly known and socially accepted organizations as The Red Cross and The Salvation Army are veritable hotbeds of Peace breeding activity! Not to mention various “Peace Splinter Cells” that are operating independently of the overall Peace network. These are not the cause of Peace, merely tentacles of a ruthless network connected all over the globe united by one underlying theme: Peace.”

“Someone you know, quite possibly sitting in your very home at this very instant, underneath his rage-laden exterior, could be peaceful inside and you wouldn’t even know it! Only when there is constant fighting from all angles at all costs, no matter what the body count, can Peace be avoided. You can’t let these terrorists, or as I like to call them “Peaceorists”, win by not fighting!”

“The wars on Poverty, Drugs and Terrorism will continue simultaneously, although less emphasis will be placed upon them, to the point that you will barely even notice that they have been implemented at all. In other words, it’ll be just like before the threat of imminent Peace. But make no mistake, just because they don’t seem like they’re working, doesn’t mean were not gonna charge you for them.”

“Anyone who goes against the grain will be immediately labeled a “Peaceorist” and removed from the United States. These “Peaceorists” will be placed into an internment camp, have a government mandated computer chip forcibly inserted into the back of their skull, and be shipped off to Kashmir where they will work as rickshaw drivers until we bomb them.”

President Bush eventually concluded his speech while wagging an accusatory finger at the American public.

“Just remember, the next time you’re sitting in your room, getting high by yourself because you have a drug problem, the money you spent on that bag of weed has allowed another jaded “Peaceorist” to purchase a tie-dyed Dashiki from a local thrift store. And to you, sir, I say one thing: Shame on you. Shame On You, Sir!”