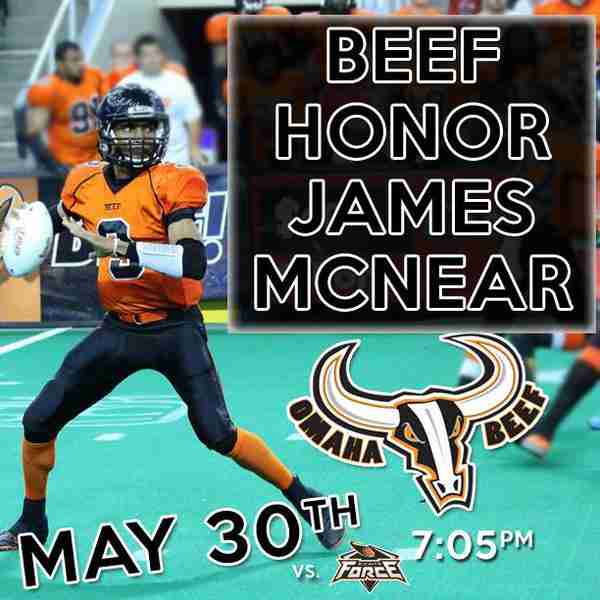 Former Beef quarterback James McNear is the all-time franchise leader in total yards and touchdowns. This Saturday, May 30th, the Beef will honor the most productive player in franchise history with “James McNear Night.”

We asked James 10 questions about his career with the Beef.

Talk about how your career got started. How did you go from playing in college at Concordia University, to playing for the Beef?

I started playing the game of football my sophomore year of high school. I grew up wanting to play MLB baseball, but followed some friends in high school to compete on the gridiron.

After my collegiate eligibility was used, I worked with my agent to determine my future. I was offered an opportunity to play for the Tri-Cities Fever (NIFL) in the 2nd half of their season (2006). During that off-season, a good friend of mine (Omaha Beef running back – RJ Rollins) recruited me, connected me with the owners of the Beef and I came to Omaha that next season to battle for the starting quarterback job (2007).

You’re the all-time leader in Beef franchise history for total yards and touchdowns. How do you explain that level of production in a league where guys tend to flame out?

I think athletes flame out for many reasons. Some get discouraged, some listen to the wrong people, and some just are not built for this intense game.

I was blessed to play at such a high level and have my family there to witness it. The entire McNear family is an amazing support group who helped me stay proud of what I was doing. My wife and children are my driving force and I thank them for being there especially through the tough times!

At the end of the day, if an athlete is not having fun then it makes the game tougher. Safe to say that we had fun here in Omaha.

What was the highest honor you received as a player, that means the most to you?

The highest honor that I received as a player is to be called brother by my peers. I know that’s a bit out of the box, but I did not play the game for accolades. I played to help change lives. Many guys changed my life as well and helped me be a better man. The fans, fan groups, and owners became family to us and that means the most to me!

Who was the best player you played against at any level?

I think it is a tie between 2 Defensive Lineman. Leif Murphy and Matt Moss. They both have a ridiculous ability to accelerate after the snap and beat the offensive lineman across from them, every play. I had my work cut out for me every time we squared off against those guys.

What is your favorite Beef memory? Also, what is your signature play?

My favorite Beef memory is from when we were on the road playing the Colorado Ice. The lead went back and forth during the game. The game was decided on the final play. We were down by 4 points (I believe), on the 20-yard line, and the clock read 00:00.4 seconds (4 tenths of a second). I remember dropping back in the pocket, then escaping to the right. I found RJ Rollins with a pass in the middle of the end zone to win the game.

My signature play was spinning out of the pocket, with Defensive Line or Linebacker pressure, in order to scramble or get the ball down field to a receiver or running back. Worked 99% of the time.

What is the proudest moment of your career as a member of the Beef?

The proudest moment of my career is when we beat the Sioux Falls Storm to end sport’s longest win streak. The stands were packed and we pulled out the W at home.

When the Beef famously offered Tim Tebow a contract, you gave a great quote – “I think he could learn a lot from me.” How did that quote come about?

The funniest thing to me in that dialogue was how the world took it and ran without knowing the back story and what I meant.

I was approached with the conversation that he would be invited to the Beef organization. I do believe that it was a serious inquiry, which is contrary to popular belief, but it could be assumed that he would not sign the contract. There was no malice in what I said, and I honestly did not know he had just been released from his team. What came out of my mouth was maybe ill-timed, but it was genuine. I’m a fierce competitor and by no means would I feel ok relinquishing my position and all that we had worked to accomplish at the time. We all can learn a lot from each other, no matter where we’ve come from.

What is the biggest misconception about the indoor game compared to the outdoor game?

That it is real football and a very tough game. There are high caliber athletes out there on the field.

What are you up to now?

Thanking God for every day that he gives me. Living and loving life. I am a district sales manager for a beverage company. My wife and I also manage our own business with a cutting edge health and wellness company! We enjoy living a life of purpose and fulfillment by helping people realize the importance of amazing nutrition and acting on it! We are also extremely busy with our beautiful children as they are involved in sports and the community. We are actively learning how to give.

What does it mean to you that the Beef are honoring you at a game dedicated to your career?

I am absolutely humbled at the thought of being honored. I do not deserve it. God blessed me through my career so all of the honor is owed to him.

I had hundreds of teammates over the course of my pro football career who are also responsible for the successes of this organization. Beef Lyfe is about family and getting through adversity to see things come full circle.

Come out to Ralston Arena this Saturday night for James McNear Night and the final Beef home game of the season. For tickets, call 402-346-BEEF (2333). Or email [email protected].