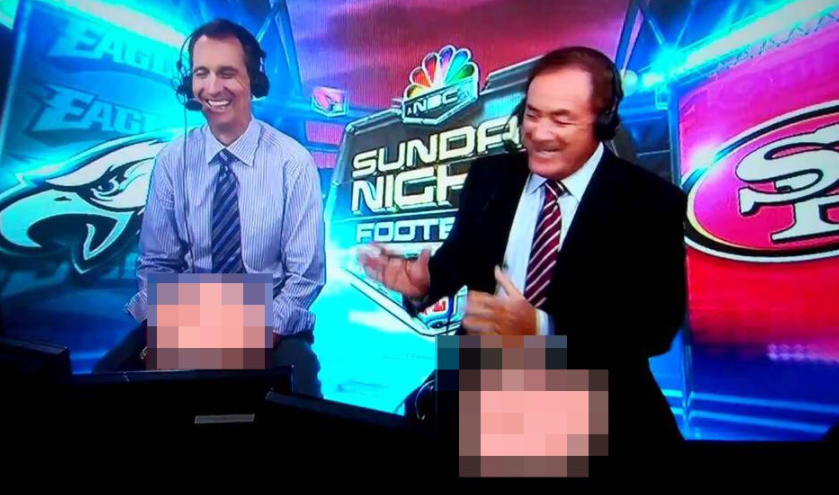 You forget we’ve been slogging thru suck-bag duos like Al Michaels and Cris Collinsworth (who IS the top?) and Joe Buck/Aikman for a combined 400 years.

With all the coronavirus and sports grinding to a halt, I’ve been re-watching some old school NFL classics.

I don’t know about you, but I’m officially sick and tired of the same old hacks calling games for the networks. It is literally the same 4ish guys over and over and over again.

And to make it even worse, a guy like Buck does the World Series. The same guys do everything.

This must be stopped.

Back in the days of MNF’s inception—you had Howard Cosell and Don Meredith bringing their larger-than-life personas to the mics, making the game that much more enjoyable to watch.

Now, we have aforementioned Al Michaels and Troy Aikman pretending they have a personality. Aikman has completed his conversion into poor man’s C Collinsworth.

I never thought I’d long for Dan Dierdorf, but here I am, in heat for the old son of a gun.

Most of the time, I mute the TV and listen smooth Jazz on Pandora just to break even in the entertainment aspect.

But it doesn’t have to be this way, ladies and germs.

We have personalities today that can bring that feeling back to the game—just like John Madden one did.

The last true personality in an NFL booth once said of the 49ers locker room was full of “mud, blood, and boogers and stuff.”

Or an icon like Pat Summerall, a guy who practically INVENTED the pregnant pause. Who knew the importance of not overtalking the sounds of the game.

First off, I think MNF should be restored to its former glory by returning to ABC. And, ESPN be reborn as the rightful owner of SNF.

Face it – it is still weird AF and ESPN has botched MNF.

Bring back Mike Patrick, Paul MaGuire, Joe Theismann. Take the mulligan ESPN, no shame in that.

I do love Kenny Albert as well. And Dick Stockton. And Mark Schlereth. And James Lofton. There is so much talent out there, why the SAME four guys over and over?

Also, the producers need to get out of these guy’s collective ears and let them entertain, rather than call the action and cast meaningless digressions that children could point out.

I’m looking at you Daryl Johnston.

I can see the play that is happening, as it is happening. It does not need to be described to me after it has happened while a replay of the play happening is playing.

Another idea I had, could be used for the Sunday Night game on NBC. I would leave Al Michaels and Collinsworth in the booth if I have to, but I would add a field reporter whose role would be the color man.

Like what Tony Siragusa did in his FOX role, teamed with Moooooose.

My all-time, heaven on earth dream field correspondent would be Bonnie Bernstein. She possesses the perfect mix of attractiveness, intelligence, charm, and football knowledge.

But if we wanna get real weird, bring in the Gunslinger, Brett Favre.

But the fun thing with the Favre idea is that he would suit up in the home team’s uniform and go in for a play or two, mic’d up the whole time.

He could go in a special team’s play, or play free safety in a prevent package, or, in a blowout situation, he could quarterback a series at the end of the game.

Who wouldn’t tune in?

Plus, he would look like a goofy Halloween kid dressed in a Cardinals uni, talking to a live audience, eating hot dogs on air.

A few years back, a mutual friend came up with the idea of broadcasting live over the internet so you could mute the TV and listen to some assholes broadcast from their grandma’s basement in New Jersey. An NJ a-hole like John Franklin would be perfect.

I like the idea, but there is a flaw—the delay.

Depending on what kind of broadcast you watch your game on, the commentary might not sync up with your broadcast (especially DirectTV, which is notoriously 8 or 9 seconds behind a cable broadcast).

The nerds would have to figure this problem out, but I still think this could be done.

How cool would it be to listen to some grassroots dudes calling games using the impacting street vernacular (like “a$-master”) that dudes use? Sign me up!

Another great technological development that I am looking forward to is holograms.

Not only player holograms (just imagine a 3D rendering of RG3 throwing a tud in your living room—we’d start calling him RG3-D, would we not?) but buddy holograms.

My old college roommate lives in Hattiesburg, Mississippi now, so it would be awesome to render his avatar on my couch as we both watch the Sunday Night game in our respective states. Hell, if they can do it to Tupac, they can do it to Black Tim.

In closing, the same 4 guys do not have to be the collective voice until we, and them, collectively DIE — inside and outside.