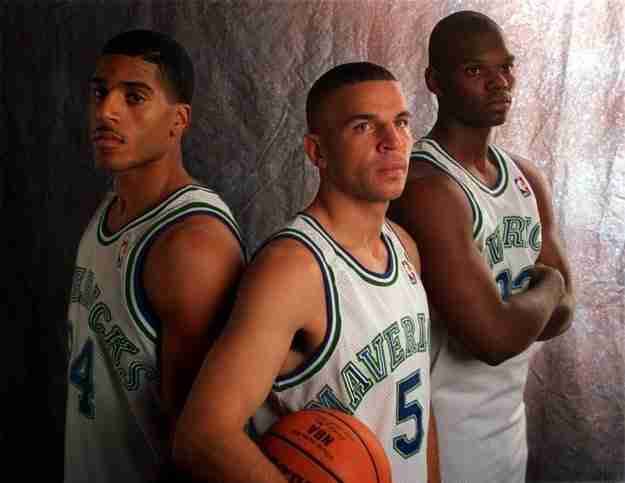 The article I wrote about Golden State Warriors “Run TMC” of the late 80’s and early 90’s got me thinking about other three headed monster combination of teammates. And the next one I thought of was the Dallas Mavericks three headed monster of “Triple J’s”; Jason Kidd, Jamal Mashburn and Jim Jackson, the perfect storm of “J” names.

Their first season together led to the biggest turnaround in the league that season, adding an additional 23 wins compared to the previous season. Which ended up being the only full season the trio would play together.

In what should have been a developmental period, the “Triple J’s” were ultimately disbanded due to, of all things, a love triangle. How very Shakespearian.
Actually, if you Google “Fighting Teammates” Jim Jackson vs. Jason Kidd is near the top of the results. The rumor was (though never confirmed) that R&B singer Toni Braxton went to meet Jason Kidd at a hotel for a date and left with Jim Jackson. After that both players demanded trades and both were granted a couple months apart.
Jim Jackson was selected with the fourth pick in the 1992 draft. Jackson’s career started off with a lengthy hold out that cost him all but 28 games of his rookie season. But more importantly painted him as a malcontent who only cared about himself which turned out to be true.
Ultimately Jackson played for 12 different teams in 14 seasons as a pro, tying the NBA record. In his first five years with Dallas he averaged 19.3 ppg. Little did he know that point would be the high time for production while in the NBA.
Jamal Mashburn was selected fourth overall in the 1993 NBA Draft. Mashburn averaged 19.2 ppg in his rookie season and made the all-rookie team. In his next two seasons he averaged 24.1 and 23.4 ppg, respectively but suffered injuries and struggled with his weight in his fourth season, causing his ppg average to dip to 10.6 ppg.
The Mavericks panicked and after just three seasons in Dallas, Mashburn was traded to the Miami Heat midway thru the 96-97 season. After an additional two years in Miami, the Heat ditched him thinking he was done but they were very wrong. He spent his final four NBA seasons in Charlotte averaging 21.0 ppg and became the sixth player in NBA history to average 20+ ppg in his final season.
Jason Kidd was selected second overall in the 1994 NBA Draft. Of the “Triple J’s” he ended up having the most distinguished career. Everywhere he went his teams won, something you can’t say with certainty about Mashburn and definitely not Jim Jackson.
Stats never really told the full story of how Kidd impacts games but his career averages are still impressive and speak to the well roundedness of his game- 13.2 ppg, 9.1 apg, 6.5 rpg, 2.0 spg.
He’s now made the third most three’s in league history and finally won an NBA title this year after two previous trips with the Nets. How weird is it that he came back to Dallas to finally win one?
Really though, the story of Triple J Ranch is one of mismanagement, which is why Dallas kept getting top five picks in the draft every year and how none of the three players realized their talent to the fullest while in Dallas.