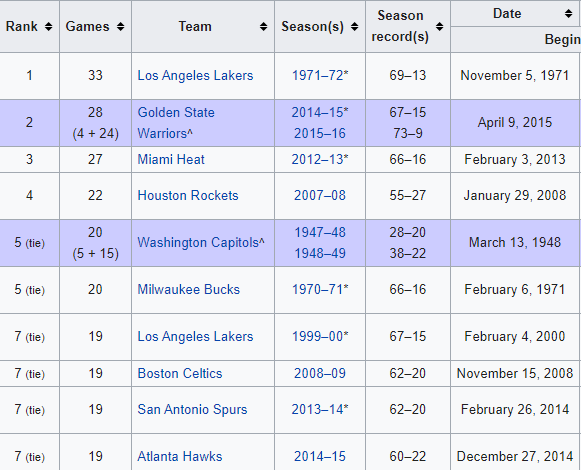 How frequently does a hot start to the NBA season culminate in a championship? Here are the top 6 longest winning streaks to start an NBA season.

With the start of the NBA season, it made me wonder two things; 1) which teams had the hottest start to a season in NBA history, and, 2) how did they finish the season?

When gunning for an NBA title, does it make any difference to start the season with a long winning streak?

Here is what I found.

The Sonics finished 48-34 and lost in the first round of the playoffs.

Five years earlier, the Seattle won the NBA championship, so optimism was still high. But a quick exit in the first round, followed by another first round exit the following season put the franchise in rebuilding mode for the ensuing two years.

The C’s finished 49-23 and lost in the NBA Finals. The Celtics were coming off of winning their first title in franchise history, losing their bid to go back to back by losing in the Finals 4-1 to the Philadelphia Warriors. But don’t feel bad for the 1957-58 squad; the Celtics would recover to win the next eight NBA championships.

The Mavs finished 62-20 and lost in the Western Conference Finals.

The team tied a franchise record for wins with 60, a mark that was eclipsed the following year when they went 67-15. But all the optimism of going 129-35 over two regular seasons was dashed with a first round playoff exit, losing to the eight seed Golden State Warriors in the first round.

The Rockets finished 58-24 and won the NBA title.

With a chance to set the NBA record for longest unbeaten streak to start a season, the Rockets couldn’t overcome a game Atlanta Hawks team during an entertaining 133-111 Hawks victory in Atlanta.

After the loss, the Rockets would win the next seven games in a row, running their record to an impressive 22-1. Hakeem Olajuwon’s “Dream” season was one for the ages. Olajuwon was named league MVP, NBA Finals MVP, Defensive Player of the Year and All-NBA First Team.

The Caps finished 38-22 and lost in the NBA Finals.

The Capitols were part of the Basketball Association of America before being absorbed into the NBA in 1949. The team was led by NBA Hall of Fame coach Red Auerbach, who led the squad from 1946-’49.

The Warriors went 73-9 and lost in the NBA Finals.

Their 73-9 season record beat the 1996 Bulls record of 72-10. Golden State broke over twenty-five NBA records and more than ten franchise records that season, including most wins ever recorded in a season (regular-season and postseason combined); with 88.

However, they would go on to lose the NBA Finals to the Cleveland Cavaliers, 4 games to 3. Which reminds me of how the 2007 Patriots lost to the Giants in the Super Bowl after the first 18-0 season in history.

So, what did we learn? The four of the six teams on this list made the Finals and two of those teams won the championship.

While a hot start doesn’t guarantee end of the season greatness, it’s a strong indicator for how the season will unfold.