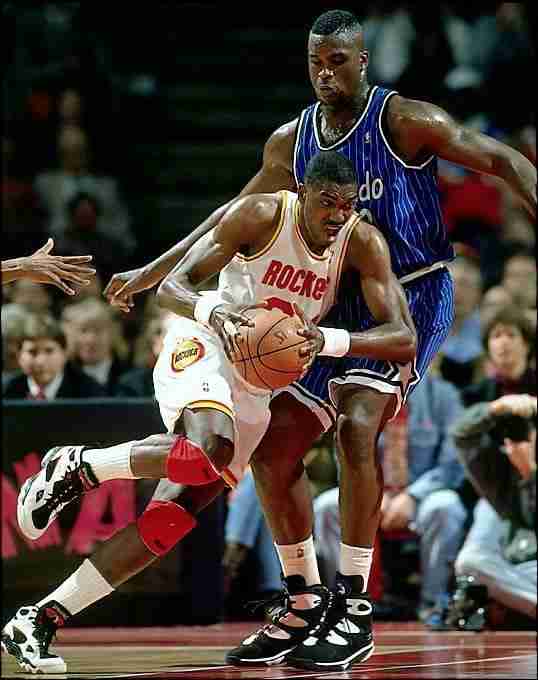 Basketball is a team sport, but when two studs lock horns, the other players on the court recede from view.

Gatorade released an ad for it’s new product “Fixation”,which features Kevin Durant and Dwyane Wade squaring off, each player dreaming of a different outcome when they meet one and each other on the floor.

So it got me thinking: Who are the best one on one match-ups in NBA history?

Here are the first battles that came to mind.

Their match-up in the 1995 NBA Finals has been washed asunder by the tides of history, but at the time, this may have been the best duel I have ever witness. Hakeem was paying the best basketball of his career this season (in the playoffs particularly)and maybe the best stretch for any center in NBA history. Shaq led the NBA in scoring this season (29.3 ppg) and was in the midst of establishing himself as the most physically dominant center ever. In the Finals, Hakeem averaged 32.8 ppg and Shaq scored 28.0 ppg.

In the conversation about the best center of all-time, these two names are really the only two at the top of the list- it’s really just a question of who is 1a and who is 1b.This excellent article breaks it down, blow by blow, and concludes that Wilt is the victor.

50 ppg, 30.1 ppg over his career, 23 rebounds/game over his career, the only non-guard ever to lead the league in assists, 100 points in one game, the list goes on…Wilt was simply more dominating.

This is absolutely the most exciting match-up in the current NBA, with both players battling every night for supremacy. In five playoff games (last year’s NBA Finals), KD outscored LBJ 30.6 ppg to 28.6 ppg. But James dominated in every other statistical category and also won the title, by a margin of 4-1. In 11 regular season match-ups it’s the same story; Durant averages 29.0 to LBJ’s 28.1, “Bron Bron” has the edge in rebounds, assists, steals and blocks and has won nine of the 11 games. “Durantula” has some work to do, potentially in this years NBA Finals.

Of their era, these were the two most athletically gifted, electrifying players. WIlkins at times, looked like he almost had too much energy for his body, while MJ was always smooooooth. In 45 career games against each other, Jordan won 27 while “Nique” won 18. MJ averaged 31.6, while Wilkins poured in 29.8 as both players had almost identical stat lines. In one playoff series that the Bulls swept, Jordan averaged 34.3, 6.7 rpg, 4.3 apg to Nique’s 30.0, 5.3 rpg and 3.0 apg.

The significance of this rivalry isn’t as much about the head to head play, though that was extremely entertaining, but about what it meant to the league- was it not old MJ versus a young version of himself? Kobe Bryant and Michael Jordan played each other 8 times, four when Jordan was with the Chicago Bulls and 4 when he was with the Washington Wizards. The Lakers won 5 of those games. Across these games, Bryant scored an average of 22.8 points, while Jordan scored 24.5 points.

Oh,old man Jordan still has it.