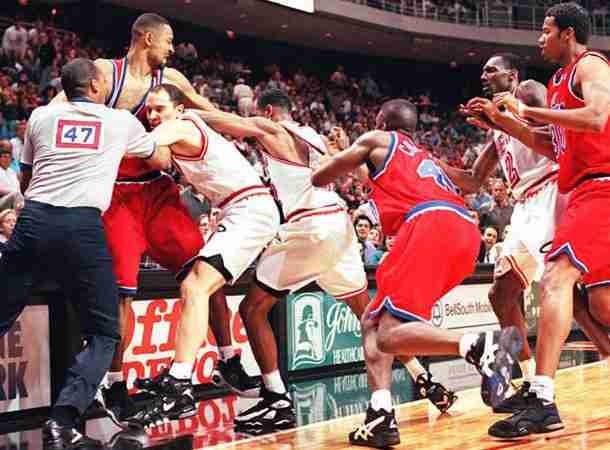 By basketball standards, a “brawl”. is just some pushing and shoving. But there have been times when blows were thrown, and I don’t mean wild over-hand rights that women on Maury through at rival baby mommas, which has sadly become so typical in the NBA.

The NBA of the 80’s was much different. Teams basically had enforcers like the NHL to set the tone or let somebody know enough was enough. Bill Laimbeer is maybe the Bob Probert of this era, but all the great teams, especially in the Eastern Conference, had one. Watch as while Bird is being choked from behind, Erving lands three straight rights to his face. How many games would he be suspended in 2013?  A poster on YouTube summed this up best- “And out of all this, no ejections. They just continued playing like men.”

“Malice At The Palace”

This is the exact moment in time when Ron Artest converted into “Ron Ron.” The level of player on player violence wasn’t that impressive, but the assault on fans was totally egregious and added to the drama. This was just going to be another pushing and shoving match as tensions from a hard fought game finally boiled over at the end. Then, a fan threw a beer onto the court, and “Ron Ron” was born.

While this isn’t much to watch, it was as quick and as violent as any fight in NBA history. Washington delivered a brutal blow to Rudy T’s face that is summed up by Wikipedia- “besides having the bone structure of his face detached from his skull and suffering a cerebral concussion and broken jaw and nose, he was leaking blood and spinal fluid into his skull capsule. His skull was fractured in such a way that Tomjanovich could taste the spinal fluid leaking into his mouth.” Whoa.

This fight had been brewing for years, as the former Charlotte Hornet teammates hated each other. Both players were essentially dealt to different teams because they couldn’t co-exist, which sucked because those Charlotte teams led by Muggsy Bogues were fun to watch. The other indelible image from this fight is Jeff Van Gundy, hanging onto Zo’s leg and getting whipped around like a five year old.

This fight was significant because it was the first instance where the league brought the hammer down on players leaving the bench during a fight, which from that point forward resulted in a mandatory suspension. This fight killed the Knicks season, as Patrick Ewing, Larry Johnson, John Starks and Allan Houston were all suspended for the next two games and the Heat won the series.

I know this is the sixth one, and it isn’t great, but it’s just funny to see Kobe get punched. And, Childs has good hands.