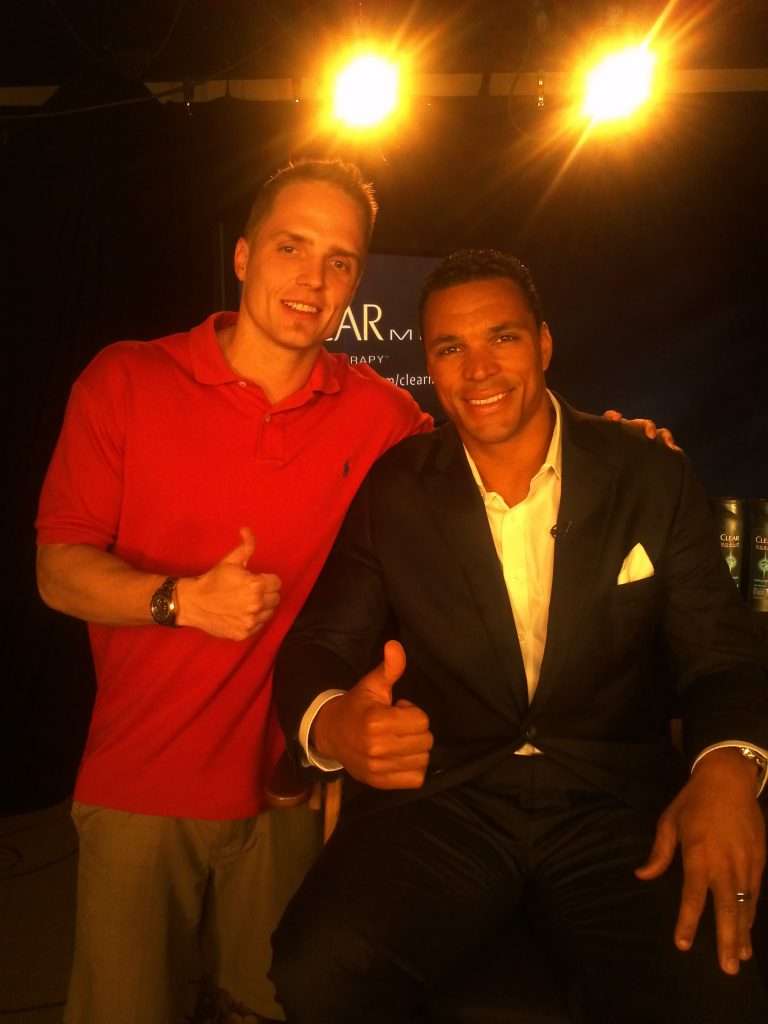 Tony Gonzalez is an NFL icon. Gonzalez has the most receiving yards (14,268) and touchdowns (107) for a tight end in NFL history, and the second most receptions (1,242) all-time, trailing only 49ers legend Jerry Rice.

But even as an all-time great, he is still just a person who puts his pants on one leg at a time; when was the last time he doubted himself?

I sat down with the 17-year veteran Tony Gonzalez and asked about his partnership with Clear Men Scalp Therapy, “Marty Ball” and the evolution of the NFL.

Tony, what’s going on with you and Clear Men Scalp Therapy?

Tony Gonzalez: I teamed up with Clear Men Scalp Therapy because as you strive to be the perfect man, it starts with first impressions. And as a football player wearing a helmet all the time, we deal with flakes.

They have flake free, dandruff free shampoo that really doesn’t dry your hair out and I love it. It smells great and I’m glad to be a part of it.

Speaking of flakes, how has the integration of social media in today’s world changed the way you interact with fans?

Tony Gonzalez: It’s a game changer; everyone has a voice. Let alone just athletes, anyone “famous” or whatever you want to call, everyone gets to voice their opinion. My 12-year-old son has a Facebook and Instagram and he’s like, ‘Dad why don’t you respond to me so I can get more friends?’ and all this stuff.

As the professional athlete, it’s a blessing and a huge tool to reach whatever audience you want to reach. On the flip side of that, it’s a dangerous tool, if it’s used improperly and you see athletes putting stuff out there all the time.

Once you push send, it’s on there forever; for the rest of your life and even when you leave the earth, people are still able to check out what you thought about a certain subject and it can be dangerous.”

How has the NFL changed specifically? It’s become more of a passing league, and when you started, it was “Marty Ball.”

Tony Gonzalez: Well, the rule changes, that’s what I think has been the biggest impact, especially as of late, with guys not able to knock you out when you go over the middle anymore; they can’t hit you in the head anymore.

You’re seeing this level of the spread offenses with the quarterbacks. I think these quarterbacks have greatly improved throughout the league.

There’s always been great quarterbacks: John Elway, Dan Marino, Joe Montana. But now, you’re seeing guys like that on each team — guys that have that ability to spread the ball around, you see it all over the league. Peyton, Tom, Drew Brees, Aaron Rodgers, Matt Ryan… and there’s plenty of other guys I can name that all have that ability to spread the ball out. It’s tough for defenses to stop us now because of the rule changes, but I’m not going to complain about it.

Tony Gonzalez: Probably not during a game. (Laughs) During practice, usually during camp, I start to question myself. “Man, I might be too old for this… my body hurts.” But that’s what camp’s all about.

When that creeps up, and that’s totally normal, that happens. At the same time you need to say, “Shut up, I’m here, I’ve worked hard, I’m here for a reason and I’m here to get the job done. I’ve done it before and there’s no reason I can’t do it again.