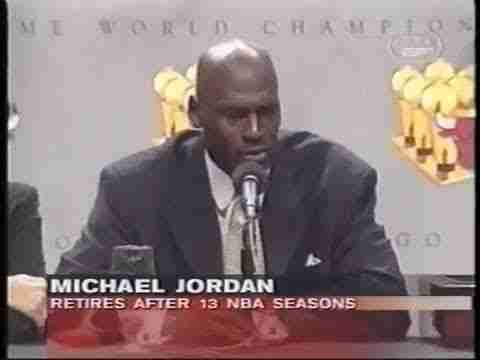 On 1/13/99, Michael Jordan retired from the NBA for a second time. He just kept “playing with our emotions”, like Smokey from the movie Friday.

MJ’s first retirement took place on on 10/6/93 and was a complete shock. No one could believe that Jordan, at the top of his game (leading the NBA the previous season in both scoring and steals), was serious. But after the murder of his father, he decided to make the move to professional baseball. Jordan famously came back a year later and won the NBA title in three straight seasons for the second time.

Jordan’s retirement in 1999 was again surprising considering the level his game was at (leading the league in scoring with 28.7 ppg), but not surprising considering the state the Bulls were in at the time. Jerry Krause was hell bent on tearing apart the team and rebuilding. Phil Jackson’s contract was up and everyone knew he wouldn’t be renewed, as was the same for Dennis Rodman, while Scottie Pippen forced his way out via trade demand.

But perhaps as impactful as any other factor, the NBA was mired in a lockout, which would limit the upcoming season to just 50 games. So MJ would’ve had to come back and play without Pippen, Rodman, or Phil Jackson, while also missing several other key components of the championship squad who were either dealt or released. In a lot of ways, Jordan’s back was against the wall; it was time for him to do something else.

Eventually, Jordan would return to the NBA almost three years later for his final act and what is potentially his most impressive feat; During the 2002-03 season, Michael Jordan turned  40 years old.

It wasn’t like MJ was only playing 20 minutes a game, hanging on even though his physical skills had disappeared. That season he played 37 mpg, second on the team only to Jerry Stackhouse. He was also second in points to Stackhouse (20.0 ppg), second in rebounding (6.1 rpg), fourth in assists (3.8 apg) and first in steals (1.5 spg). He was even fourth on the team in blocks, of all things with 0.5 bpg. He was also the only Wizards player to appear in all 82 games, starting 67 of them.

That season he averaged 18.6 shots per game which was the second lowest of his career and a full four shots less per game than his career average of 22.9. Jordan scored 20 or more points 42 times, 30 or more points nine times, and 40 or more points three times. Though it wasn’t rare for us to see MJ score 40+ throughout his career, the three games of 40+ represent the only times in NBA history a player over 40 years old has ever  scored that many points.

Regardless of how you feel about his time as a Wizard, Jordan’s second retirement marked the end of an era for the league because it was a symbolic ending to those great Bulls teams of the 90’s.