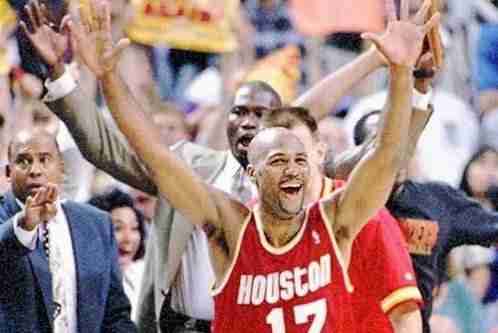 20+ years ago today, Mario Elie’s Kiss of Death three-pointer capped off a ridiculous comeback against the Phoenix Suns. Phoenix dominated the regular season for two years, only to be eliminated in the playoffs by the streaking Rockets both times.

“Houston’s Mario Elie sank a three-pointer from the corner with 7.1 seconds left in the game, lifting the visiting Rockets to a 115-114 win over Phoenix in Game 7 of their Western Conference Semifinal Round series at America West Arena. With the win, the Rockets became the first NBA team in 13 years (since the ‘82 Sixers against Boston) to overcome a 3-1 deficit to win a best-of-7 playoff series. Houston’s victory also broke a string of 20 consecutive wins by the home team in the deciding Game 7 of a playoff series. Just 24 hours later, Indiana repeated that feat by the road team after downing host New York 97-95 in Game 7 of their Eastern Conference Semifinal Round series.”

Check out the video here:

For Elie, it was the beginning of what would be a pivotal role during the Rockets run to the 1995 NBA title. After being a bench player all season, Elie was inserted into the starting lineup for the Finals and played the best basketball of his career. Elie averaged 16.3 points per game, almost double his regular season average, while shooting a 64% from the field. He was also 8 for 14 (.571) from the three-point line, hitting 7 of 10 three-pointers in Games 3 and 4.

The Rockets were already a ridiculously deep squad, so when Elie stepped up and started producing, the Orlando Magic had no answer as the Rockets romped to a 4-0 series sweep.

The shot Elie hit to seal the series victory over the Suns was particularly deflating to Suns fans. Not only because it ended their ’95 season, but the previous year in the playoffs the Rockets also defeated the Suns in a seven game series after the Suns opened up a 3-1 series lead.