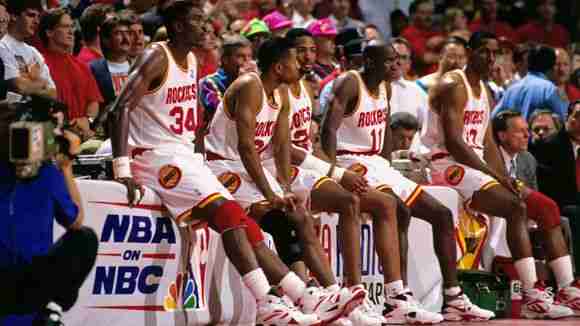 25 years ago on 12/3/93, The Houston Rockets lost their first game of the year. The 15-0 start to the season tied the all-time record for longest winning streak to start an NBA season set by the Washington Capitols in 1948-49.

Just as it did for the 1995 Chicago Bulls, a hot start to the season ultimately culminated in a championship for the Houston Rockets. With a chance to set the NBA record for longest unbeaten streak to start a season, the Rockets couldn’t overcome a game Atlanta Hawks team during an entertaining 133-111 Hawks victory in Atlanta. After the loss, the Rockets would win the next seven games in a row, running their record to an impressive 22-1.

On pace for a video game like four loss season, the Rockets came back to earth from then on and finished a subdued 36-23 over the final 59 games. The up and down nature of the season continued in the playoffs as well. After easily dispatching the Portland Trailblazers 3-1 in round one, The Rockets nearly had an early postseason exit when they lost the first two games of the conference semifinals to Phoenix at The Summit in Houston. The Rockets won three in a row, lost game six in Phoenix and then returned to Houston for the decisive game seven victory.

The Rockets versus Knicks Finals was one of the most physical in NBA history, even to this day, thanks to each team’s emphasis on tough defense and a grind it out approach on offense, working the ball through Hakeem Olajuwon and Patrick Ewing, respectively. For the first time since the introduction of the shot clock in 1954-55, neither team reached 100 points in any game of a seven-game playoff series. Not since 1975 had there been a Finals series in which the margin of victory in every game was less than 10 points, until this one.

The Rockets won the series 4-3, securing their first title in NBA history.

Hakeem Olajuwon’s “Dream” season was one for the ages. Olajuwon was named league MVP, NBA Finals MVP, Defensive Player of the Year and All-NBA First Team.

Though a win in Atlanta on 12/3/1993 would have set a new record, it’s safe to say the Rockets were satisfied with how the season ended.