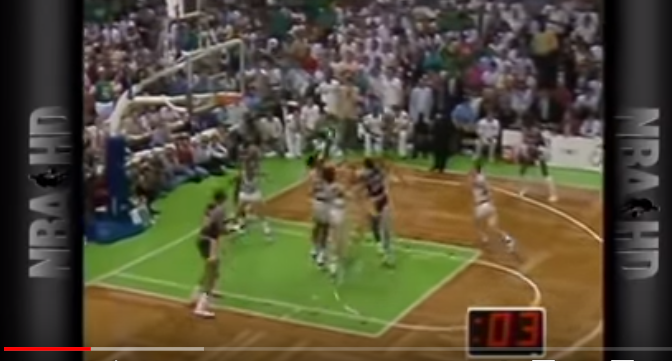 On 6/11/87, Magic Johnson created potentially his most memorable play: Magic made victory appear out of thin air in with his Junior Hook Shot to win Game 4 of the NBA Finals at the Boston Garden.

After the Lakers had won the first two games of the series, the Celtics responded with a clutch victory in game three, the importance of which was not lost on Larry Bird. “”This (Game 3) was the most important game of the series for us,” said Bird. “If we lost, it might’ve been tough to get up for Game 4. Now it’s going to be easy.”

The Celtics came out hot to start. Boston took a 16-point halftime lead, but the Lakers chipped away at it until they were within eight points with three minutes left and down just 103-102 with 30 seconds to play.

The last thirty seconds of game time perfectly illustrate why these Lakers versus Celtics match-ups of the 1980’s have been so revered, and their merit has remained, over time.

Kareem Abdul-Jabbar scored on an assist from Magic via the pick and roll to give the Lakers a one point lead. Bird came down and hit a difficult three-pointer from the corner to give the Celtics a 106-104 lead with 12 ticks left.

(Interesting side-note: In the footage of the shot, watch how much of Bird’s jersey James Worthy has in his hand, and for how long he held it, prior to Bird getting free to take the shot. And NO ONE complains to the refs. That’s the way it used to be kids; a totally different game.)

In the ensuing possession, Abdul-Jabbar gets fouled and makes one of two free throws, missing the second, which was ruled to have been tipped out of bounds by the Celtics. Thus, the stage for one of the greatest plays in NBA Finals history was set.

Magic got the ball and took advantage of being guarded by the larger, slower Kevin McHale after switching on a screen.

Magic dribbled, hesitated to get McHale off-balance, then drove into the key. Magic then lofted his famous hook shot, which just cleared the fingertips of both McHale and Parish, and swished through, giving the Lakers a 107-106 lead with only two seconds left.

In the press conference after the game, Johnson labeled the shot “my junior, junior sky-hook,” after Abdul-Jabbar’s favorite weapon.

The Lakers went on to win the series, and the NBA championship, in six games.