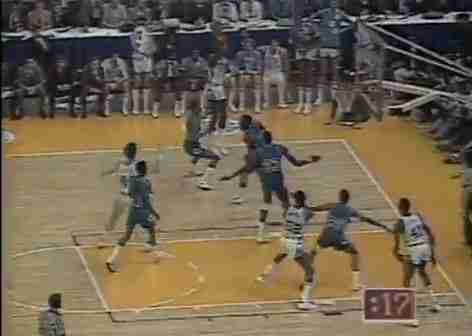 Today in 1984, the Chicago Bulls signed #1 draft pick Michael Jordan. And, they got the greatest basketball player ever at a discount.

Thanks to his ridiculous success as a professional, it’s easy to forget how great MJ was as a college player.

In 1981, as a freshman at North Carolina, Jordan was named ACC Freshman of the Year after he averaged 13.4 points per game on 53.4% shooting. He made the game-winning jump shot in the 1982 NCAA Championship game against Georgetown, which was led by future NBA rival Patrick Ewing. Jordan later described this shot as the major turning point in his basketball career.

After winning the Naismith and the Wooden College Player of the Year awards in 1984, Jordan left North Carolina one year before his scheduled graduation to enter the 1984 NBA Draft. The ChicagoBulls selected Jordan with the third overall pick, after Hakeem Olajuwon (Houston Rockets) and Sam Bowie (Portland Trail Blazers).

So I was curious; what did the #3 overall draft pick, and future greatest player ever make during his first year under his rookie contract? $630,000.

People talk a lot about how data-scayt_word=”LeBron” data-scaytid=”8″>LeBron James, thanks to the current CBA, can never be paid what he is actually worth.

But Michael Jordan set the precedent in that regard, as he did in so many other areas of professional basketball.