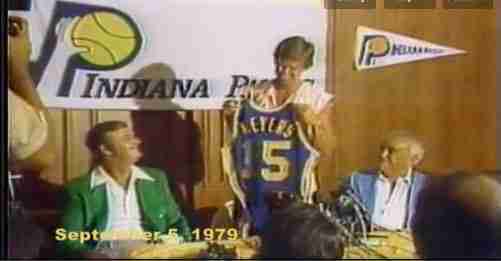 Today in 1979, Ann Meyers signed a deal with the Indiana Pacers. Meyers became the first woman signed by an NBA team.

Meyers remains as the only woman to ever sign a contract with an NBA team, signing a $50,000 contract.

She worked with the team through training camp before eventually being cut. But, it was not a publicity stunt, as Meyers was one of the best basketball players in the world at the time.

Meyers received an athletic scholarship to play for the UCLA Bruins women’s basketball team, the first woman to be so honored at any university. In a game against Stephen F. Austin on February 18, 1978, she recorded the first quadruple-double in NCAA Division I basketball history, with 20 points, 14 rebounds, 10 assists and 10 steals. Since then, University of Tennessee at Martin junior guard Lester Hudson is the only other Division I basketball player, male or female, to have done so.

Meyers was a member of the US team that won the 1975 Pan American Games Gold medal She played on the US Olympic basketball team that won a Silver Medal in the 1976 Summer Olympics in Montreal.

After she was cut, Meyers became a color commentator for the Pacers, one of few women to ever achieve that feat at the time. Since 1983, she has served as an ESPN analyst for various events including both men’s and women’s NCAA basketball games.

For over 26 years, she has served as a network television sports analyst for ESPN, CBS, and NBC.

Goodbye Kobe, I Love You