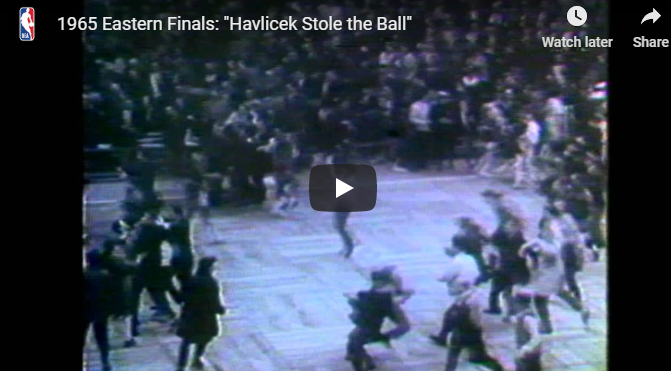 On April 16th 1965, one of the most indelible moments in NBA history happened — “Havlicek stole the ball!” The play itself is almost more famous than the players involved.

John Havlicek’s steal might be the most famous play in NBA history. And it couldn’t have come at a time that was more dramatic.

It happened with five seconds left and the Boston Celtics clinging to a precarious 110-109 lead over the 76ers in Game 7 of the 1965 Eastern Conference Finals. As Philadelphia’s Hal Greer got set to inbound the ball from the baseline under his own basket, Havlicek peeked over his shoulder.

Anticipating a lob pass, Havlicek tipped the ball to teammate Sam Jones, who dribbled out the clock as the fans at Boston Garden—and Celtics broadcaster Johnny Most—went into a frenzy. “Havlicek stole the ball! It’s all over! It’s all over!” bellowed Most as the Celtics won en route to their seventh of eight consecutive NBA titles.

Havlicek went on to score over 26,000 points in an NBA career that lasted 16 seasons, but he is best remembered for that steal immortalized on tape by the late Johnny Most.

There are two things from that video that are awesome, that I’d love to know the answer to.

1) Why did Havlicek force that last shot, that almost went in? He literally had to force it up over a couple of fans on defense, who had stormed the court.

2) Where is that famous ball, NOW? Watch carefully and you’ll see some dude in a suit had the presence of mind to grab the ball and bolt off the floor, but not before shoulder checking someone on the way out.

Best NBA Hairstyles of the ’90s