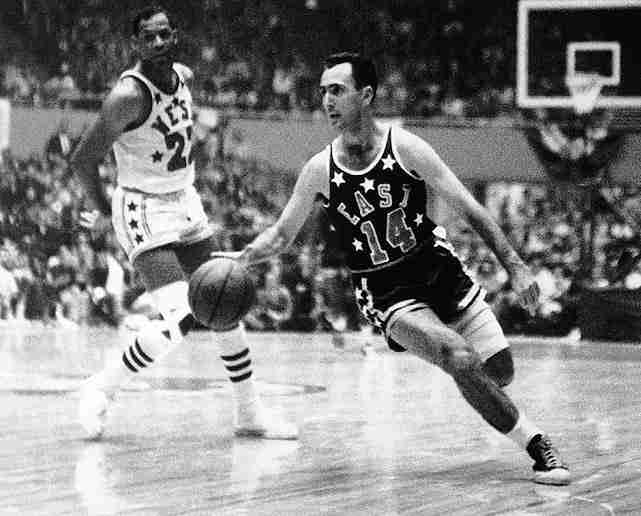 Today in 1954, the NBA All-Star game had the first overtime game in its history. Bob Cousy stepped up and delivered.

The legendary Boston Celtics guard poured in 10 points during the overtime period and gave the East a 98-93 victory, also garnering All-Star MVP honors in the process.

This game was so long ago that George Mikan, the original “big man”, played in it, going just six of 18 from the field and nearly fouling out. Dolph Schayes is the only other name I could recognize besides the aforementioned Cousy and Mikan. But what’s interesting about that is that even the average NBA fan knows those names, which shows you the kind of impact they made on the game and the league.

In ’84, Isiah Thomas took home MVP honors after a 21 point, 15 assist, five rebound game. In ’87, Seattle’s Tom Chambers won the award while he was playing for the Supersonics, accumulating 34 points as the games leading scorer.

In ’93, with the game held in Utah, John Stockton and Karl Malone were named co-MVP’s of the game, which was as absurd and partial as it sounds.

In ’03, the first double OT game in history occurred. Kevin Garnett was named the MVP after scoring a game high 37, making three straight baskets in the second OT. Interestingly, this was Michael Jordan’s last All-Star game.

As the years have gone on, the games have become more and more competitive, with the last three games being decided by a total of 10 points. But it all began back in 1954.