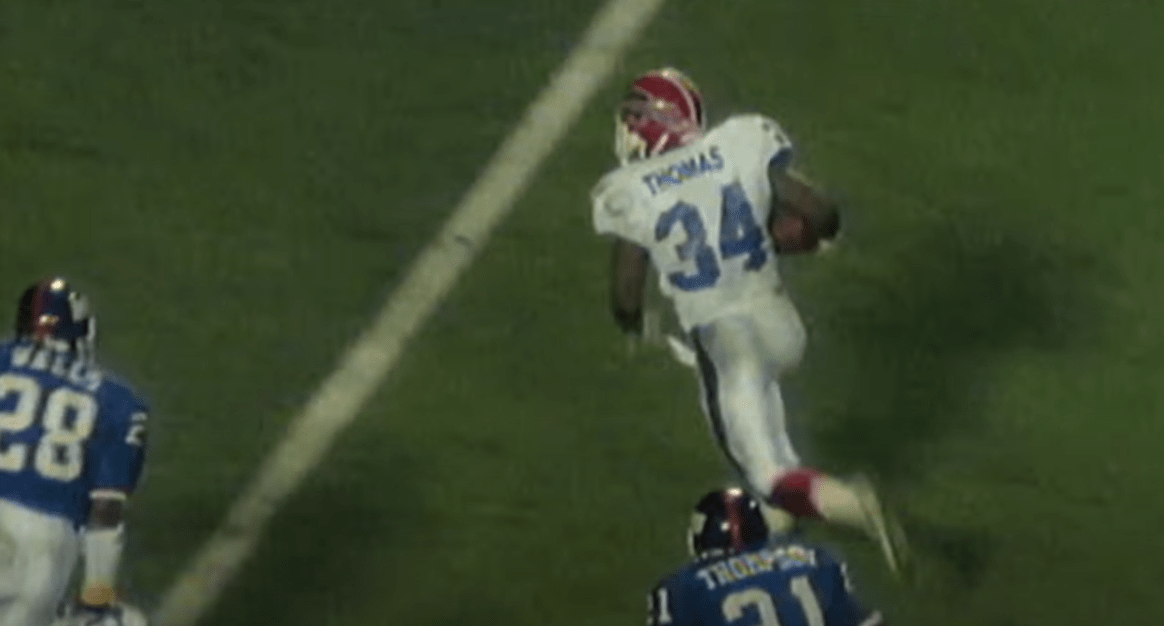 Thurman Thomas is possibly the most underrated running back in NFL history.

He has the 16th most rushing yards in NFL history (right behind Franco Harris) and is one of only 16 players to rush for 12,000+ yards in his career.

He is 12th all-time in yards from scrimmage with 16,532, right behind Adrian Peterson, and scored a total of 88 TDs in 13 seasons.

I spoke to Thurman just a few hours before he was returning to his old high school to speak to the kids.

Are you excited to go back to your old high school today?

Are you nervous at all?

Nooooooo, not at all!

You just picture everyone naked and you’ll be fine, right?

On a day like today, going back to your old high school, does it make your career and everything else you’ve experienced since high school seem surreal?

Thurman Thomas: It really does. Because you leave high school and you go to college and you really don’t know what’s in store for you for the rest of your life. To go back to where it all began, where you started putting in the hard work, the commitment to try to get a scholarship, go to college, you look back at it and it’s amazing.

I graduated from high school in 1984, so it’s been a long time. It’s back in those days at willow ridge high school (235). So yeah you look back at your career and you’re like, “Wow, you really accomplished a lot!”

Coming from a small type of community that only had one high school, to have played in the NFL and played in a Super Bowl, you look back and it is really something special.

And the music back in 1984 was better, Thurman. Let’s be honest.

Yes! See, I go all the way back to like the Isley Brothers, Earth, Wind, and Fire – stuff today just isn’t like that. Some groups are, but not a lot.

I can’t do it. I had Al Green going this morning when I was working out; I woke up this morning and “L-O-V-E” was in my head, I HAD to do it!

So talking about high school and going into college and not being able to anticipate what is going to happen, at Oklahoma State you teamed up with Barry Sanders.

Is there any way at the time you would’ve guessed your careers would’ve gone the way they did, and can you talk about you relationship?

Thurman Thomas: It’s funny because obviously I was at Oklahoma State a couple of years before Barry and then he got there, and we became really good friends.

We played the same position and then to top it off, I leave, I get drafted by Buffalo, he stays an extra year, wins a Heisman, and then he gets drafted by the Detroit Lions which is not too far away from Buffalo.

“All of those years we became, and still remain to this day, really good friends, and is a very special guy to me. And every time I always talk about him, I always bring up the fact that he is the greatest running back to ever play the game.” – Thurman Thomas on Barry Sanders

Why has the running back position been devalued so much?

Thurman Thomas: I think when you have guys like Tom Brady, Drew Brees, Aaron Rodgers, Peyton Manning, guys like that who are going to throw the ball 40 to 50 times a game, then yes, the running back position has been devalued over the past five or six years.

It’s been an unbelievable 10, to 15, to 20 years that we’ve had these great quarterbacks that have come into the NFL and throw for a lot of yards and touchdowns, I don’t think you have guys like that coming out of college anymore.

Obviously there are going to be a couple that throw for 4,000-5,000 yards, but the number of quarterbacks like the ones we’ve seen for the last 20 years, I don’t think they are going to be there anymore. And now, you’re starting to see the running backs coming to the forefront again.

That’s a great answer and a great point, and I hope you’re right Thurman! I’m an old schooler and I want mean tackling, I want physicality!

Speaking of that, that era of football, most of the time there was were about three feet of snow on the ground and it was about 20 degrees.

Can you talk about playing in those games, particularly the 1993 Divisional Playoff game against the Raiders in Rich Stadium; how were you able to move the ball? It was the coldest game I’ve ever watched on T.V., from the comfort of my living room, Thurman!

You know, it’s just one of those kind of things where we had West Coast teams coming into Buffalo and after being there for a number of years, and playing like that, and Marv Levy being our head coach, we practiced outside a lot; we did that.

We suffered through the elements of practice and when it came to game day, we were more prepared. A lot of things that teams do when it’s cold, they put on more layers of clothing, they got these sleeves, the thermals under their pants. And we just figured, “Let’s go out and just be comfortable.”

And when you look at old games like that, guys didn’t wear sleeves; we just played the game. We just wanted to be comfortable and the way you do that is practice early in the week, and then later it’s time to play the game, and you don’t even worry about that.

Talk about Coach Marv Levy. Here’s this little guy, full of fire, an English major, dropping all this science about World Wars and everything, what was he all about?

Like you said, him being a history buff, and an English buff, all of the things that he would say would be related to football. And that was the kind of guy he was as a coach.

Even though he was the head coach, he wanted to know about your family. How’s your wife, how’s your kids, that sort of thing and he let us become men. To try and be the best football players on and off the field we could possibly be.

And he still runs about 3-4 miles a day! That’s inspiration right there!

How hard was it for you to accept your career was over, and when it was time, what made you commit to it?

Thurman Thomas: I figured, I had played 13 years and when I tore my knee up in 2000, I was ready to go – I wasn’t going to be one of those athletes that hangs on for a number of years and not really perform the way I wanted to perform.

You get to that point where you know you can’t do it anymore and obviously that is what Kobe was thinking too. The last couple of years he’s been injured and just realized his body couldn’t do it. That’s how athletes are, and that’s how I was.

To me, I still had a life to live, and I want to be able to walk. At the time I hurt my knee, I was 34-years old and ready to go. I knew what I had in store for me. I’ve got a beautiful wife of 30+ years and four lovely kids, so I wanted to spend the rest of my life with them and be able to do things with them. I knew that day would come, so I prepared myself for it and it made it a lot easier.

Who was the toughest defender you ever faced – the hardest hitter, the meanest guy, who’s the first guy that comes to mind?

Thurman Thomas: That guy would definitely be Ronnie Lott.

He was a beast. I only played against Ronnie probably 10-12 times, but when would flip on the tape and look at what was going on, that was a guy that I always said I didn’t want to be on any highlight films of Ronnie Lott. He was a guy that, I wasn’t afraid of, but I was always aware of where he was on the field.

With that being said, the scariest guy that ever played was Lawrence Taylor. I only played against Lawrence maybe 4-5 times, but it’s one of those deals where you walk into the meeting room on Monday morning, and you say, “OK, where is #56?” Those two guys right there, loved to compete against them, but really hated to play against them.

With those two guys, is it just something inside of them? There are a lot of guys with their physical attributes, but is there just some fire inside of them that makes them like that, or what is it?

I don’t know if it was a fire inside of them. I just think they were two very smart, intelligent football players. They could sniff out a play before the play even happened. That’s how high their IQ was.

Ronnie Lott always put himself into position where he didn’t have to run 20-30 yards across the field to make an interception; he would already be in position. The intelligence, the IQ of those two guys, really set them apart.

One thing that has further endeared you to Buffalo, is that you’ve come back and live there now, as well as your former quarterback Jim Kelly. As a player, what was it like to have an entire city behind you? Is it something you can feel when it is going on?

I think it’s different because we were in Buffalo. You think of the cold weather, you think of the winter. But for me, I grew up in a small town outside of Houston. I played college in Stillwater, Oklahoma, another small town.

I just love it up in Buffalo, another small town. The people are amazing, and we have about 75 former players who live in the Buffalo areas, going back to the 60s, 70s and 80s. It’s a great community.