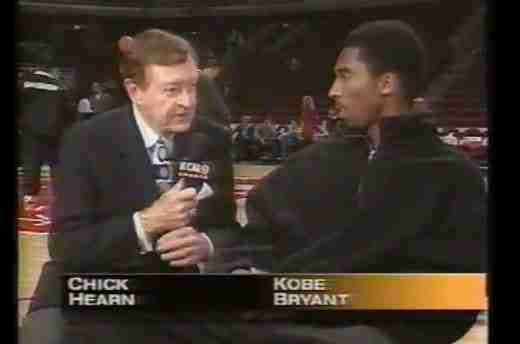 In 2002, Lakers legendary announcer Chick Hearn passed away. Hearn’s voice may be the most recognizable of any announcer in NBA history.

In terms of legacy and impact not only on his teams organization, but the sport as a whole, there are only a handful of announcers who have had the kind of impact Chick Hearn did.

Hearn broadcast 3,338 consecutive Lakers games starting on November 21, 1965 and ending with midway through the 2001-02 season on December 16, 2001 when he underwent cardiac bypass surgery. After the surgery he was pumping gas and fell, breaking his hip, which kept him out even longer.

But Hearn returned; the final Lakers game he called was Game 4 of the 2002 NBA Finals where the Lakers defeated the New Jersey Nets to win their third consecutive NBA championship.

Aside from having a singular voice that essentially defines the Lakers thanks to broadcasting the biggest events in the history of the franchise, Hearn made lasting contributions to the sport as well.

Hearn is credited with inventing the terms “air ball”, “slam dunk” and “no harm, no foul.” He also did games on both radio and TV which was almost unheard of at the time.

During the summer of 2002, Hearn suffered a fall at his home and hit his head. Three days later, on August 5, 2002, Chick Hearn died from his injury. He was 85 years old.

Hearn is most known for his work with the Lakers, but he had a particularly varied career with success in sports broadcasting.

From 1956 on, he called USC football and basketball games, the US Open, the Rose Bowl and even the first Joe Frazier vs. Muhammad Ali fight, to name a few.