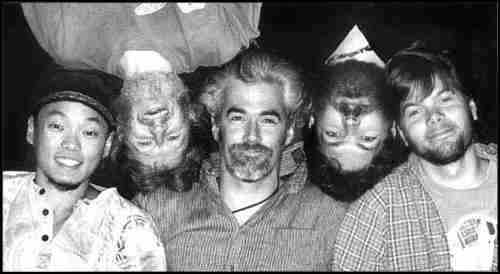 On July 9th and 10th, nationally recognized jam band “The String Cheese Incident”, will be performing at Westfair Amphitheatre.  Also performing are special guests Femi Kuti, who will perform on the 9th, and Karl Denson who will perform on the 10th.  The two-day show is a concept that is unique in today’s musical landscape and seems to be favored mostly by bands labeled as “Jam Bands”.  I asked Billy Nershi, guitarist and vocalist for The String Cheese Incident, for his definition of a “Jam Band”

“I think that a jam band is a band that is into a different musical experience every time they step onto the stage.  The main thing is that the musicians, who are performing, are not trying to control the music and drive it in a certain direction.  fun and it’s a great experience, every time.”

As far as the idea of a two-day show, I had two immediate visions in my head: 1. Woodstock ’99: The result of the corporate pimping of the music industry and a lot of fire. 2. A bunch of scantily clad long-hairs running around bitching about The Man.  Billy, however, was able to quell both of my fears.

“Our fans are like no other fans on the planet.  The crowds are always big, but there is never any trouble.  Everyone is there to have a good time, relax and spread the love.  Everyone is accepted and it’s great to be a part of.”

The domineering entity known as corporate America has a major impact on much of the music industry; but not The String Cheese Incident.  The fan base proves to be an intricate part of the bands over all marketability, which is effective in many ways.  The Internet is a tool that is relied heavily upon as it appeals to the masses, but with a very personal feel.  The bands website (stringcheeseincident.com), lends access to everything a “cheesehead” could want; Ticket reservations, clothing, CD’s, and even a travel agency that helps fans arrange transportation plans to see shows at various locations.

One thing that I found to be truly amazing about TSCI is the amount of direct involvement the fans have with the band.  At the grassroots level, fans volunteer to distribute handbills and posters in an attempt to be labeled “pirates”; devout followers of the band.  The “pirate” list contains over 4,000 names of people who are willing to do anything for their cheese.  “We get 200 letters a week from people asking to help.” says staffer Reis Baron.  “It’s like an army of positivity.”

Fans also have their tentacles in the realm of merchantability, as well.  Brad and Mandy Mastrine, fill merchandise orders for TSCI and receive hundreds of orders a week from different countries such as the US, Japan and Canada.  “The music inspires us”, says Mastrine.  “Our goal is to spread the music and see the band become huge.”

Thanks to fans with this sort of dedication, the TSCI website receives around 125,000 hits each week.  That isn’t just dumb luck, though.  The Cheese create much of their own luck by playing an average of 150 shows a year.

The band celebrated the end of last year by hosting 2001: A String Cheese Odyssey on New Years Eve.  The event took place in Portland, Oregon and lasted over the course of 3 days.  21,000 people attended the show as it drew rave reviews from industry magazines across the country.  On the bands immediate agenda, is “Hornings Hide Out”.  This is another multiple day event (similar to 2001:ASCO) that is set to take place at the Oregon Country Fair, just outside of Portland.  The tentative dates are listed as Friday, August 10th thru Sunday August 12th.  Check the website for details.  When asked to describe the environment of the anticipated festival, Billy responded,”Freaks, hippies, lots of hair and a ton of beads.”
TSCI will be touring all summer to promote their newest album release, “Outside, Inside”.  It marks the bands fifth release on their own record label, Sci-fidelity, and is their first studio recording in nearly two years.  The new release also marks the initial collaboration with TSCI and uber-producer, Steve Berlin.  Berlin has produced albums for industry heavyweights like Paul Simon, Tragically Hip, and The Crash Test Dummies.  I asked Billy how working with Berlin affected the final outcome.
“It was great because he wouldn’t let us record a song over and over.  As an artist, you want your art to be perfect, but sometimes you can be overly consumed by that desire.  Steve knew when we were done with a song and all of the songs on the album were recorded on the first, second or third take and that was it.”  TSCI was thrilled to work with Steve Berlin and looks forward to future encounters.

The album, “Outside, Inside”, is very cool and contains many musical influences.  After listening to the album, it is very easy to ascertain how this band can get lost in the music and play for hours.  Billy added,  “The music on the album is a mix of blues guitar, bluegrass, salsa and meringue, and just about anything else you can imagine.  It is a very positive album, which is rare in today’s music industry and we take a lot of flak for that.  The corporations that control much of the music you hear, think that’s all there is a market for.  However, that’s just not the case.”

It’s true; the music on the album is supremely positive and uplifting.  Track #2, “Joyful Sound”, is a great example of where the positivity flows out of the speakers like a dense fog.  The album also contains songs and long groove jam sessions where you can just sit and chill out.  The music is driven mostly by acoustic guitar, but not completely.  The organ is also utilized beautifully as the various instruments form into a solid blend of unique sound.  Track # 8, “Latinissimo”, is a great interlude of a song that opens the listeners’ musical ear to sounds of a definite Latin persuasion.  With the beats, rhythms and various instruments employed on the album, it is very easy to see how fans morph into “pirates”.

With the majority of the interview under wraps, there was one final question that demanded closure.  The answer contained earth-shaking ramifications: Is Mr. T the baddest man on the planet?  “I pity the fool who messes with Mr.T.  If you haven’t had his cereal, you haven’t lived, man.” replied Billy.If you don’t believe Billy Nershi about the cereal thing, rent Pee Wee’s Big Adventure.  If I can’t get through to you, Lord knows Pee Wee can.

Tickets for The String Cheese Incident and their guests, are 25$ for a single day pass, and 45$ for a two day pass.  All ages are welcome and tickets are also available at SCI Ticketing-www.stringsheeseincident.com- 303 544 5875 or Ticketmaster (If you absolutely HAVE to!) 402 422 1212. (Lose this number, man.)