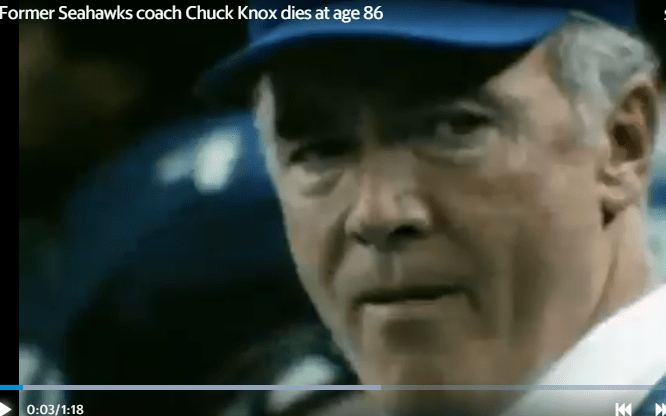 Chuck Knox is kind of an enigma for modern day NFL fans. You hear his name enough to be familiar with it, but you’re not entirely sure why.

Historically speaking, Knox is known for his playoff futility as much as Marty Schottenheimer; he never advanced to a Super Bowl but had plenty of success.

Also similar to Schottenheimer, Knox was known as a run first coach in terms of offensive game planning, which earned him the nickname “Ground Chuck.”

In 1973 he was hired to coach a Rams team coming off of a 6-7-1 record and from that year to 1977 he put together what is possibly the greatest five year regular season run in NFL history.

Playing only a 14 game schedule, the Rams won at least 10 games each year, winning 12 of 14 twice and five straight NFC West division titles.

From 1974 to 1976, the Rams advanced to the NFC Championship game three times but lost every game.

In 1978 Knox left the Rams and was hired to coach the Buffalo Bills.

In year one, the team went 5-11 but in year three the Bills went 11-5 and won the AFC East title before losing in the playoffs.

The following season he led the Bills to a 10-6 record, another playoff appearance and actually won a game before getting bounced.

Ultimately the Bills didn’t resign him, so Knox was hired to coach the Seattle Seahawks in 1983 and enjoyed success immediately.

Chuck Knox took a team that hadn’t had a winning in record four seasons to the playoffs, won two playoff games, and made it to the AFC Championship game before losing again, the fourth and final loss in a Conference Championship game during his career.

The Seahawks went 12-4 the following season and won a playoff game but were then eliminated. Two years later, Knox’s Seahawks went 10-6 in 1986 and didn’t make the playoffs followed by a 9-6 and then a 9-7 season (the franchise’s first division title in history) where they made the postseason but lost in round one both times.

If we exclude the second tenure with the Rams, in 19 years as an NFL head coach Knox’s teams made the playoffs 11 times and won seven division titles.

Whether you exclude the second stint in St. Louis or not, Knox was the first coach to win division titles with three different teams (Schottenheimer being the second).

Is Chuck Knox the greatest coach in NFL history to never win a Super Bowl? Or is he too similar to Marty Schottenhemier and they cancel each other out?

Related articles for your pleasure: