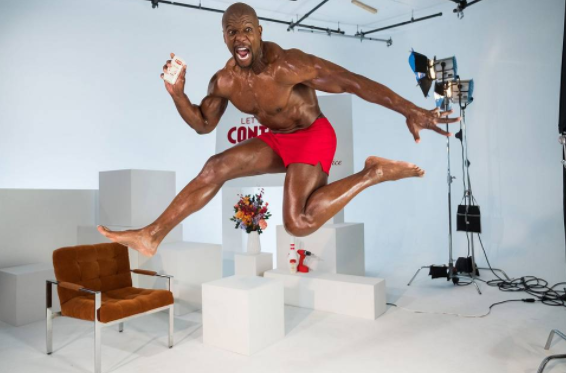 Terry Crews knows a thing or two about being a MAN. The former professional football player turned actor turned Old Spice pitchman teamed up with the brand to launch the “Contempor-MANLY” campaign to celebrate 80 years of Old Spice.

Just as Jeffery Lebowski wondered allowed “What makes a man?” to The Dude in The Big Lebowski, I asked Terry several questions about successfully sailing the seas of manhood.

You played professional football for 6 years. Was there a time when you were completely emasculated and who did it?

Yes. It was when I was playing for the San Diego Chargers when I knocked myself out on a kickoff return on Monday Night Football. What could be more emasculating than that? I was running down the field on special teams and knocked myself out on national TV. It was like, suddenly I was on the ground and I didn’t know what happened. I was able to make it to the sidelines with the help of a few teammates. I really didn’t notice the affect of the hit until I was standing there. We were playing the Indianapolis Colts and I kept looking at their helmets thinking, ‘What does the U stand for, Utica?’ I had no idea what was going on, was almost completely senseless.

What is the number one lesson in masculinity that guys overlook most frequently?

Probably that it’s OK to be sensitive. And have multiple interests. I mean there’s this sort of alpha male archetype of a guy like James Bond. The thing about James Bond, or Magnum P.I. is that all those guys ended up alone. John Wayne or any of those guys really, all end up alone in their garage working on stuff. I don’t want to be alone. I want to spend time with my wife and kids. The other thing there is for guys that’s important is finding what makes them truly happy and it’s actually very simple. If there was something that you loved doing as a kid, chances are you probably will still love it now. So why stop doing it? You have to have fun and love what you do and who you do it with. I love video games. My son and I just built a computer together to play video games on.  So now something that I love is what he also has interest in and we can do it together.

I loved art as a kid all the way up until college. I even received an art scholarship in college. And it was difficult for a lot of people to wrap their minds around that. I also love playing the flute. And painting, still to this very day. And in that time period in the 80s, masculinity was thought of as this thing where you had to be hard and tough all the time, particularly for me as a football player, a guy who looked rough and looked the part. So it’s been really cool to see how society has evolved since then, to where it is now. There is a lot more tolerance and less focus on what a man ‘should’ be versus what he is. The tough guys who aren’t in touch with the multiple facets of their personality end up a lone and I don’t think a lot of guys want to be that. I know I don’t!

Give me an Ice Cube Westside Connection body guard story; do you know all the lyrics to Bow Down?

Well actually, I was not technically his bodyguard. I was working as a security guard in the lot where he was filming Next Friday. So I would see him every single day and we got to know each other. I was literally a guy in a shirt that said ‘Security’ on it carrying a flashlight. And from there I got cast in the follow-up to that movie Friday After Next. The stories about how we met aren’t entirely accurate, but it’s been great to see how it all evolved. It really helped me start my career as an actor and was part of what got me to where I am right now. I don’t know all the lyrics to Bow Down. But, ‘when you come to my town you got to BOW.’

Personal question Terry – when did you start to go bald and begin losing your hair?

Talk about the “Contempor-MANLY” campaign you are working on with Old Spice.

Believe it or not, this is Old Spice’s 80th birthday! And to me as a kid some of my earliest memories are my dad using the old ceramic bottle with the boat on it. Nothing can take you back in time like the sense of smell. Old Spice has launched a new collection, the 80th Anniversary Capsule Collection. Old Spice is the number one selling deodorant/anti-perspirant and body wash brand with guys of all ages. And with our “contempor-MANLY” live stream and video available after the stream is over, viewers can tell me what type of contempor-MANLY tasks they’d like me to complete. I’m taking suggestions from viewers and then the viewers vote, and I perform that task. For example, should I fold my laundry or ponder my future? Should I hammer a nail or get a full body work out in?